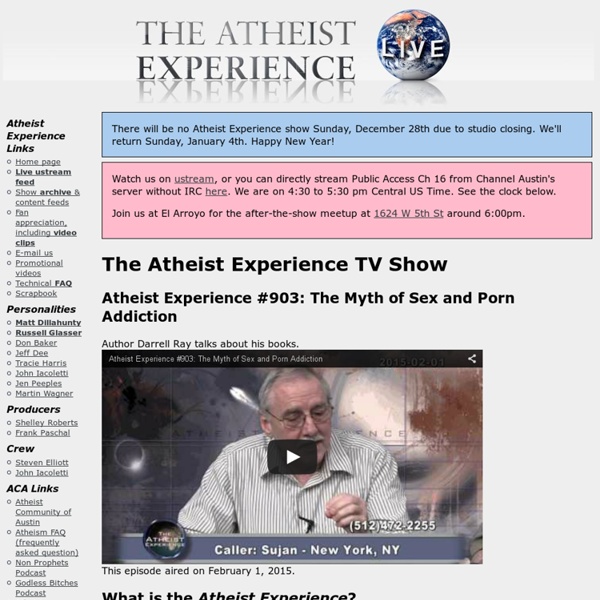 The Skeptic's Dictionary - Skepdic.com The Non Prophets: An Austin-based Internet Radio Show Removing the linchpin of Christian hate | Mercy not Sacrifice People hate each other for all kinds of sinful reasons. In my life, I’ve hated people unfairly before, usually out of some sort of envy or paranoid presumption about what somebody else thought of me. It’s different when people hate out of devotion to God. Two nights ago, when I took a look at Way of the Master evangelist guru Ray Comfort’s account of his airplane evangelism, it was jaw-dropping to see the contempt he held for the people he was witnessing to. I don’t think that Comfort is an evil person; I think he genuinely believes that God wants him to hate ungodly people. I’ve told the story several times about the misfortune of 11th century monk Anselm who was just trying to come up with a logical explanation for why Jesus had to be God and man and had no intention of laying the groundwork for the most toxic feature of contemporary American evangelical theology. “There is no one who is righteous, not even one; there is no one who has understanding, there is no one who seeks God.

Great Atheist Videos Email Our official Youtube channel can be found by clicking here! Here is a *HUGE* collection of the Youtube videos on various atheism-related topics. The Web’s Best Videos on Evolution, Creationism, Atheism, and More! This video series meant a lot to me. BEST ATHEISM SERIES ONLINE! Here is a wonderful site with links to 600 debates between atheists and theists. 600+ Atheism Theism Debates Some of our favorite videos.. A concise indictment of Christianity by Christopher Hitchens New Testament scholar Dr. The Problem of Divine Hiddenness – One of the most powerful arguments against the Christian god. Sam Harris demonstrates why morality cannot be dependent on the Christian god. Why Scientists don’t believe in hell… or god. Dan Barker shows how religion twists the moral compass of Christians using a simple thought experiment. A brief summary of why the bible should not be taken seriously. “Atheists, what if you’re wrong??” Why miracle stories should not be taken seriously. Dr.

Richard Dawkins and male privilege Over the weekend, a full-blown scandal erupted in the skeptical movement atheist and skeptical communities* over sexism and attitudes about sexual harassment. It started with a fairly straightforward story about a clueless man putting a woman in an uncomfortable situation. The conversation about it was interesting, to say the least. This point was driven home when Richard Dawkins spoke up about it. Here’s what happened, boiled down from a video post Skepchick Rebecca Watson made about this (she tells this story starting at 4m30s into the video at that link). If the story ended here there would be obvious things to say about it (obvious to me, at least, but not everyone, as will become quite clear). Rebecca, apparently, handled this situation with aplomb, and I’m glad. At this point there are many offshoot discussions and tangential topics being discussed on the skeptical blogs and elsewhere. It took me a moment to parse this. At first I thought I had misread this. Oh my. This.