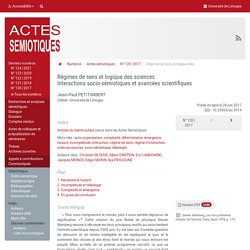 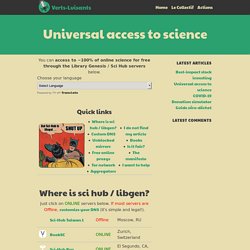 Choose your language Powered by Translate Quick links Where is sci hub / libgen? Just click on ONLINE servers below. Custom DNS Most likely, your access to Sci-hub is blocked by your Internet Service Provider. Windows Watch this video or open network and sharing center > click on your connection > properties > Internet Protocol IPv4 > properties and replace the DNS fields with the one from OpenDNS or Google. Mac. Publications scientifiques en ligne. Tabletop Whale. Sixty Symbols - Physics and Astronomy videos. 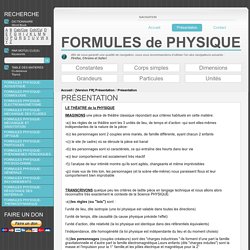 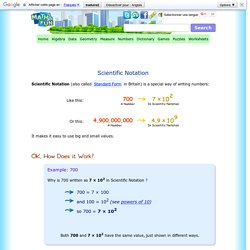 OK, How Does it Work? Fundamental Frequency and Harmonics. Previously in Lesson 4, it was mentioned that when an object is forced into resonance vibrations at one of its natural frequencies, it vibrates in a manner such that a standing wave pattern is formed within the object. 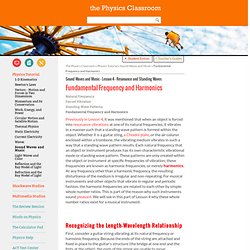 Whether it is a guitar sting, a Chladni plate, or the air column enclosed within a trombone, the vibrating medium vibrates in such a way that a standing wave pattern results. Each natural frequency that an object or instrument produces has its own characteristic vibrational mode or standing wave pattern. Logique. The Logic Lab: simulating simple circuits of logic gates. Logic Puzzles. Iris AI - Your Science Assistant. Making Sense Of Complexity – Sarah Firth – Medium. Chaos Theory: A Brief Introduction. What exactly is chaos? The name "chaos theory" comes from the fact that the systems that the theory describes are apparently disordered, but chaos theory is really about finding the underlying order in apparently random data.

When was chaos first discovered? The first true experimenter in chaos was a meteorologist, named Edward Lorenz. In 1960, he was working on the problem of weather prediction. He had a computer set up, with a set of twelve equations to model the weather. Figure 1: Lorenz's experiment: the difference between the starting values of these curves is only .000127. When he came back an hour later, the sequence had evolved differently. By all conventional ideas of the time, it should have worked. This effect came to be known as the butterfly effect. MIT Physicist Proposes New "Meaning of Life" MIT physicist Jeremy England claims that life may not be so mysterious after all, despite the fact it is apparently derived from non-living matter. 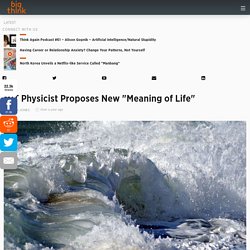 In a new paper, England explains how simple physical laws make complex life more likely than not. In other words, it would be more surprising to find no life in the universe than a buzzing place like planet Earth. What does all matter—rocks, plants, animals, and humans—have in common? We all absorb and dissipate energy. While a rock absorbs a small amount of energy before releasing what it doesn't use back into the universe, life takes in more energy and releases less. [S]imple physical laws make complex life more likely than not. According to England, the second law of thermodynamics gives life its meaning. Physics. WAVE the theory of everything ! SVP Universal Cosmology - Part 1 of 17. What’s Really Inside A Proton? At a fundamental level, the Universe is composed of indivisible particles. 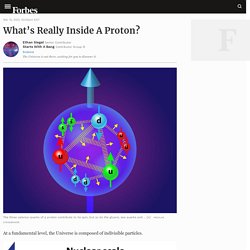 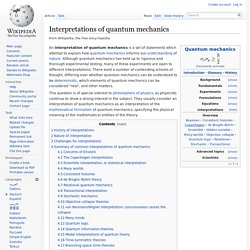 Can two versions of reality exist at the same time? 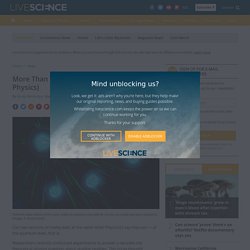 Physicists say they can — at the quantum level, that is. Researchers recently conducted experiments to answer a decades-old theoretical physics question about dueling realities. This tricky thought experiment proposed that two individuals observing the same photon could arrive at different conclusions about that photon's state — and yet both of their observations would be correct. For the first time, scientists have replicated conditions described in the thought experiment. Their results, published Feb. 13 in the preprint journal arXiv, confirmed that even when observers described different states in the same photon, the two conflicting realities could both be true. Un esperimento indica che non esiste una realtà oggettiva. Ma cosa significa per la meccanica quantistica? What Is Nothing? A Mind-Bending Debate about the Universe Moderated by Neil deGrasse Tyson.

By Maria Popova “You can’t assert an answer just because it’s not something else.” 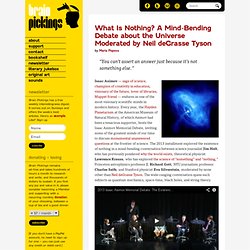 Isaac Asimov — sage of science, champion of creativity in education, visionary of the future, lover of libraries, Muppet friend — endures as one of the most visionary scientific minds in modern history. Every year, the Hayden Planetarium at the American Museum of Natural History, of which Asimov had been a tenacious supporter, hosts the Isaac Asimov Memorial Debate, inviting some of the greatest minds of our time to discuss monumental unanswered questions at the frontier of science. The Trouble with Theories of Everything - Nautilus - Pocket. Whenever you say anything about your daily life, a scale is implied.

Try it out. “I’m too busy” only works for an assumed time scale: today, for example, or this week. The Official String Theory Web Site. Complex Adaptive Systems. Feedback loops: How nature gets its rhythms - Anje-Margriet Neutel. The music in this lesson was composed by Ross Allchurch. Feedback What is feedback? It is a process that is the result of mutual causal interaction: X affects Y and Y affects X. The mutual causal interaction creates a circuit of effects, so that any change in X, causing a change in Y, in turn causes another change in X, and so on – a feedback loop. Feedbacks are either positive or negative. Feedbacks affect the way every single variable, every population in an ecosystem for example, responds to both internal and external perturbations.

Helter Skelter: Negli aeroporti americani conosceranno il teorema di Bayes? Study suggests humans are only capable of having five people in their closest circle. (Phys.org)—A trio of researchers affiliated with the University of Oxford in England and Aalto University School of Science in Finland has conducted a study of human behavior and has found evidence backing up a prior theory that suggests humans have different layers that make up their social circle with different numbers of people in them. In their paper uploaded to the preprint server, arXiv, they describe their study which involved analyzing cell phone records to count calls, what they found and that they believe it means for us a group. One of the researchers, Robin Dunbar, was part of a team that back in the 1990's studied the correlation between brain size in primates and the number of individuals in their social groups. They found that the bigger the brain, the more members of their groups. More recently, he and colleagues have conducted some experiments that suggest that humans have layers or groups of contacts, with the closet layers having fewer people, and the farthest, more.

Epistemology. Epistemology. Chaos. Scientific method. Post-Modern Science: The Illusion of Consciousness Sees Through Itself    We have always struggled with the limits to how human language can express our thoughts about reality. But post-modern science dismisses the struggle as futile: We did not evolve to perceive reality. That conviction is changing cosmology dramatically. We know almost nothing about the human consciousness but naturalism must treat it as evolved from unconscious elements. Much confusion is avoided by recognizing that that is a core assumption, not a discovery. Frank Wilczek on Beauty, Physics, and Philosophy. We recognize beauty when we see it, right? Michelangelo’s David, Machu Picchu, an ocean sunrise. Could we say the same about the cosmos itself? Algorithmicity, Islamic Art, and Virtual Philosophy: Thoughts on Laura Marks’ ‘Enfoldment and Infinity’

One of the most incredible works of architecture I’ve ever seen: The Hall of the Two Sisters in the Alhambra, Granada. The dome is composed of a multitude of tiny, pixel-like cells known as muquarna. “The universe is not dualistic, but folded, so spirit is separated from matter only by degree” – Laura Marks, Enfoldment and Infinity: An Islamic Genealogy of New Media Art (2010, p. 271). Möbius strip. Fractal patterns in nature and art are aesthetically pleasing and stress-reducing. Humans are visual creatures. Life as Art: The Legacy of Lynn Margulis. A New Theory of the Universe: an article by Robert Lanza about biocentrism building on quantum physics by putting life into the equation. Scientific Method: Relationships Among Scientific Paradigms. To see the full map of relationships among scientific paradigms, click here or on the image below.

Complexity. Il dizionario della complessità. Paradigm Of Complexity. Too complex to exist - The Boston Globe. Empirical Zeal. The Philosophy of Science Directory. Edge - All Conversations. Structure of scientific revolutions. Rationality. Rational Wiki - Main Page. TalkOrigins Archive: Exploring the Creation/Evolution Controversy. Falsifiability of evolution. A Newly Drawn Tree of Life Reminds Us to Question What We Know About the History of Earth.

Red Queen Hypothesis - The Evolutionary Arms Race. Richard Dawkins. Why Life Does Not Really Exist. ANIMAUX. The tardigrade genome has been sequenced, and it has the most foreign DNA of any animal. How to Find and Care for a Pet Tardigrade ( Water Bear ) Il Candirù (Vandellia cirrhosa), il peggior incubo degli Indios - Microbiologia Italia. L'énigme des nuées d'étourneaux. Altre preistorie. The Hundredth Monkey Revisited. Why do chimpanzees throw stones at trees? Mysterious Chimpanzee Behavior May Be Evidence of "Sacred" Rituals.