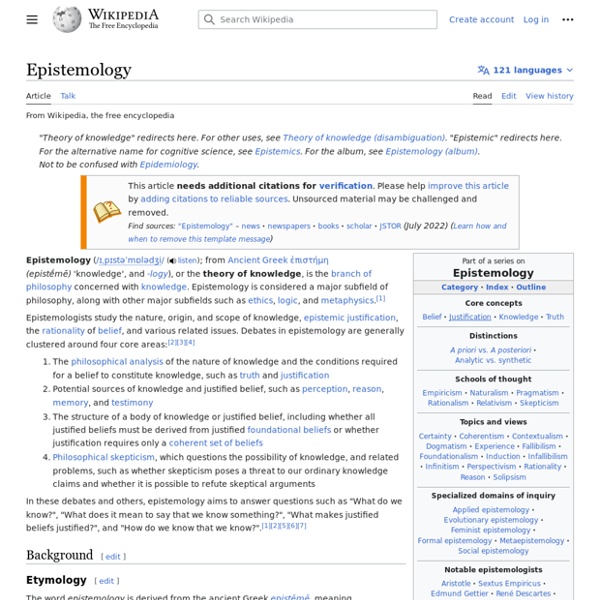 Ontology Parmenides was among the first to propose an ontological characterization of the fundamental nature of reality. Etymology[edit] While the etymology is Greek, the oldest extant record of the word itself, the New Latin form ontologia, appeared in 1606 in the work Ogdoas Scholastica by Jacob Lorhard (Lorhardus) and in 1613 in the Lexicon philosophicum by Rudolf Göckel (Goclenius). The first occurrence in English of ontology as recorded by the OED (Oxford English Dictionary, online edition, 2008) came in a work by Gideon Harvey (1636/7–1702): Archelogia philosophica nova; or, New principles of Philosophy. Containing Philosophy in general, Metaphysicks or Ontology, Dynamilogy or a Discourse of Power, Religio Philosophi or Natural Theology, Physicks or Natural philosophy, London, Thomson, 1663.[5] The word was first used in its Latin form by philosophers based on the Latin roots, which themselves are based on the Greek. Overview[edit]

Write! People really like the original Write app. It’s powerful, it’s simple, and it’s only 99 cents. But for more advanced writing experience, we introduce you to Write 2 and What Is Love? Famous Definitions from 400 Years of Literary History by Maria Popova “Love has nothing to do with what you are expecting to get — only with what you are expecting to give — which is everything.” After those collections of notable definitions of art, science, and philosophy, what better way to start a new year than with a selection of poetic definitions of a peculiar phenomenon that is at once more amorphous than art, more single-minded than science, and more philosophical than philosophy itself? Gathered here are some of the most memorable and timeless insights on love, culled from several hundred years of literary history — enjoy. Kurt Vonnegut, who was in some ways an extremist about love but also had a healthy dose of irreverence about it, in The Sirens of Titan: A purpose of human life, no matter who is controlling it, is to love whoever is around to be loved.

Nervous system The nervous system is the part of an animal's body that coordinates its voluntary and involuntary actions and transmits signals between different parts of its body. Nervous tissue first arose in wormlike organisms about 550 to 600 million years ago. In most animal species it consists of two main parts, the central nervous system (CNS) and the peripheral nervous system (PNS). Protocol (object-oriented programming) The protocol is a description of: Note that functional programming and distributed programming languages have a concept which is also called a protocol, but whose meaning is subtly different (i.e. a specification of allowed exchanges of messages, emphasis on exchanges, not on messages). This difference is due to somewhat different assumptions of functional programming and object-oriented programming paradigms. In particular, the following are also considered as part of a protocol in these languages: The allowed sequences of messages,Restrictions placed on either participant in the communication,Expected effects that will occur as the message is handled.

Reductio ad Absurdum reductio ad absurdum (also known as: reduce to absurdity) Description: A mode of argumentation or a form of argument in which a proposition is disproven by following its implications logically to an absurd conclusion. Arguments that use universals such as, “always”, “never”, “everyone”, “nobody”, etc., are prone to being reduced to absurd conclusions. The fallacy is in the argument that could be reduced to absurdity -- so in essence, reductio ad absurdum is a technique to expose the fallacy. Logical Form: How a Radical New Teaching Method Could Unleash a Generation of Geniuses In 2009, scientists from the University of Louisville and MIT's Department of Brain and Cognitive Sciences conducted a study of 48 children between the ages of 3 and 6. The kids were presented with a toy that could squeak, play notes, and reflect images, among other things. For one set of children, a researcher demonstrated a single attribute and then let them play with the toy. Another set of students was given no information about the toy. This group played longer and discovered an average of six attributes of the toy; the group that was told what to do discovered only about four. A similar study at UC Berkeley demonstrated that kids given no instruction were much more likely to come up with novel solutions to a problem.

An Antidote to the Age of Anxiety: Alan Watts on Happiness and How to Live with Presence by Maria Popova Wisdom on overcoming the greatest human frustration from the pioneer of Eastern philosophy in the West. “How we spend our days is, of course, how we spend our lives,” Annie Dillard wrote in her timeless reflection on presence over productivity — a timely antidote to the central anxiety of our productivity-obsessed age. Indeed, my own New Year’s resolution has been to stop measuring my days by degree of productivity and start experiencing them by degree of presence. But what, exactly, makes that possible?

Spinal cord The spinal cord is a long, thin, tubular structure made up of nervous tissue, that extends from the medulla oblongata in the brainstem to the lumbar region of the vertebral column. It encloses the central canal of the spinal cord that contains cerebrospinal fluid. The brain and spinal cord together make up the central nervous system (CNS). In humans, the spinal cord begins at the occipital bone where it passes through the foramen magnum, and meets and enters the spinal canal at the beginning of the cervical vertebrae. The spinal cord extends down to between the first and second lumbar vertebrae where it ends.

Epistemology - A philosophical concept concerning how you know what you know and the methods you choose to use in order to test the validity of 'knowledge'. Epistemologists 'are occupied with the grounds and the limits, in brief, the character, of "knowledge"' (Mills, 1959, p. 58/). Found in: Davies, M. (2007) Doing a Successful Research Project: Using Qualitative or Quantitative Methods. Basingstoke, Hampshire, England, United Kingdom: Palgrave Macmillan. ISBN: 9781403993793. by raviii Jul 31

Epistemology - A way of understanding and explaining how we know what we know or believe in. Found in: Glossary of Key Terms: by raviii Jul 31

Epistemology: the study of the grounds upon which we believe something to be true. Found in: 2012 - (Oliver) Succeeding With Your Literature Review by raviii Apr 10