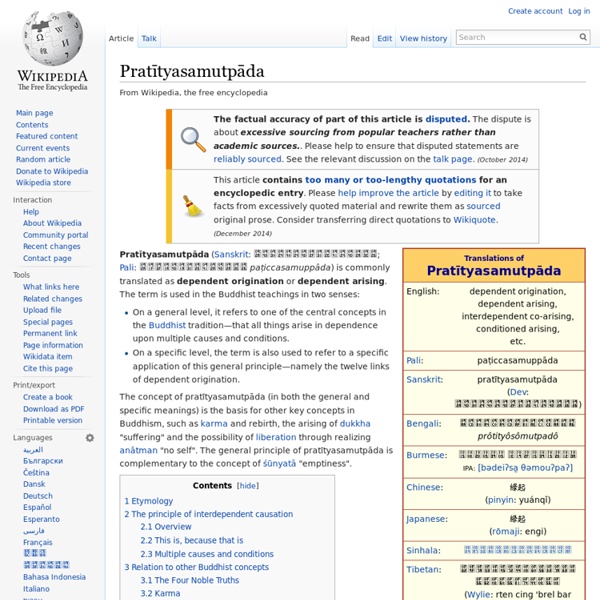 Pratītyasamutpāda (Sanskrit: प्रतीत्यसमुत्पाद; Pali: पटिच्चसमुप्पाद paṭiccasamuppāda) is commonly translated as dependent origination or dependent arising. The term is used in the Buddhist teachings in two senses: On a general level, it refers to one of the central concepts in the Buddhist tradition—that all things arise in dependence upon multiple causes and conditions.On a specific level, the term is also used to refer to a specific application of this general principle—namely the twelve links of dependent origination. Etymology[edit] Pratityasamutpada (Sanskrit: प्रतीत्यसमुत्पाद) consists of two terms: pratitya: "having depended"samutpada: "arising", "rise, production, origin"[web 1] The term has been translated into English variously as dependent origination, dependent arising,[citation needed] interdependent co-arising,[citation needed] conditioned arising,[citation needed] and conditioned genesis. The Dalai Lama explains: In Sanskrit the word for dependent-arising is pratityasamutpada.

Related:  Just So: An Odyssey into the Cosmic Web of Connection, Play, and True Pleasure • Meditation

Impermanence Impermanence is a philosophical concept that appears in a variety of religions and philosophies. Indian religion[edit] The Pali word for impermanence, anicca, is a compound word consisting of "a" meaning non-, and "nicca" meaning "constant, continuous, permanent".[1] While 'nicca' is the concept of continuity and permanence, 'anicca' refers to its exact opposite; the absence of permanence and continuity. The term appears in the Rigveda, and is synonymous with the Sanskrit term anitya (a + nitya).[1][2] The term appears extensively in the Pali Canon.[1] Buddhism[edit]

Skandha Skandhas (Sanskrit) or khandhas (Pāḷi) means "heaps, aggregates, collections, groupings".[1] In Buddhism, it refers to the five aggregates of clinging (Pancha-upadanakkhanda), the five bodily and mental factors that take part in the rise of craving and clinging. They are also explained as the five factors that constitute and explain a sentient being’s person and personality,[2][4] but this is a later interpretation in response to sarvastivadin essentialism. The five aggregates or heaps are: form (or matter or body) (rupa), sensations (or feelings, received from form) (vedana), perceptions (samjna), mental activity or formations (sankhara), and consciousness (vijnana).[5][6][7]

Buddhānusmṛti Theravada[edit] One thing — when developed & pursued — leads solely to disenchantment, to dispassion, to cessation, to stilling, to direct knowledge, to self-awakening, to Unbinding. Which one thing? Recollection of the Buddha. Noble Eightfold Path An early summary of the path of Buddhist practices leading to liberation from samsara The eight spoke Dharma wheel symbolizes the Noble Eightfold Path In Buddhist symbolism, the Noble Eightfold Path is often represented by means of the dharma wheel (dharmachakra), in which its eight spokes represent the eight elements of the path. Etymology and nomenclature[edit]

Patikulamanasikara Type of traditional Buddhist meditation Translation[edit] Paṭikkūla (Pāli) literally means "against" (paṭi) "the slope" or "embankment" (kūla) and has been translated adjectivally as "averse, objectionable, contrary, disagreeable" and, in its nounal form, as "loathsomeness, impurity".[3] Manasikāra (Pāli), derived from manasi (locative of mana thus, loosely, "in mind" or "in thought") and karoti ("to make" or "to bring into") and has been translated as "attention" or "pondering" or "fixed thought".[4]

Five Tathagatas Cloth with painting of the Buddhas In Vajrayana Buddhism, the Five Tathāgatas (pañcatathāgata) or Five Wisdom Tathāgatas (Chinese: 五智如来; pinyin: Wǔzhì Rúlái), the Five Great Buddhas and the Five Jinas (Sanskrit for "conqueror" or "victor"), are emanations and representations of the five qualities of the Adi-Buddha or "first Buddha" Vairocana or Vajradhara, which is associated with the Dharmakāya.[1] They are also sometimes called the "dhyani-buddhas", a term first recorded in English by Brian Houghton Hodgson, a British Resident in Nepal,[2] in the early 19th century, and is unattested in any surviving traditional primary sources.[3] These five Buddhas are a common subject of Vajrayana mandalas. These five Buddhas feature prominently in various Buddhist Tantras and are the primary object of realization and meditation in Shingon Buddhism, a school of Vajarayana Buddhism founded in Japan by Kūkai. Origin[edit] Qualities[edit]

Anapanasati Ānāpānasati is now common to Tibetan, Zen, Tiantai and Theravada Buddhism as well as Western-based mindfulness programs. Simply defined, Anapanasati is to feel the sensations caused by the movements of the breath in the body as is practiced in the context of mindfulness meditation. Origins in Buddhism[edit] Anapanasati is a core meditation practice in Theravada, Tiantai and Chan traditions of Buddhism as well as a part of many mindfulness programs. In both ancient and modern times, anapanasati by itself is likely the most widely used Buddhist method for contemplating bodily phenomena.

Mandala Spiritual and ritual symbol in Hinduism, Jainism and Buddhism Thangka painting of Manjuvajra mandala A mandala (Sanskrit: मण्डल, romanized: maṇḍala, lit. 'circle', [ˈmɐɳɖɐlɐ]) is a geometric configuration of symbols. Zen Zen is a school of Mahayana Buddhism[note 1] that developed in China during the Tang dynasty as Chán. From China, Zen spread south to Vietnam, northeast to Korea and east to Japan. Zen emphasizes rigorous meditation-practice, insight into Buddha-nature, and the personal expression of this insight in daily life, especially for the benefit of others. As such, it deemphasizes mere knowledge of sutras and doctrine and favors direct understanding through zazen and interaction with an accomplished teacher. The teachings of Zen include various sources of Mahāyāna thought, especially Yogācāra, the Tathāgatagarbha Sutras and Huayan, with their emphasis on Buddha-nature, totality, and the Bodhisattva-ideal. The Prajñāpāramitā literature and, to a lesser extent, Madhyamaka have also been influential in the shaping of the "paradoxical language" of the Zen-tradition.

Mahavairochana Mahavairochana 大日如来 (Skt; Jpn Dainichi-nyorai) The introduction of Buddhism to Japan was one of the most important events in Japanese history and had a lasting effect on the development of its thought, art, and culture. According to Japanese sources, Buddhism was introduced from the Korean kingdom of Paekche in either 538 or 552 as part of a series of diplomatic exchanges that also led to a broader awareness of the beliefs and material culture of China and Korea. Vairochana, whose name means "infinite light," is worshipped as the primary Buddha in the Shingon sect of Esoteric Buddhism.

Vairocana/Mahāvairocana - Buddhism Introduction As one of the aspects and later designation of Vairocana (var. Virocana/Verocana), or the Luminous One, Mahāvairocana is a very important figure in the Buddhism of East Asia, Tibet, Nepal, and Java.