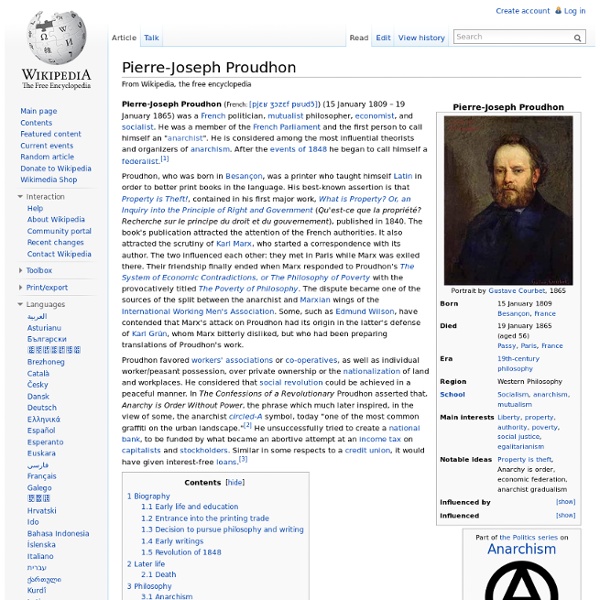 Proudhon, who was born in Besançon, was a printer who taught himself Latin in order to better print books in the language. His best-known assertion is that Property is Theft!, contained in his first major work, What is Property? Or, an Inquiry into the Principle of Right and Government (Qu'est-ce que la propriété? Recherche sur le principe du droit et du gouvernement), published in 1840. The book's publication attracted the attention of the French authorities. Proudhon favored workers' associations or co-operatives, as well as individual worker/peasant possession, over private ownership or the nationalization of land and workplaces. Biography Early life and education Proudhon was born in Besançon, France on February 15, 1809, at 37 Rue du Petit Battant in the suburb of Battant.[6] His father, Claude-François Proudhon who worked as a brewer and a cooper,[7] was originally from the village of Chasnans, near the border with Switzerland. Entrance into the printing trade Early writings Death

Mutualism (economic theory) Mutualism is an economic theory and anarchist school of thought that advocates a society where each person might possess a means of production, either individually or collectively, with trade representing equivalent amounts of labor in the free market.[1] Integral to the scheme was the establishment of a mutual-credit bank that would lend to producers at a minimal interest rate, just high enough to cover administration.[2] Mutualism is based on a labor theory of value that holds that when labor or its product is sold, in exchange, it ought to receive goods or services embodying "the amount of labor necessary to produce an article of exactly similar and equal utility".[3] Mutualism originated from the writings of philosopher Pierre-Joseph Proudhon. Mutualists have distinguished mutualism from state socialism, and do not advocate state control over the means of production. Mutualism, as a term, has seen a variety of related uses. For historian of the First International G.

Revolutions of 1848 in the Italian states The 1848 revolutions in the Italian states were organized revolts in the states of the Italian peninsula and Sicily, led by intellectuals and agitators who desired a liberal government. As Italian nationalists they sought to eliminate reactionary Austrian control. During this time period, Italy was not a unified country, and was divided into many states, which, in Northern Italy, were ruled by the Austrian Empire. A desire to be free from foreign rule, and the conservative leadership of the Austrians, led the Italian people to stage revolution in order to drive out the Austrians.

Jean-Paul Sartre His work has also influenced sociology, critical theory, post-colonial theory, and literary studies, and continues to influence these disciplines. Sartre has also been noted for his open relationship with the prominent feminist theorist Simone de Beauvoir. He was awarded the 1964 Nobel Prize in Literature but refused it, saying that he always declined official honors and that "a writer should not allow himself to be turned into an institution".[2] Biography[edit] Early life[edit] Jean-Paul Sartre was born in Paris as the only child of Jean-Baptiste Sartre, an officer of the French Navy, and Anne-Marie Schweitzer.[3] His mother was of Alsatian origin and the first cousin of Nobel Prize laureate Albert Schweitzer.

Sicilian revolution of independence of 1848 The revolution[edit] Background[edit] The revolution in Palermo (12 January 1848). The former kingdoms of Naples and Sicily were formally reunited following the 1815 Congress of Vienna to become the Bourbon kingdom of the Two Sicilies. Both kingdoms had previously comprised the single Kingdom of Sicily (created by the Normans in the 11th century) during the 12th and 13th centuries, and were split in two following the revolt of the Sicilian Vespers in 1282. The seeds of the revolution of 1848 were sown prior to the Congress of Vienna, in 1812. Phenomenology (philosophy) Phenomenology (from Greek: phainómenon "that which appears" and lógos "study") is the philosophical study of the structures of experience and consciousness. As a philosophical movement it was founded in the early years of the 20th century by Edmund Husserl and was later expanded upon by a circle of his followers at the universities of Göttingen and Munich in Germany. It then spread to France, the United States, and elsewhere, often in contexts far removed from Husserl's early work.[1]

Blanquism Louis Auguste Blanqui In left-wing discourse, Blanquism refers to a conception of revolution generally attributed to Louis Auguste Blanqui which holds that socialist revolution should be carried out by a relatively small group of highly organised and secretive conspirators.[1] Having seized power, the revolutionaries would then use the power of the state to introduce socialism. It is considered a particular sort of 'putschism' – that is, the view that political revolution should take the form of a putsch or coup d'état.[2] Blanquism is distinguished from other socialist currents (especially Marxist ones) in various ways; on the one hand, contrary to Marx, Blanqui did not believe in the predominant role of the working class, nor did he believe in popular movements.

Revolutions of 1848 in the Habsburg areas From March 1848 through November 1849, the Habsburg Austrian Empire was threatened by revolutionary movements. Much of the revolutionary activity was of a nationalist character: the empire, ruled from Vienna, included Austrian Germans, Hungarians, Slovenes, Poles, Czechs, Slovaks, Ruthenians (Ukrainians), Romanians, Croats, Italians, and Serbs, all of whom attempted in the course of the revolution to either achieve autonomy, independence, or even hegemony over other nationalities. The nationalist picture was further complicated by the simultaneous events in the German states, which moved toward greater German national unity. Besides these nationalisms, liberal and even socialist currents resisted the empire's longstanding conservatism.

René Girard René Noël Théophile Girard (;[2] French: [ʒiʁaʁ]; 25 December 1923 – 4 November 2015) was a French historian, literary critic, and philosopher of social science whose work belongs to the tradition of anthropological philosophy. Girard was the author of nearly thirty books, with his writings spanning many academic domains. Although the reception of his work is different in each of these areas, there is a growing body of secondary literature on his work and his influence on disciplines such as literary criticism, critical theory, anthropology, theology, psychology, mythology, sociology, economics, cultural studies, and philosophy. Girard's main contribution to philosophy, and in turn to other disciplines, was in the field of epistemological and ethical systems of desire.