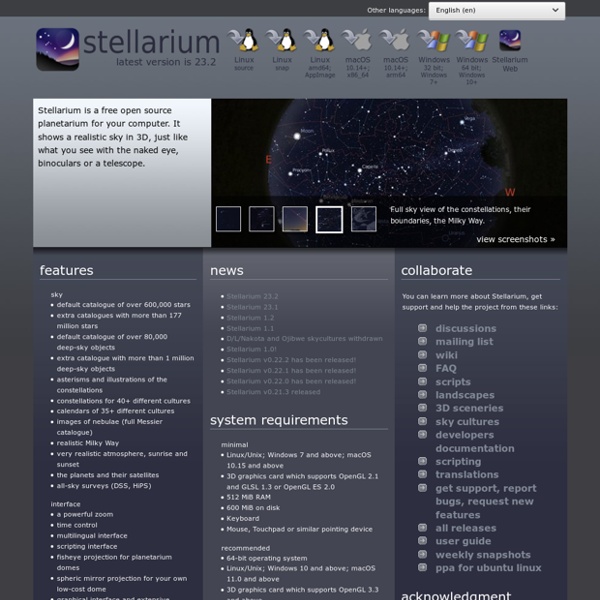 CopyQ CopyQ is advanced clipboard manager with editing and scripting features. Overview CopyQ monitors system clipboard and saves its content in customized tabs. Saved clipboard can be later copied and pasted directly into any application. Screenshots Why the multiverse is all about you - The Philosopher's Zone In general, quantum physicists don't have much truck with big conceptual schemes. But one of their own has broken rank. Christopher Fuchs tells Joe Gelonesi how a particular school of 20th century philosophy helps him make quantum leaps. Quantum mechanics can be tough to get your head round. It's incredibly technical, theoretical, and in some part you could say philosophical. 46 Fabulous Photos of Endeavour’s Last Ever Spacewalk May 27th, 2011: the last spacewalk for NASA’s Endeavour astronauts. Here, a fish-eye lens attached to an electronic still camera was used to capture this image of NASA astronaut Michael Fincke (top center) during the mission’s fourth session of extravehicular activity (EVA) as construction and maintenance continued on the International Space Station. Photo #1 by NASA A bright sun, a portion of the International Space Station and Earth’s horizon are featured in this image photographed by a spacewalker during the STS-134 mission.

Strange massive tear in the solar surface- Earth quivers So, if this mystery object which is much larger than a comet – supposedly several times the size of the earth – were to come into range of the sun to be incinerated, would it not produce pretty much the larger ‘holes’ that we see here? Could NONE of it really be left? I notice that all the talk of Planet X has ceased. NASA ‘they say’ mentioned this object, and then disavowed having mentioned it. Maybe there is a news blackout? (That sort of claim appears often on shrill internet sites – claims like “Oh see this video, it was suppressed on the Discover channel because of politics,” when I saw that video on the Discover channel around 2003.)

Wink - [Homepage] Here is a sample Flash tutorial created by Wink. Click the green arrow button to start viewing it. --------> This is a good example of how you can create tutorials in Wink, by capturing screenshots, mouse movements and specifying your own explanations with them. ExifTool - A Viewer for Camera Exif data Digital camera image files contain Exif data (Exif is Exchangeable image file format). This data describes the format of the image data. The camera is the source, and the value to camera users is that the camera settings are also recorded in the Exif data. Exif data can be in JPEG, TIFF, and raw image files, and also sound data files. Image formats PNG, GIF and JPEG2000 do not include Exif data. The Edge Of The Universe Is Closer Than Scientists Previously Thought The visible universe just shrunk by 320 million light-years in all directions, updating a famous calculation that physicists first made 13 years ago. If you're trying to calculate the size of the cosmos, the speed of light — the fastest anything can go — is a tempting place to begin and end. You'd reason that since the Big Bang happened some 13.8 billion years ago, there's a 13.8-billion-light-year radius marking the edge of what mere mortals could see. Not so.

3D Space Scene HD Wallpapers DMCAPrivacy policy All submitted content remains copyrighted to its original copyright holder. Images are for personal, non commercial use. Scientific shifts go beyond the zodiac By Alan Boyle, Science Editor, NBC News It seems that the world was shocked to learn this week that astrology no longer reflects astronomical realities. But such shifts are merely part of the routine in a changing universe. They don't always come to our attention, but they can make more of a difference in your daily life than your horoscope. Parke Kunkle, an astronomer who teaches at Minneapolis Community and Technical College, set off an Internet-wide viral buzz when the Star-Tribune published his observation that the constellations don't match the traditional astrological signs.

Free Mind From FreeMind The latest stable release of FreeMind is 1.0.0. Downloading and installation instructions are given below. Installing FreeMind Edge - Navigateur Microsoft After installation, these terms are also viewable in Microsoft Edge at Source code for portions of Microsoft Edge is available free of charge from under the third party open source license terms provided at and in Microsoft Edge at after installation. Or to obtain this source code you may send a check or money order for US $5.00, including the Edge version number, to: Source Code Compliance Team Microsoft Corporation One Microsoft Way Redmond, WA 98052 USA These license terms are an agreement between you and Microsoft Corporation (or one of its affiliates).