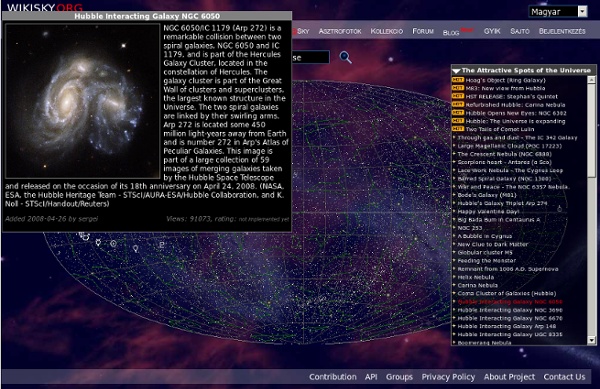 Ancient Astrology and Divination on the Web Welcome to Ancient Astrology and Divination on the Web . This an organized, annotated set of more than 215 links to reliable information about ancient (primarily Greek and Roman) astrology and divination. It is designed to provide some alternative to web searches that turn up dozens of pages by astrologers, tarot readers, and palmists--most seeking your money and all "believers." Although moderns practitioners can occasionally provide useful information, they tend to misrepresent ancient evidence in favor of false continuity and simplicity. I should say at the outset that I am not a believer in astrology or any other form of divination. On this site you fill find pages on Ancient Astrology , on Dream Interpretation (Oneiromancy), general studies of ancient divinatory thinking and practice. I recently cleaned out all the dead links. I hope you find some of these resources useful. Timothy Spalding

Two New Alien Planets Discovered in Andromeda --"Resets the Bar for Weird" Astronomers are beginning to suspect that something unusual happens during the evolution of such solar systems that drives massive planets into kinds of close encounters. The presence of a stellar sibling orbiting both of the newly discovered solar systems may be a “smoking gun” clue that past interactions between the planets and these distant siblings is an important part of that process. One planet is located in the constellation Andromeda. The other planet, KELT-2Ab, is located in the constellation Auriga, and is typical of many previously discovered extrasolar planets in that it much resembles our own Jupiter. “Normally, we would need a space telescope to do all that, but in this case the host star is so bright that we can make many of these measurements from the ground,” Beatty said.* KELT is short for “Kilodegree Extremely Little Telescope.” Other telescopes were designed to look at very faint stars in tiny sections of the sky, and at very high resolution, Beatty explained.

After a 14-Year Search --Elusive Ancient Galaxy Found In the Hubble Deep Field Region of the Universe (above), an international team of astronomers managed for the first time to determine the distance of the galaxy HDF850.1, well-known among astronomers as being one of the most productive star-forming galaxies in the observable universe. The galaxy is at a distance of 12.5 billion light years when the universe was less than 10 percent of its current age. For the past 14 years, HDF850.1 has remained strangely elusive. Its location in space, specifically its distance from Earth – the subject of many studies – ultimately remained unknown. How was that possible? "A vast cloud of dust keeps HDF850.1 hidden from telescopes searching the universe in the visible light range, so even the Hubble Space Telescope can't see it," Robertson said. "Any clue we can get about how those early galaxies formed helps us better understand this process," Robertson said. The galaxy HDF850.1 was discovered in 1998. "Stars form in dense clouds of gas and dust.

CelestineVision.com The Zodiac, Cherubim & The Sphinx - Zodiac astrology mythology, Egypt sphinx Mars sphinx face Egypt pyramid Mars pyramids, angels, aliens, ufos, sphinx cherubim Ezekiel 41:18 And it (the paneling of the holy place of the temple) was made with cherubs ...and two faces were to a cherub, the face of a man, toward the palm tree from here, and a young lion's face toward the palm tree from there. It was made to all the house round and round...on the wall of the temple. Myth and God's Message in the Heavens The pictures found today in the zodiac were not developed by the Greeks, but were in place perhaps as early as 4000 B.C. predating even the civilizations of Sumeria . Sphinx were often placed at entrances to palaces or temples of antiquity. The combination of all four creatures in one constitutes what is described in Ezekiel and elsewhere in the Bible as a type of angel. printer friendly version The infamous account of Ezekiel 's wheels, often misinterpreted as a primitive description of a UFO encounter, is actually a vision of the hybrid living creatures who populate the celestial narrative. One day Apollo sent Orion to the sea to catch some fish.

NewsFlash: Rumors Swirling that CERN will Confirm Existence of Higgs Boson Scientists at CERN might be on the verge confirming the existence of what they call the "Higgs boson", according to rumors circulating this week. Higgs, they believe, is a particle, or set of particles, that might give others mass. According to Columbia University mathematician, Peter Woit, "CERN will soon have to decide how to spin this: will they announce discovery of the Higgs, or will they wait for some overwhelmingly convincing standard to be met, such as 5 sigma in at least one channel of one experiment? The theory, developed by British physicist Peter Higgs in the 1960s. hypothesizes that a lattice, referred to as the Higgs field, fills the universe. The question of mass has been a puzzling one, and has left the Higgs boson as the single missing piece of the Standard Model yet to be spotted. The search has been on for over ten years, both at CERN's Large Electron Positron Collider (LEP) in Geneva and at Fermilab in Illinois. The Daily Galaxy via:

Bridget of Sweden Bridget of Sweden (1303 – 23 July 1373; also Birgitta of Vadstena, Saint Birgitta (Swedish: den heliga Birgitta or Birgitta Birgersdotter), was a mystic and saint, and founder of the Bridgettines nuns and monks after the death of her husband of twenty years. She was also the mother of Catherine of Vadstena. She is one of the six patron saints of Europe, together with Benedict of Nursia, Saints Cyril and Methodius, Catherine of Siena and Edith Stein. Life[edit] The most celebrated saint of Sweden was the daughter of the knight Birger Persson[1] of the family of Finsta, governor and lawspeaker of Uppland, and one of the richest landowners of the country, and his wife, a member of the so-called Lawspeaker branch of the Folkunga family. In 1316, at the age of 14[1] she married Ulf Gudmarsson of the family of Ulvåsa, Lord of Närke, to whom she bore eight children, four daughters and four sons. In 1344, shortly after their return, Ulf died at the Cistercian Alvastra Abbey in Östergötland.