US seeks USD 64 mln for Nepal reconstruction efforts. Labourers perform construction works on the top of Taleju Temple, which was damaged by the last year earthquakes, in Patan, Lalitpur on Friday, January 29, 2016. 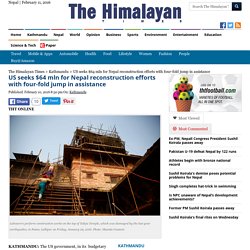 Photo: Skanda Gautam Kathmandu Narahari Acharya’s condition stable The health condition of Nepali Congress leader Nar... Entertainment Lennon’s hair up for sale A lock of singer John Lennon's hair is expected to... Opinion The ‘Angry Quarter’: Challenge is to stay Tribalism has strong appeal in periods of rapid, t... Lifestyle US WWII vet reunites with wartime girlfriend in Australia A 93-year-old World War II veteran from the United... KATHMANDU: The US government, in its budgetary proposal, has sought a four-fold jump in financial assistance to Nepal for the post-earthquake reconstruction efforts. 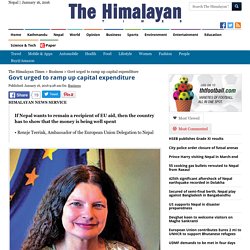 Education Teens not changing English language: Study Are teenagers changing the English language becaus... Travel Symphony of sensations In October I was set for a 12-day trek to do the A... Entertainment Singer Celine Dion’s brother near death Canadian singer Celine Dion, whose husband died ea... Kathmandu, January 15 Rensje Teerink, ambassador of the European Union (EU) Delegation to Nepal, has called on the government to ramp up capital spending if it wants to continue receiving aid from the EU.

The John Sloan Dickey Center. February 18th Exhibit and Public ConversationHood Museum of Art 5:00pm, Photographers James Nachtwey and Kevin Bubriski will exhibit some of their photos and participate in a public conversation in an event hosted by the Hood Museum of Art. 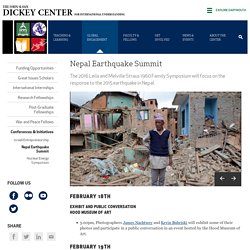 Jan 1, 2016- The house of Shree Krishna Chepang is barely standing. 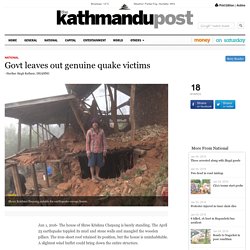 The April 25 earthquake toppled its mud and stone walls and mangled the wooden pillars. The iron-sheet roof retained its position, but the house is uninhabitable. A slightest wind buffet could bring down the entire structure. But when officials visited Chepang’s house at Pida VDC-6 in Dhading district for inspection, they decided the house was partially affected. Healing together. HELPING TOGETHER: IRW officer Bilal Agmad Zargar (left) and LWF officer Chenyen Nekor (right), together with a volunteer hand over construction materials to Nirmala BK in Kalikasthan of Rasuwa. 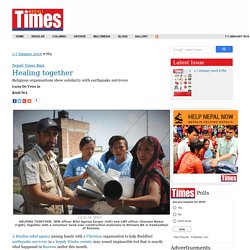 A Muslim relief agency joining hands with a Christian organisation to help Buddhist earthquake survivors in a largely Hindu country may sound implausible but that is exactly what happened in Rasuwa earlier this month. In August, the Lutheran World Federation (LWF) and Islamic Relief Worldwide (IRW) signed an agreement to cooperate in humanitarian relief efforts, a first collaboration of its kind in Nepal. Since then the two organisations have supported quake survivors in five VDCs of Rasuwa district. Who Is Really Putting Nepal Back Together? More than seven months after a devastating earthquake in Nepal killed almost 9,000 people and left millions in need of food, shelter, and basic medical care, most of the $4 billion committed by international donors has not reached its intended recipients. 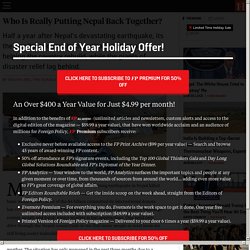 Children cannot go to school, buildings remain unsafe and harsh winter weather is fast approaching. One need only drive through the Nepali countryside to see that many people in rural areas are still living under makeshift shelters using tarpaulin and sticks. Toilets, Not Tarps: What People Really Need After a Natural Disaster. Emergency earthquake relief is vital but short-lived. 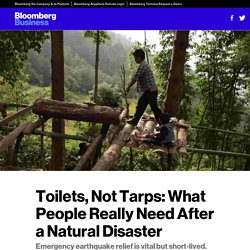 The Dzi Foundation brings Nepalis aid that lasts. By Abe Streep | December 3, 2015. No relief for Nepal quake victims as relief fund in limbo. KATHMANDU: Hundreds of thousands of quake victims in Nepal are unable to start rebuilding their homes as winter approaches because a $4.1 billion reconstruction fund cannot be spent until lawmakers pass a long-delayed bill -- to the frustration of international donors. 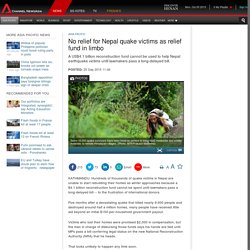 Five months after a devastating quake that killed nearly 9,000 people and destroyed around half a million homes, many people have received little aid beyond an initial $150-per-household government payout. Victims who lost their homes were promised $2,000 in compensation, but the man in charge of disbursing those funds says his hands are tied until MPs pass a bill conferring legal status on the new National Reconstruction Authority (NRA) that he heads. That looks unlikely to happen any time soon.

Nepal earthquake funds unclaimed and unspent as winter looms for survivors. Nepal’s government is yet to spend any of the $4.1bn (£2.7bn) promised by foreign governments and donor agencies for reconstruction after the earthquakes in April and May, which killed almost 9,000 people and left millions in need of aid. 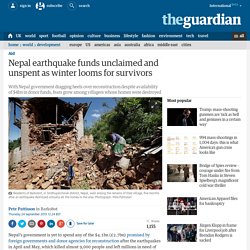 The funding, which was pledged at a donor conference in Kathmandu on 25 June, remains unclaimed and unspent, despite assurances at the time from the country’s prime minister, Sushil Koirala, that the Nepalese government would “leave no stone unturned in ensuring that the support reaches the intended beneficiaries”. “You can imagine the frustration,” said Govinda Raj Pokharel, the CEO-designate of the body slated to oversee the disbursement of the donor’s funds, the National Reconstruction Authority (NRA).

“It’s natural donors are disappointed.” The NRA has not yet even been formed, after the bill to establish it lapsed in parliament. That will come as little comfort to villagers in Sindhupalchowk, the district worst hit by the earthquake. Nepal, ADB sign MoU on Rs 20 bln reconstruction aid. A woman salvaging goods from her damaged house in ane earthquake-hit village. 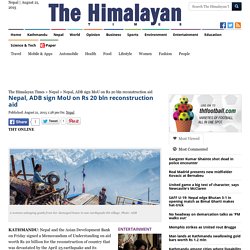 Photo: ADB Entertainment Two more women accuse Bill Cosby of assault in 1970s Two more women came forward on Thursday to accuse ... Women Dal-pack Now who does not want to get a natural glow? Many ... WFP may halt helicopter service. United Nations Humanitarian Air Service (UNHAS) has said that it is likely to terminate helicopter service in Nepal earlier than planned citing funding crisis. Nepal has been recently devastated by the earthquakes and helicopter service is vital to humanitarian relief efforts in the disaster-hit areas. UNHAS has said that interruption of helicopter service will leave at least 146,000 earthquake survivors in remote villages of Nepal without the support they require to survive through the monsoon and beyond, including emergency shelter and food and livelihood support.

“Airlift support is crucial for the ongoing relief operation,” said Jamie McGoldrick, UN Humanitarian Coordinator in Nepal. “Without it, humanitarian partners will not be able to continue providing vital assistance to communities in far-flung areas, most of which were severely affected by the earthquakes.” UNHAS says that it needs US$ 18 million to continue with the ongoing relief operation until October 2015. Jump-starting the economy. Sarthak Mani Sharma At a meeting this week organised by the Asian Development Bank (ADB) to review the effectiveness of its loans and grants to Nepal, the Manila-based institution’s Director General Hun Kim couldn’t hide his frustration about delays in project implementation. That concern is now also spreading to the speed and effectiveness of proposed assistance for earthquake reconstruction. “We will suspend, even cancel loans now,” Hun bluntly told the gathering.

For proof of just how slow things are to get off the ground in Nepal, one needn’t look beyond the Melamchi Water Supply Project. Nepal Can Recover, But Only If We Change What Is Happening  I lived in a tent in Nepal as a refugee from Bhutan in the 1990s. And so it broke my heart this month, when I traveled to Nepal in the wake of the recent earthquake and witnessed Nepalese families living in a sea of plastic tents, much like the ones my family and I lived in after the government of Bhutan expelled my family and my community and Nepal took us in. I was there to coordinate emergency response in the wake of the devastation that has crippled Nepal, focusing especially on the poorest and most vulnerable people, including refugees whose plight reminded me of my past. Despite my familiarity, I was horrified by the devastation: a 12-year-old whose father was crushed by a house; a huge pile of rubble that buried alive the hundreds of goats that a village depended on for food; a remote village where a tangle of splintered wood was all that remained of 53 of the 55 homes.

The world has opened its hands to Nepal, contributing millions of dollars. Nepal tells UN to destroy low quality food meant for quake survivors. Men unload emergency food supplies after the April 25 earthquake in Kerauja, Nepal, May 8, 2015. REUTERS/Olivia Harris By Gopal Sharma KATHMANDU, June 29 (Thomson Reuters Foundation) - The United Nations must destroy hundreds of tonnes of substandard food it imported for distribution to survivors of the recent earthquakes in Nepal, a senior Nepali government official said on Monday. Two quakes, on April 25 and May 12, killed 8,844 people, injured more than 22,000 and destroyed 500,000 homes forcing tens of thousands into temporary shelters and in need of food and medical care. Nepal earthquake: No IMF aid under catastrophe containment fund. Nepal will not receive debt relief from a special trust fund created by the International Monetary Fund (IMF) to help disaster-hit economies, the financial agency has said.

IMF spokesperson Gerry Rice said in a press briefing that the earthquake did not cause enough economic damage for Nepal to be eligible for funding from the Catastrophe Containment and Relief Trust. As per IMF rules, to qualify for the relief, the disaster must impact at least one-third of the country's population and either destroy 25% of the nation's productive capacity or cause damage equal to the size of the country's economy. Nepal met the first condition but the earthquake did not cause enough economic damage to be eligible for the relief, according to Rice. However, he said the IMF would provide up to $124m (£78.9m, €110.7m) zero-interest loan under its Rapid Credit Facility (RCF). "This fund was created for situations just like this and debt relief in Nepal could make a significant difference.

" Subcontracting kindness. Nepal’s Political Faultlines. Travel Blog by Kunda Dixit. How is assistance being delivered in Nepal? Will donor conference address customs bottlenecks delaying aid efforts in Nepal? Aid. What Happened to the Aid? Nepal Earthquake Response Echoes Haiti. I was in Kathmandu last month when the second earthquake struck. It was a 7.3 quake and the most powerful I’ve ever experienced. It shocked me. From 2010 to 2012, I lived in Port-au-Prince, Haiti and reported on the aftermath of the earthquake there. I wasn’t in that country when Haiti’s earthquake struck, but I shared in the trauma of grief. Like many journalists and witnesses to Haiti’s recovery, the experience left me angry and perplexed. Haiti’s experience will repeat Last week, with a saddened heart, I read ProPublica and NPR’s story about the Red Cross in Haiti. For the past five years, I’ve been traveling to areas struck by earthquakes, hurricanes and other disasters, all around the world, listening and seeing if the world has lessons for Haiti—if there is an answer we missed or a solution nearly in sight.

My Republica - Rotten rice from WFP found in Gorkha again. GORKHA, June 18: Yet another instance of rotten rice being distributed by the World Food Program (WFP) to the earthquake-affected has occured at Laprak in Gorkha districtat a time when criticism against the UN agency for the poor quality of the rice distributed has arisen from every quarter. Thinking in an Emergency Or, Free Tents as a Cautionary Tale. Less than 48pc relief, rescue fund spent.

Rock and a hard place. Food to the Mountaintop: Feeding Disaster Victims in Nepal  When it rains, it pours. "My legs started shaking uncontrollably, and suddenly I fell." The challenges facing the Nepal earthquake disaster response. Unplanned aid distribution a problem, not relief - southasia.com.au. The Kathmandu Post. Nepal’s Political Faultlines. Shelter from the storm. Nepalese struggle to get back on their feet one month after earthquake - video. Windstorm, rain batters Capital, add to quake victims woes. International Committee of the Red Cross. The identity crisis frustrating Nepal's quake survivors. Where is Nepal aid money going? - BBC News. Relief distribution for families displaced from Haku VDC, Rasuwa « Relief Work for Nepal Quake Survivors. Relief Work for Nepal Quake Survivors. 3 Lessons From Haiti That Will Help Nepal  It’s bad business not to donate to Nepal. The Brief » Blog Archive » Chile takeaways.