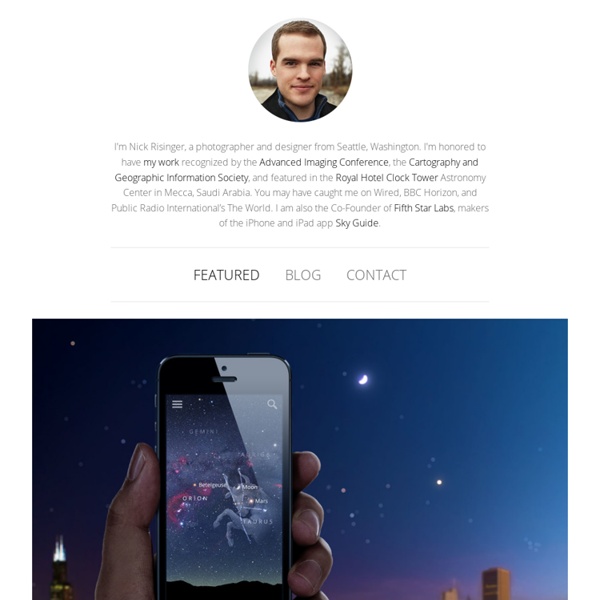 40 Gigapixels - World's Largest indoor Photo: Strahov Philosophical Library, Prague - 360º Panorama About this photo This image was created from 3,000 individual photos stitched together into a single image that is 280,000 x 140,000 pixels. That's around 40 gigapixels, or 40,000 megapixels. Photograph the Stars From Wired How-To Wiki Comets are a great starting point for amateur astrophotographers. Photo by aroberts via Flickr. Prehistory Prehistory (meaning "before history", or "before knowledge acquired by investigation", from the Latin word for "before," præ, and historia) is the span of time before recorded history or the invention of writing systems. Prehistory refers to the period of human existence before the availability of those written records with which recorded history begins.[1] More broadly, it can refer to all the time preceding human existence and the invention of writing. The notion of "prehistory" began to surface during the Enlightenment in the work of antiquarians who used the word 'primitive' to describe societies that existed before written records.[2] The first use of the word prehistory in English, however, occurred in the Foreign Quarterly Review in 1836.[3] The occurrence of written materials (and so the beginning of local "historic times") varies generally to cultures classified within either the late Bronze Age or within the Iron Age. Definition[edit]

JSatTrak - Java Satellite Tracker by Shawn Gano By: Shawn Gano JSatTrak is a Satellite tracking program written in Java. It allows you to predict the position of any satellite in real time or in the past or future. It uses advanced SGP4/SDP4 algorithms developed by NASA/NORAD or customizable high precision solvers to propagate satellite orbits. Klimt University of Vienna Ceiling Paintings The Klimt University of Vienna Ceiling Paintings, also known as the Faculty Paintings, were a series of paintings made by Gustav Klimt for the ceiling of the University of Vienna's Great Hall between the years of 1900-1907. In 1894, Klimt was commissioned to paint the ceiling. Upon presenting his paintings, Philosophy, Medicine and Jurisprudence, Klimt came under attack for 'pornography' and 'perverted excess' in the paintings. None of the paintings would go on display in the university. In May 1945 all three paintings were destroyed by retreating SS forces.[1]

Norse mythology An undead völva, a Scandinavian seeress, tells the spear-wielding god Odin of what has been and what will be in Odin and the Völva by Lorenz Frølich (1895) For the practices and social institutions of the Norse pagans, see Norse paganism Norse mythology, or Scandinavian mythology, is the body of mythology of the North Germanic people stemming from Norse paganism and continuing after the Christianization of Scandinavia and into the Scandinavian folklore of the modern period. The northernmost extension of Germanic mythology, Norse mythology consists of tales of various deities, beings, and heroes derived from numerous sources from both before and after the pagan period, including medieval manuscripts, archaeological representations, and folk tradition.

from Psychology: An Introduction Psychology: An Introduction Table of Contents Next page Copyright© 2007-2011Russ Dewey Part One: Group Influences Part Two: Organizations and Movements Human Brain Facts and Answers By Disabled World - 2008-10-19 Questions answers and facts relating to the human brain and the study of the brain organ including the spinal cord. What is the Brain? 10 Psychological Experiments That Went Horribly Wrong Psychology as we know it is a relatively young science, but since its inception it has helped us to gain a greater understanding of ourselves and our interactions with the world. Many psychological experiments have been valid and ethical, allowing researchers to make new treatments and therapies available, and giving other insights into our motivations and actions. Sadly, others have ended up backfiring horribly — ruining lives and shaming the profession.

Freedom Vaults : Guidelines for Saying No to Police Searches One of the main powers that law enforcement officers carry is the power to intimidate citizens into voluntarily giving up their rights. Police are trained to believe in their authority and trained to perform their interactions with private citizens with confidence. It is their job to deal with problems and they learn to manage uncomfortable situations through strength. Most people, when confronted by police get a mild panic reaction, become anxious, and try to do whatever they can to minimize the time spent with the officer. Because of the imbalance of power between citizen and officer, when a law enforcement officer makes a strongly worded request, most people consent without realizing that they are giving up constitutional protections against improper meddling by the State in the private affairs of citizens. A common situation is that of the traffic stop.

List of cognitive biases Cognitive biases are tendencies to think in certain ways that can lead to systematic deviations from a standard of rationality or good judgment, and are often studied in psychology and behavioral economics. There are also controversies over some of these biases as to whether they count as useless or irrational, or whether they result in useful attitudes or behavior. For example, when getting to know others, people tend to ask leading questions which seem biased towards confirming their assumptions about the person. However, this kind of confirmation bias has also been argued to be an example of social skill: a way to establish a connection with the other person.[7] Although this research overwhelmingly involves human subjects, some findings that demonstrate bias have been found in non-human animals as well. For example, hyperbolic discounting has been observed in rats, pigeons, and monkeys.[8]

The story of the Gömböc September 2009 Play this movie to see the Gömböc wriggle. This article is also available as a podcast. How to Trick Your Brain for Happiness This month, we feature videos of a Greater Good presentation by Rick Hanson, the best-selling author and trailblazing psychologist. In this excerpt from his talk, Dr. Hanson explains how we can take advantage of the brain’s natural “plasticity”—it’s ability to change shape over time. gobyg There’s this great line by Ani Tenzin Palmo, an English woman who spent 12 years in a cave in Tibet: “We do not know what a thought is, yet we’re thinking them all the time.” It’s true.

Relativistic Baseball What would happen if you tried to hit a baseball pitched at 90% the speed of light? - Ellen McManis Let’s set aside the question of how we got the baseball moving that fast.

**The Photopic Sky Survey is a 5,000 megapixel photograph of the entire night sky stitched together from 37,440 exposures. by agnesdelmotte May 19