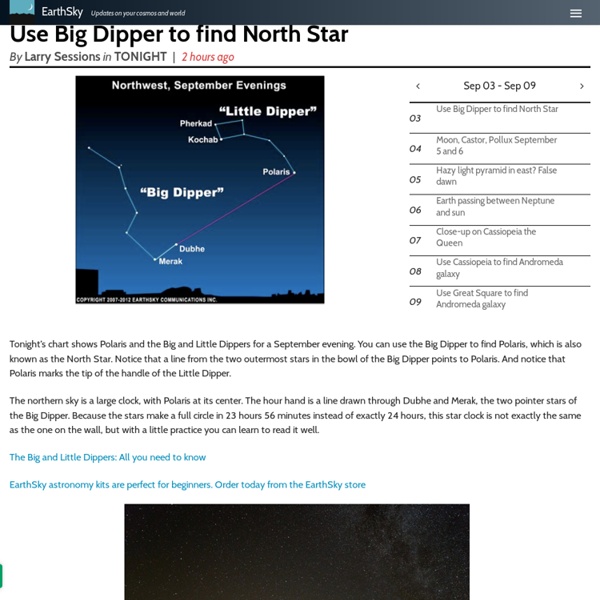 Tonight’s chart shows Polaris and the Big and Little Dippers for a September evening. You can use the Big Dipper to find Polaris, which is also known as the North Star. Notice that a line from the two outermost stars in the bowl of the Big Dipper points to Polaris. And notice that Polaris marks the tip of the handle of the Little Dipper. The northern sky is a large clock, with Polaris at its center. The Big and Little Dippers: All you need to know EarthSky astronomy kits are perfect for beginners. View larger. | Keith Breazeal’s photo of a meteor streaking past the Big Dipper during the 2015 Perseid meteor shower. The Big Dipper swings full circle – 360 degrees – around Polaris in about 23 hours and 56 minutes. If you’re in the northern U.S., Canada or at a similar latitude, the Big Dipper is circumpolar for you – always above the horizon. A month from now at mid-evening, the Big Dipper will be noticeably lower in the northwest.

'Dancing lights' draw thousands to frozen north (CNN) -- Winter travelers trek thousands of miles to the frozen north each year seeking the sky's "dancing lights," which provoke awe, excitement and, some say, sex. CNN iReporter Bruce Barrett shot this rare red aurora in Canada's Whitehorse, Yukon. Scientists call the natural phenomenon aurora borealis: cascading beams of greens, yellows, blues, purples or reds -- which paint a breathtaking backdrop across the wilderness and attract thousands of tourists annually. "Usually it starts slowly as kind of a hazy greenish color -- like a mist -- building up in frequency dancing across the sky ... and to me that's religion," said photographer Dave Brosha of Yellowknife, Northwest Territories, who's seen more than 100 Canadian auroras. To the west in Canada's Yukon province, tour operator Torsten Eder likes to tell a story about a marriage that was forged under the glowing curtains of light. See spectacular photos of auroras » "It puts enormous pressure on us," said Eder. Activities Stay:

All about Earth's Atmosphere | Astronotes Where does space begin? Let’s look up into our planet’s atmosphere, that shell of nitrogen (about 78%), oxygen (about 20%), various other gases (2%) that makes life on Earth possible, to find out. The atmosphere gets thinner as you go further up, in fact 90% of the Earth’s atmosphere by weight is in the bottom 10 miles (16 km). A view of the crescent moon through the top of the Earth's atmosphere. The atmosphere is stratified, that is divided into layers based the bulk properties and behaviours of the air at that altitude. Just to put things into perspective, Mt. A diagram showing the layers of the Earth's atmosphere (Image credit: NASA) Rising through the tropopause we come to the second best –known layer of the atmosphere, the stratosphere. Ozone is a molecule made of three oxygen atoms (the oxygen molecules in stuff we breathe is made of two oxygen atoms; an extra atom makes a huge difference as ozone is horrendously toxic).

Stargazers Lounge Earth has more than one moon, astronomers confirm | The Sideshow There are at least two moons orbiting Earth at any given time Researchers at Cornell University say that what we know as the Moon is in fact not the only one orbiting our planet at any given time. Smaller objects regularly inhabit the Earth's orbit, usually leaving after a few months to continue on their celestial journeys. The discovery is considered a major breakthrough for space research because scientists had been working toward visiting asteroids outside of Earth's orbit for research. While these temporary moons are too small for a shuttle landing, they are prime for research from a relatively close distance. However, it's still to be determined whether the announcement will capture the public's attention like previously revealed New Moons. The new paper titled "The population of natural Earth satellites," from Cornell University's Mikael Granvik, Jeremie Vaubaillon and Robert Jedicke states that these "secret moons" enter and exit the Earth's orbit without notice.

LIVE REAL TIME SATELLITE AND SPACE SHUTTLE TRACKING NASA Telescope Confirms Alien Planet in Habitable Zone This story was updated at 12:15 p.m. ET. MOUNTAIN VIEW, Calif. — NASA's planet-hunting Kepler spacecraft has confirmed the discovery of its first alien world in its host star's habitable zone — that just-right range of distances that could allow liquid water to exist — and found more than 1,000 new explanet candidates, researchers announced today (Dec. 5). The new finds bring the Kepler space telescope's total haul to 2,326 potential planets in its first 16 months of operation.These discoveries, if confirmed, would quadruple the current tally of worlds known to exist beyond our solar system, which recently topped 700. The potentially habitable alien world, a first for Kepler, orbits a star very much like our own sun. "We're getting closer and closer to discovering the so-called 'Goldilocks planet,'" Pete Worden, director of NASA's Ames Research Center in Moffett Field, Calif., said during a press conference today. The newfound planet in the habitable zone is called Kepler-22b.

The Night Sky August 2012 | Jodrell Bank Centre for Astrophysics Highlights of the Month April - Mars at Opposition. Image NASA. Mars, lying above Spica in Virgo, reaches opposition on April 8th when its magnitude will be -1.5 and its angular diameter 15.1 arc seconds. Due to the fact that Mars, and to a lesser extend, the Earth have elliptical orbits, its distance from us at opposition can vary from ~54 to 102 million km. April - it is still worthwhile to view Jupiter. Jupiter imaged by Damian Peach Jupiter is now well past opposition but this is a still a good month to observe this giant of planets. The features seen in the Jovian atmosphere have been changing quite significantly over the last few years - for a while the South Equatorial Belt vanished completely (as seen in Damian's image) but has now returned to its normal wide state. See more of Damian Peach's images: Damian Peaches Website" Features in Jupiter's atmosphere - December 2013. April: Look for the Great Red Spot on Jupiter Observe the Great Red Spot Image: NASA 1st 22:44 23rd 21:01 11th 21:03

Bitesize Astronomy Supernova 1987A: The Three Ring Circus Week of March 6, 2000 Last week's Snack talked about why the star that was to become Supernova 1987a (what astronomers call the precursor) exploded. I didn't talk much about what those outer layers are doing while the core is going through its evolutionary gyrations. Again, my apologies. Once upon a time, say a million years or so ago, there was a star that would later be known as Sanduleak -69 202 (named after the man who catalogued stars in that region, and appended with its rough coordinates). As helium piles up in the core, it gets very hot. Nothing last forever, especially a star. This cycle may repeat itself, but as I said last week, as heavier elements fuse, the cycle repeats faster, and the outer layers may not have time to keep up. When a star is a red supergiant, it doesn't just sit there. When the star becomes a blue supergiant, the wind becomes much less dense, but may get a boost in speed by a factor of ten. That was in 1990.