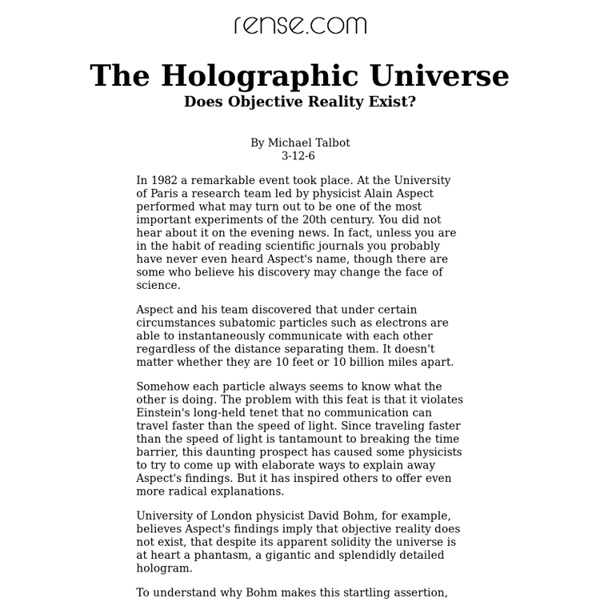 Related:  Astronomy & Space • the theory of everything

Solar Activity and Human Behavior: a link? In response to an earlier post I did about Solar Flares and GPS disruption, someone commented about the affects that solar activity can have on human behavior. Having read more about it since then, it seems that there are some interesting correlations. Here are some links I found on the subject: Sunspots and Human BehaviorThis article was published in the year 2000, just after the last Solar Maximum: The recent Solar Maximum gives us a wonderful opportunity to observe the Sun in action. Borderland Sciences has been investigating the relationship of the Sun and human behaviour for many years, and we are quite confident that we can predict behaviours based on sunspot fluctuations over very short and long durations within the Solar Cycle of 11 years.

Quantum biology: Do weird physics effects abound in nature? 28 January 2013Last updated at 00:05 GMT By Jason Palmer and Alex Mansfield BBC News and BBC Radio Science Unit The multi-billion-dollar fragrance industry might just benefit from the ideas in quantum biology Disappearing in one place and reappearing in another. Being in two places at once. Communicating information seemingly faster than the speed of light. This kind of weird behaviour is commonplace in dark, still laboratories studying the branch of physics called quantum mechanics, but what might it have to do with fresh flowers, migrating birds, and the smell of rotten eggs? 1153 - Christmas Comet Lovejoy Captured at Paranal eso1153 — Photo Release 24 December 2011 The recently discovered Comet Lovejoy has been captured in stunning photos and time-lapse video taken from ESO’s Paranal Observatory in Chile. The comet graced the southern sky after it had unexpectedly survived a close encounter with the Sun. A new time-lapse video sequence was taken by Gabriel Brammer from ESO less than two days ago on 22 December 2011. Gabriel was finishing his shift as support astronomer at the Paranal Observatory when Comet Lovejoy rose over the horizon just before dawn.

Quantum entanglement isn't only spooky, you can't avoid it Quantum entanglement is the key to quantum computing, cryptography, and numerous other real-world applications of quantum mechanics. It is also one of the strangest phenomena in the Universe, overcoming barriers of space and time and knitting the entire cosmos into an integrated whole. Scientists have long thought that entanglement between two particles was a rare and fleeting phenomenon, so delicate that exposure of the particles to their surroundings would quickly destroy this linkage.

Mysteries in slow motion: Videos offer a glimpse into an aerial world we never see By Daily Mail Reporter Updated: 00:27 GMT, 15 January 2012 A series of high-speed animal flight videos are producing an amazing glimpse aerial world most of us have never seen before. Amateurs videographers, with a bit of luck, can use inexpensive digital cameras to turn blurred images into clear illustrations of animal and insect behaviour. What the Hell Are Tachyons? Tachyons cause a lot of problems in movies with starships, but they also cause problems for people in real life. Specifically, they cause problems for students of relativity and string theorists. Learn about the ins and outs of tachyons, and why they need extra dimensions. Whenever the Borg come jumping out of a wormhole in space, go ahead and blame tachyons. Whenever temporal distortions mean an older version of you has come back to scold the younger version of you, blame tachyons.

Meteorites delivered gold to Earth 8 September 2011Last updated at 18:24 By Leila Battison Science reporter A burst of meteorite impacts around 3.9 billion years ago delivered precious metals to Earth Scientists have shown that the Earth's surface became enriched with precious metals by impacting meteorites. The Earth's crust and mantle has considerably more gold than expected from favoured models of planetary formation. A study from the University of Bristol looked at some of the oldest rocks on Earth, demonstrating that gold was delivered by meteorites long after their formation.

Quantum Process To Slow Time And Savor The Moment Updated November 22, 2014 by in5d Alternative News * Click HERE to visit our Official Facebook page and be sure to "Like" us!!! (opens in a new window) * Also visit in5D Connection where you can find your soul mate or join one of our amazing groups. Tûranor PlanetSolar: World's Largest Solar Ship Set to Complete Trip Around the World The epic voyage of the Tûranor PlanetSolar – the world’s largest solar-powered boat – will soon come to a close as the ship closes in on its final stretch. The Swiss vessel is a full-bore high-tech solar harvesting machine whose deck is covered in 537 square meters of photovoltaic panels. The array produced enough energy for the boat to navigate the entire circumference of the Earth without any other means of energy. The Tûranor PlanetSolar is currently set to depart Abu Dhabi en route to their final port in Morocco – the same place the expedition launched on September 27th, 2010. The journey has come full circle in more than one respect, as it was not too long ago the only way to navigate the earth was by harnessing renewable energy with sails. The ship is ported in Abu Dhabi next to the impressive Capital Gate Tower, where treehugger’s Brian Merchant caught up with the crew during the World Future Energy Summit.

Brad Austen: The Different Dimensions and Our Multidimensional Selves Written by Brad Austen, Mindful-Meditations. A lot of material has been channeled in the new age community about the different dimensions and ascension. But what are these dimensions? Some black holes may be older than time Stuart Gary for ABC Science Online Updated Fri 6 May 2011, 5:48pm AEST An intriguing new hypothesis suggests some black holes could have formed before the formation of our universe. The work by Professor Bernard Carr from Queen Mary University in London and Professor Alan Coley from Canada's Dalhousie University, examines a cosmology in which the universe goes through cycles of birth and death. According to their work published on the pre-press website arXiv.org, some black holes could be remnants of a previous universe that collapsed in a big crunch and was then reborn in the big bang - 13.7 billion years ago. Called primordial black holes, they would be formed in the hyper dense conditions existing in the moments after the big bang.

Eta Carinae's 21-Year Outburst: A Cosmic Instant Replay! : Starts With A Bang “Not explaining science seems to me perverse. When you’re in love, you want to tell the world.” -Carl Sagan Does DNA Emit Light? Dan Eden for viewzone.com An incredible story! I get lots of suggestions for stories, and I really appreciate them.