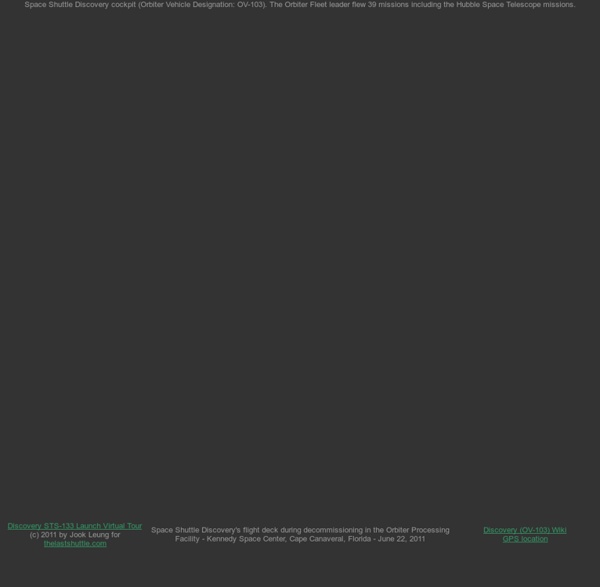 Top 10 Strangest Things In Space Space Let’s be honest: space is an absolutely crazy place. Most science fiction writers throw in a planet with two stars that looks vaguely like Southern California, and call it a day. But the cosmos is a lot stranger than we give it credit for: Everyone knows that shooting stars are just meteors entering the atmosphere, right? If you didn’t, congratulations—you just failed the fourth grade.

46 Fabulous Photos of Endeavour’s Last Ever Spacewalk May 27th, 2011: the last spacewalk for NASA’s Endeavour astronauts. Here, a fish-eye lens attached to an electronic still camera was used to capture this image of NASA astronaut Michael Fincke (top center) during the mission’s fourth session of extravehicular activity (EVA) as construction and maintenance continued on the International Space Station. Photo #1 by NASA Ars Magna Lucis et Umbrae The Great Art of Light and Shadow "The truth is, this Jesuit, as generally the most of his order, have a great ambition to be thoughte the greate and learned men of the world; and to that end writes greate volumes, on all subjects, with gay pictures and diagrams to set them forth, for ostentation And to fill up those volumes, they draw in all things, by head and shoulders; and these too for the most part, stolen from other authors. So that if that little, which is their owne, were separated from what is borrowed from others, or impertinent to their present arguments, their swollen volumes would shrink up to the size of our Almanacks. But enough of these Mountebankes*."[Robert Payne in a letter to Gilbert Sheldon, 1650]{*mountbanke = charlatan}

Otomata 16 Jul 2011 Click on the grid below to add cells, click on cells to change their direction, and press play to listen to your music. Update: Click here to get Otomata for your iPhone / iPod / iPad! Official facebook page: Virus glass Art & Design Ecoli Papiloma

Dark alien planet discovered by NASA An alien world blacker than coal, the darkest planet known, has been discovered in the galaxy. The world in question is a giant the size of Jupiter known as TrES-2b. NASA's Kepler spacecraft detected it lurking around the yellow sun-like star GSC 03549-02811 some 750 lightyears away in the direction of the constellation Draco. The researchers found this gas giant reflects less than 1 percent of the sunlight falling on it, making it darker than any planet or moon seen up to now. [The Strangest Alien Planets] "It's just ridiculous how dark this planet is, how alien it is compared to anything we have in our solar system," study lead-author David Kipping, an astronomer at the Harvard-Smithsonian Center for Astrophysics, told SPACE.com.

Highly Detailed 3D Characters From Top 3D Artists - 53 Examples Most 3d artists’ portfolios have at least a beautiful woman character in it and it will be no surprise that you’ll find a lot of them here. Now besides the curious gazing at these 3d pictures, you must realize the sisyphean work that is being put in these characters, the long hours to create the render and then applying the high quality texture to get incredible the incredible results illustrated below. Rage Captain Jack Sparrow Transient Princess 90 Accomplishments of Pres. Obama Which The Media Fails to Report.... "Professor Watson writes Hi friends, I am always being asked to grade Obama's presidency. In place of offering him a grade, I put together a list of his accomplishments thus far. I think you would agree that it is very impressive.

Earth-size planet found: Lightest exoplanet yet orbits Sun-like star Alpha Centauri B Newly found world orbits Alpha Centauri B, 4.3 light years from our SunIt is the lightest exoplanet yet found orbiting a Sun-like starIt is thought to be too hot for life, and there is likely no water presentBut presence suggests there may be other planets within the same system By Daily Mail Reporter Published: 08:18 GMT, 17 October 2012 | Updated: 12:37 GMT, 17 October 2012 An Earth-sized planet has been found orbiting a star in Alpha Centauri, our nearest neighbouring solar system. The mystery world circling Alpha Centauri B is thought to be much too hot to support life, with surface temperatures of around 1,500C.

2011 May 7 - Dawn of the Planets Discover the cosmos! Each day a different image or photograph of our fascinating universe is featured, along with a brief explanation written by a professional astronomer. 2011 May 7 Dawn of the Planets Image Credit & Copyright: Luis Argerich Explanation: This month, four of the five naked-eyeplanets gather along the eastern horizon near dawn.