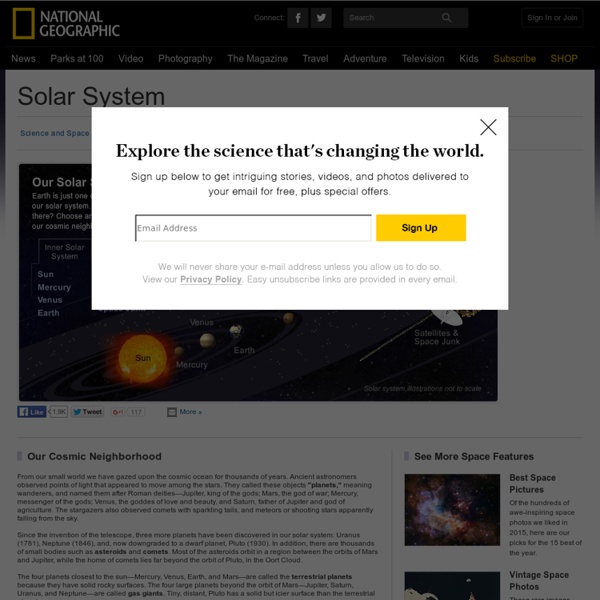 Our Cosmic Neighborhood From our small world we have gazed upon the cosmic ocean for thousands of years. Ancient astronomers observed points of light that appeared to move among the stars. They called these objects "planets," meaning wanderers, and named them after Roman deities—Jupiter, king of the gods; Mars, the god of war; Mercury, messenger of the gods; Venus, the goddes of love and beauty, and Saturn, father of Jupiter and god of agriculture. The stargazers also observed comets with sparkling tails, and meteors or shooting stars apparently falling from the sky. Since the invention of the telescope, three more planets have been discovered in our solar system: Uranus (1781), Neptune (1846), and, now downgraded to a dwarf planet, Pluto (1930). The four planets closest to the sun—Mercury, Venus, Earth, and Mars—are called the terrestrial planets because they have solid rocky surfaces. Nearly every planet—and some of the moons—has an atmosphere. Moons, Rings, and Magnetospheres

Earth from Space The NASA Earth Observations Photography database of images is a national treasure. We are publishing these selected photos and related captions on the Internet to provide a glimpse of this national treasure to the public. This database was compiled by our staff to illustrate some very interesting Earth features and processes, including cities as seen by our Astronauts from space. Earth from Space provides several ways to search the selected images. Each image is available in three resolutions and includes cataloging data and a caption. Monster Galaxy Cluster 'El Gordo' Packs Mass of 2 Quadrillion Suns AUSTIN, Texas — The largest cluster of galaxies seen yet in the early universe, a giant that astronomers have dubbed "El Gordo," could one day reveal secrets about the invisible dark matter that fills the universe, researchers said. El Gordo — which means "the fat one" in Spanish — is officially known as ACT-CL J0102-4915 and "is located more than 7 billion light-years from Earth, at a time when the universe was half its current age," study co-author John Patrick Hughes at Rutgers University told SPACE.com. The universe is about 13.7 billion years old. The monster galaxy cluster has mass about 2 quadrillion (that's 2 followed by 15 zeroes) times that of the sun, making it "the most massive known cluster in the distant universe." A galaxy cluster behemoth Galaxy clusters form through mergers of smaller groups of galaxies.

The Earth's Moon The Earth's Moon NASA. The Earth's one natural satellite, the Moon, is more than one quarter the size of Earth itself (3,474 km diameter). Because of its smaller size, the Moon's gravity is one-sixth of the Earth's gravity, as we saw demonstrated by the giant leaps of the Apollo astronauts. While there are only two basic types of regions on the Moon's surface, there are many interesting surface features such as craters, mountain ranges, rilles, and lava plains.

Wallpaper Videos See the universe come to life via animations, scientific visualizations, expert commentary, and more. The Moon  l  Phases, Orbit and distance from the Earth The Moon is the only natural satellite of Earth: orbit: 384,400 km from Earth diameter: 3476 kmmass: 7.35e22 kg History of The Moon Called Luna by the Romans, Selene and Artemis by the Greeks, and many other names in other mythologies. The Moon, of course, has been known since prehistoric times. It is the second brightest object in the sky after the Sun. October 24, 1999 - The Magnetic Carpet Of The Sun Discover the cosmos! Each day a different image or photograph of our fascinating universe is featured, along with a brief explanation written by a professional astronomer. October 24, 1999 The Magnetic Carpet Of The Sun Credit: SOHO Consortium, ESA, NASA

926 FREE Speaking Worksheets Learning to speak a new language is definitely a challenge. It’s very difficult for your students to do if they don’t practice on a regular basis. Luckily, you need to look no further because BusyTeacher.org has the tools to help your students practice their speaking - and want to do it, too! Let’s face it, students aren’t always jumping for joy at the opportunity to speak a language they aren’t 100 percent comfortable with. Students can be hesitant to speak for a wide variety of reasons - fear of mistakes, peer pressure, or lack of self-confidence are some of the main factors. BusyTeacher.org has 936 speaking worksheets to help you plan effective speaking lessons, which will get your students to break through their shyness and start talking!

October 8, 1998 - Far Side of the Moon Discover the cosmos! Each day a different image or photograph of our fascinating universe is featured, along with a brief explanation written by a professional astronomer. October 8, 1998 Explanation: Locked in synchronous rotation, the Moon always presents its well-known near side to Earth. But from lunar orbit, Apollo astronauts also grew to know the Moon's far side. This sharp picture from Apollo 16's mapping camera shows the eastern edge of the familiar near side (left) and the strange and heavily cratered far side of the Moon. 100 English Synonyms to Expand Your Vocabulary – Espresso English A synonym is a word with the same or a similar meaning as another word. For example, the words big and large are synonyms. Buy and purchase are also synonyms – although we tend to use “buy” in a more informal context, and “purchase” in a more formal context.

September 23, 1999 - Equinox and Eruptive Prominence Discover the cosmos! Each day a different image or photograph of our fascinating universe is featured, along with a brief explanation written by a professional astronomer. September 23, 1999 Explanation: Today, the Sun crosses the celestial equator and seasons change from Summer to Fall in the north and Winter to Spring in the southern hemisphere. 45 Ways To Avoid Using The Word ‘Very’ – Writers Write Writers Write is your one-stop resource for writers. Use these 45 ways to avoid using the word ‘very’ to improve your writing. Good writers avoid peppering their writing with qualifiers like ‘very’ and ‘really’. They are known as padding or filler words and generally add little to your writing. According to Collins Dictionary: ‘Padding is unnecessary words or information used to make a piece of writing or a speech longer. Synonyms include: waffle, hot air, verbiage, wordiness.’