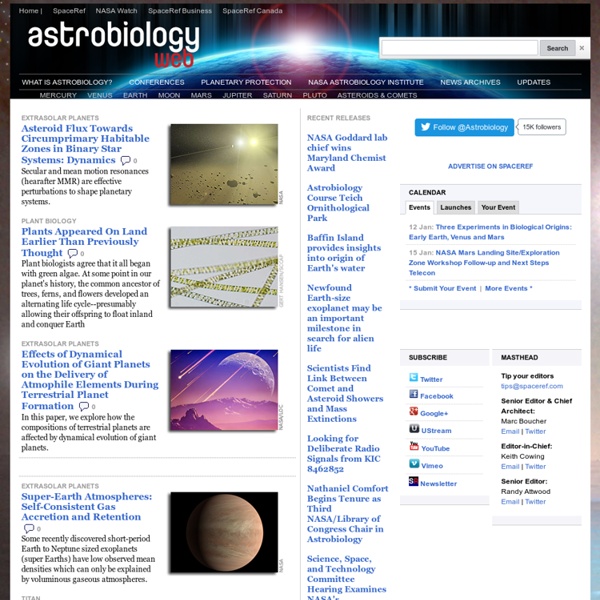 Genomics and Cell Biology Jeff Benca is an admitted ueber-geek when it comes to prehistoric plants, so it was no surprise that, when he submitted a paper describing a new species of long-extinct lycopod for publication, he ditched the standard line drawing and insisted on a detailed and beautifully rendered color reconstruction of the plant. This piece earned the cover of March's centennial issue of the American Journal of Botany.

Christ in Egypt by Richard Harty May 2, 2009 from WhatIsSpiritual Website The Stanford Astrobiology Course Welcome and introduction to website Astrobiology is at once one of the newest of scientific meta-disciplines, while at the same time encompassing some of our oldest and most profound questions. Beyond strictly utilitarian concerns, such as “what is for dinner?” and leaving offspring, asking the three great questions of astrobiology seems to be embedded in what it means to be human. While these questions are ancient questions, we now have the technological tools to grapple with them at a whole new scientific level. During recent centuries the Copernican and Darwinian Revolutions laid the way for Astrobiology.

How Incomprehensible Could Extraterrestrials Be? A few days ago Paul Gilster, the author of Centauri Dreams: Imagining and Planning Interstellar Exploration and the curator of Centauri Dreams , posted a thoughtful discussion of a blog entry I wrote (titled What's The Connection Between Deafness and SETI? ) His discussion and the resulting comments were fascinating, and in this post I want to carry on that conversation. I want to ask: Will extraterrestrials be so different from us as to be truly incomprehensible? I think the answer is no.

Astrobiology Center The Columbia Astrobiology Center (NYC-Astrobiology Consortium) The Columbia Astrobiology* Center represents a unique consortium of Columbia University departments, the Goddard Institute for Space Studies (NASA), and the American Museum of Natural History. It is an interdisciplinary effort dedicated to investigating the wide range of phenomena that may participate in the origin and evolution of life on Earth and beyond. Predicting what extra-terrestrials will be like: and preparing for the worst 1. Introduction ‘Astrobiology is the study of things that do not exist.’ This well-known statement can be dismissed as flippant cynicism, but one might suggest that in its vernacular way it is struggling to grasp what on earth (so to speak) we might expect to find.

Why the USA and NASA need astrobiology I am an astrobiologist, for 50 years an astronomer, and before that a physicist. With my colleague and friend Roger Angel, we started the process of learning how to detect Earth-like planets in 1985. I am a co-author of the NASA booklet The Terrestrial Planet Finder. I have served with scientific and technical teams to develop that mission since 1995. I have been a professor of astronomy at U. Arizona for the last 30 years, and I became P.I. for the Arizona team (LAPLACE, Life And PLanets Astrobiology CEnter) in 2003. How do fireflies light up Fireflies or lightning bugs make light within their bodies. This process is called bioluminescence and is shared by many other organisms, mostly sea-living or marine organisms. Fireflies light up to attract a mate.

Astrobiology: Life in the Universe How Did Life Become Complex? A species of yeast (Saccharomyces cerevisiae) seen in a scanning electrograph image. Credit: NASASource: [astrobio.net The evolution of multicellular life on Earth happened with a number of key transitions from simple organisms to complex. Could the same transitions happen on other worlds? Frank Rosenzweig, an evolutionary geneticist at the University of Montana, is looking into such questions over the next five years with funding from the NASA Astrobiology Institute. His lab studies how life evolves “complex traits,” factors that influence everything from lifespan to biodiversity.

18 Things Highly Creative People Do Differently This list has been expanded into the new book, “Wired to Create: Unravelling the Mysteries of the Creative Mind,” by Carolyn Gregoire and Scott Barry Kaufman. Creativity works in mysterious and often paradoxical ways. Creative thinking is a stable, defining characteristic in some personalities, but it may also change based on situation and context. Inspiration and ideas often arise seemingly out of nowhere and then fail to show up when we most need them, and creative thinking requires complex cognition yet is completely distinct from the thinking process. Neuroscience paints a complicated picture of creativity.