How Britain's foreign aid bonanza has created a new Goliath, towering over the Foreign Office. Mates for fish, Hamlet lessons, Facebook help – Foreign Office under pressure to justify aid spending. Tory rebels force Cameron to abandon promise to pass law on spending 0.7% of GDP on foreign aid. The Prime Minister wanted to make aid pledge legally bindingProposals would see £1 in every £142 earned in Britain spent on foreign aidLib Dems and Labour back the pledge and it is in the Coalition agreementBut Cameron has been forced to remove it from Queen's speech Government insists it is still hitting target even if it is not legally binding By Tom Mctague, Mail Online Deputy Political Editor. 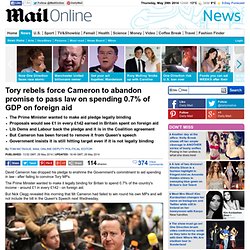 Fury over £3bn Britain spends on foreign aid to groups who waste it. Department for International Development has given £3.3 billion to 12 organisations that offer 'poor' or 'average' value for money£10.6 billion was spent on overseas aid in 2013 - yearly rise of 28 per centUK is second only to the U.S. in terms of development cash handed outBiggest beneficiary of British aid budget is the European CommissionCivil servants criticise Brussels for giving money to middle-income nationsDeputy Prime Minister Nick Clegg said UK 'should be proud to lead on aid' By Daniel Martin, Whitehall Correspondent Published: 23:26 GMT, 15 April 2014 | Updated: 07:42 GMT, 16 April 2014 Ministers have handed out billions in foreign aid even after being told that much of it is being wasted, it can be revealed. 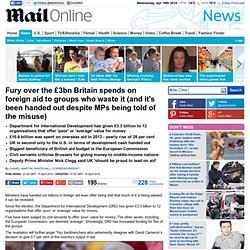 Since the election, the Department for International Development (DfID) has given £3.3 billion to 12 organisations that offer ‘poor’ or ‘average’ value for money. Five have been judged by civil servants to offer ‘poor’ value for money. . - Peter Bone MP. Britain's aid spending the highest in Europe. It leaves Britain’s aid budget second only to the United States, which spent £18.9 billion on aid, with an increase of only 1.3 per cent on the previous year. 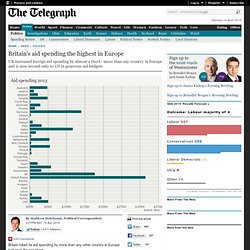 The increase was the biggest in the European Union and outstripped only by Japan, which expanded its debt forgiveness programme; Turkey, which has poured millions into the Syrian crisis on its border; and the UAE, which took “exceptional measures” to support Egypt. Britain hit David Cameron’s target of spending 0.7 per cent of GDP on aid for the first time and is the only major power to do so, joining the Nordic states of Denmark, Norway and Sweden. By contrast the US spent 0.19 per cent, Spain 0.16 per cent, Germany 0.38 per cent, France 0.41 per cent and Russia 0.03 per cent. Meanwhile, Australia, Canadia, France, the Netherlands and Portugal cut their aid spending, in the latter’s case by 20 per cent. Nigeria accepts more than £1bn UK aid, while its corrupt officials allow £2bn of oil to be stolen every year. Nigeria has accepted more than £1billion in UK aid, despite losing twice that sum every year through its corrupt oil industry, it has been revealedThe aid may not be going to those who need it most, with some being used to equip the country's navyTory backbenchers have criticised Prime Minister David Cameron's commitment to increased aid spending By Steve Doughty, Social Affairs Correspondent Published: 23:34 GMT, 19 September 2013 | Updated: 23:34 GMT, 19 September 2013 Nigeria has accepted more than £1billion in aid from Britain while losing twice that sum every year through corruption in its oil industry, it was revealed yesterday. 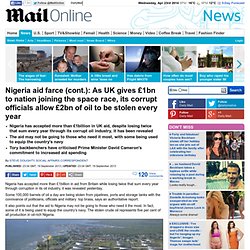 Some 100,000 barrels of oil a day are being stolen from pipelines, ports and storage tanks with the connivance of politicians, officials and military top brass, says an authoritative report. It also points out that the aid to Nigeria may not be going to those who need it the most. ‘The greatest victims are ordinary Nigerians. MPs' anger over £180m British aid boost to Pakistan when 70% of their own politicians pay NO tax. The £48m handed out in foreign aid the Government KNEW would be wasted. Cash spent with four organisations ranked poor for value for money Aid spending rising to 0.7 per cent of GDP while other departments face cuts Nearly half of aid budget spent funding activities of multilateral organisations By Daniel Martin. 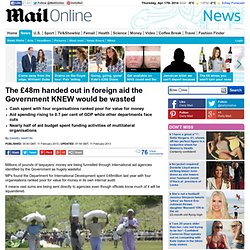 How your money is squandered on foreign aid. By Jonathan Foreman Published: 23:17 GMT, 1 January 2013 | Updated: 08:12 GMT, 2 January 2013 'Bad value': The former dean of education at Delhi University, Professor Anil Sadgopal, dismissed DfID's claims as nonsense The Education For All programme in India was hailed by our Government as an inspiring example of the effectiveness of Britain’s foreign aid budget. 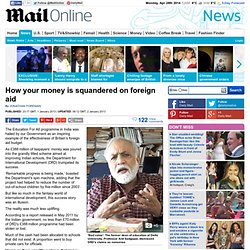 As £388 million of taxpayers’ money was poured into the grandly titled scheme aimed at improving Indian schools, the Department for International Development (DfID) trumpeted its success. ‘Remarkable progress is being made,’ boasted the Department’s spin machine, adding that the project had helped ‘to reduce the number of out-of-school children by five million since 2003’. But like so much in the fantasy world of international development, this success story was an illusion. The reality was much less uplifting. Much of the cash had been allocated to schools that did not exist.

‘Enrolment is not equal to attendance,’ he said. Has your tax money been spent in Equador, building a theme park to mark the equator...in the wrong place? - Mail Online - Steve Doughty's blog. News from Ecuador, where visitors flocking to a theme park exploiting one of the country’s best-known features may, it turns out, be in for a disappointment. 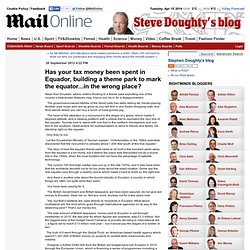 The government-owned Middle of the World park has stalls selling tat, bands playing Andean pipe music who are as good as you will find in any Essex shopping mall, and food stands where you can buy a lunch of roast guinea pig. The heart of the attraction is a monument in the shape of a globe, which marks 0 degrees latitude, and a viewing platform with a yellow trail to represent the very line of the equator. Tourists love to stand with one foot in the northern hemisphere and one foot in the southern.

Great picture for holidaymakers to send to friends and family, me standing right on the equator. Only they’re not. Warped priorities: £28bn cuts. Our Armed Forces slashed to the bone. So why is Cameron boasting to the UN about spending yet more billions on overseas aid? By Ian Birrell PUBLISHED: 22:24 GMT, 26 September 2012 | UPDATED: 17:59 GMT, 30 September 2012 At home, the talk is all about austerity. 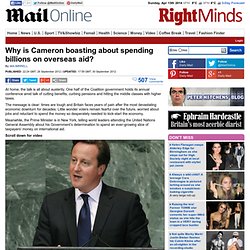 One half of the Coalition government holds its annual conference amid talk of cutting benefits, curbing pensions and hitting the middle classes with higher taxes. The message is clear: times are tough and Britain faces years of pain after the most devastating economic downturn for decades. Little wonder voters remain fearful over the future, worried about jobs and reluctant to spend the money so desperately needed to kick-start the economy.

Meanwhile, the Prime Minister is in New York, telling world leaders attending the United Nations General Assembly about his Government’s determination to spend an ever-growing slice of taxpayers’ money on international aid. Scroll down for video.