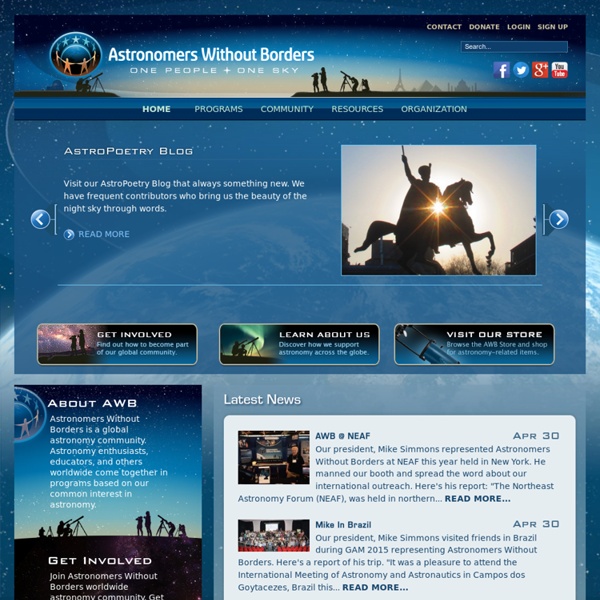 The Fermi Paradox - Wait But Why PDF: We made a fancy PDF of this post for printing and offline viewing. Buy it here. (Or see a preview.) Everyone feels something when they’re in a really good starry place on a really good starry night and they look up and see this: Some people stick with the traditional, feeling struck by the epic beauty or blown away by the insane scale of the universe. Personally, I go for the old “existential meltdown followed by acting weird for the next half hour.” Physicist Enrico Fermi felt something too—”Where is everybody?” A really starry sky seems vast—but all we’re looking at is our very local neighborhood. Galaxy image: Nick Risinger When confronted with the topic of stars and galaxies, a question that tantalizes most humans is, “Is there other intelligent life out there?” As many stars as there are in our galaxy (100 – 400 billion), there are roughly an equal number of galaxies in the observable universe—so for every star in the colossal Milky Way, there’s a whole galaxy out there. 1. 2.

Free Online Student Organizer | Schoolbinder Physicists Discover Geometry Underlying Particle Physics Physicists have discovered a jewel-like geometric object that dramatically simplifies calculations of particle interactions and challenges the notion that space and time are fundamental components of reality. “This is completely new and very much simpler than anything that has been done before,” said Andrew Hodges, a mathematical physicist at Oxford University who has been following the work. The revelation that particle interactions, the most basic events in nature, may be consequences of geometry significantly advances a decades-long effort to reformulate quantum field theory, the body of laws describing elementary particles and their interactions. Interactions that were previously calculated with mathematical formulas thousands of terms long can now be described by computing the volume of the corresponding jewel-like “amplituhedron,” which yields an equivalent one-term expression. Locality is the notion that particles can interact only from adjoining positions in space and time.

Introducing the TED All-Stars: 50+ classic speakers TED2014 will bring together more than 70 speakers with fresh thinking on topics as diverse as leadership, genetics and the magic of fireflies. But this is our 30th anniversary conference, and it’s also time to look back at some of the incredible ideas surfaced in the past. At TED2014, we will hold five All-Stars sessions that bring 50+ favorite TED speakers back to the stage. To create this powerhouse speaker lineup, we reached out to the TED community and asked: who do you want to see return to TED2014? From there, we invited speakers to appear in these special sessions. Some will give updates; others will reveal new ideas. Session 1, “Planet Dearth,” hosted by Kathryn Schulz Session 2, “Beauty and the Brain,” hosted by Guy Raz Session 3, “Where are We Now? Session 4, “I Heart Design,” hosted by Chee Pearlman. Session 5, “The Future is Ours,” hosted by Helen Walters Want to hear these speakers live? Starting March 17, follow TED2014 on the TED Blog »

The Five Greatest TED Talks of All Time by Maria Popova Democratizing knowledge, the meaning of life, and why everything we know about creativity is wrong. Today marks the fifth anniversary of TED talks becoming available to the world. As of this week, there are 1000 TED talks online in 81 languages, and they’ve been seen a cumulative half billion times. I can’t overstate how much TED has changed my life personally, and what a tour de force it has been culturally. Some time ago, I channeled my love for TED in a remix project called TEDify, collaging and animating soundbites from TED talks into narratives along different themes. Today, to celebrate the big occasion, I’ve tried to curate my five favorite TED talks of all time — operative word being “tried,” since it felt a bit like asking a parent to pick out her favorite child. When Elizabeth Gilbert took the TED stage in 2009, it didn’t take long to realize her talk would be among TED’s finest. Don’t be daunted. That is our poetry. That is how innovation happens. Share on Tumblr

How To Identify That Light In The Sky? What is that light in the sky? Perhaps one of humanity’s more common questions, an answer may result from a few quick observations. For example — is it moving or blinking? SEE ALSO: Night on Earth: biggest cities without power Still unsure? 125 Great Science Videos: From Astronomy to Physics & Psychology Astronomy & Space Travel A Brief, Wondrous Tour of Earth (From Outer Space) - Video - Recorded from August to October, 2011 at the International Space Station, this HD footage offers a brilliant tour of our planet and stunning views of the aurora borealis.A Universe from Nothing - Video - In 53 minutes, theoretical physicist Lawrence Krauss answers some big enchilada questions, including how the universe came from nothing.A Year of the Moon in 2.5 Minutes - Video - The Lunar Reconnaissance Orbiter has been orbiting the moon for over a year. The footage gets compressed into 2 slick minutes.A Day on Earth (as Seen From Space) - Video - Astronaut Don Pettit trained his camera on planet Earth, took a photo once every 15 seconds, and then created a brilliant time-lapse film.Atlantis's Final Landing at Kennedy Space Center - Video - After more than 30 years, the space shuttle era comes to a close. Video runs 30 minutes. Physics Biology & Chemistry Environment, Geology and & Ecology