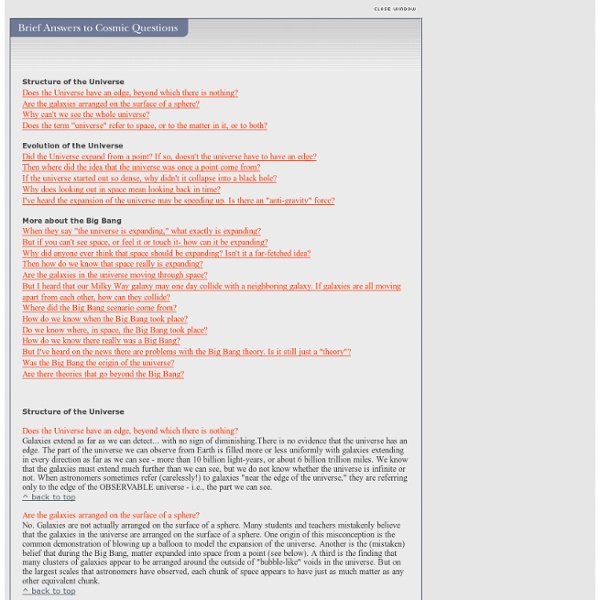 Science links Skip to Content Home » Science links Science links The Measurement of Science Albert Einstein’s greatest scientific “blunder” (his word) came as a sequel to his greatest scientific achievement. That achievement was his theory of gravity, the general theory of relativity, which he introduced in 1915. Two years later, in 1917, Einstein ran into a problem while trying to apply general relativity to the Universe as a whole. At the time, Einstein believed that on large scales the Universe is static and unchanging. But he realized that general relativity predicts that such a Universe can’t exist: it would spontaneously collapse in on itself.

400 Free Online Courses from Top Universities Advertisment Take online courses from the world’s top universities for free. Below, you will find 1,700 free online courses from universities like Yale, MIT, Harvard, Oxford and more. Our site also features collections of Online Certificate Programs and Online Degree & Mini-Degree Programs. Note: This page includes a lot of Massive Open Online Courses (MOOCs). If you want to enroll in a free version of a MOOC, please select the “Full Course, No Certificate” (edX) or “Audit” (Coursera) option.

The Shapes of CSS Learn Development at Frontend Masters CSS is capable of making all sorts of shapes. Squares and rectangles are easy, as they are the natural shapes of the web. Add a width and height and you have the exact size rectangle you need. Add border-radius and you can round that shape, and enough of it you can turn those rectangles into circles and ovals. We also get the ::before and ::after pseudo elements in CSS, which give us the potential of two more shapes we can add to the original element. 40 technologies to watch in 2011 If the popular misreading of Mayan mythology is correct, we have fewer than two more years left on this Earth. That leaves precious little time for the tech industry to develop and perfect of all the cool technologies that sci-fi authors have dreamed up over the years. Still, while a December 2012 apocalypse may spell doom for the commercial viability of hovercars, it doesn't mean that the next couple of years in tech will be dull — quite the contrary. 2011 is already shaping up to be a banner year for tech and web innovation. Below is a list of over 40 websites, apps, companies, gadgets and technologies that the editors of Mashable think that you should keep an eye on over the coming year.

GURUI IN PHOTOSHOP Many people can use Photoshop, but only a select few can call themselves gurus. Learn all the methods in the 20 tutorials below and you’ll be well on your way to joining this elite. Rather than focus on tuts for beginners, intermediates or advanced users, we’ve simply chosen ones which produce jaw-dropping effects. All of them are easy to follow, although most do require at least some prior knowledge and experience. 1. Colorful Plexi Text Effect The end of the net as we know it Posted on 21 Jan 2011 at 13:34 ISPs are threatening to cripple websites that don't pay them first. Barry Collins fears a disastrous end to net neutrality You flip open your laptop, click on the BBC iPlayer bookmark and press Play on the latest episode of QI. But instead of that tedious, plinky-plonky theme tune droning out of your laptop’s speakers, you’re left staring at the whirring, circular icon as the video buffers and buffers and buffers... That’s odd.

Your Sky by John Walker Welcome to Your Sky, the interactive planetarium of the Web. You can produce maps in the forms described below for any time and date, viewpoint, and observing location.