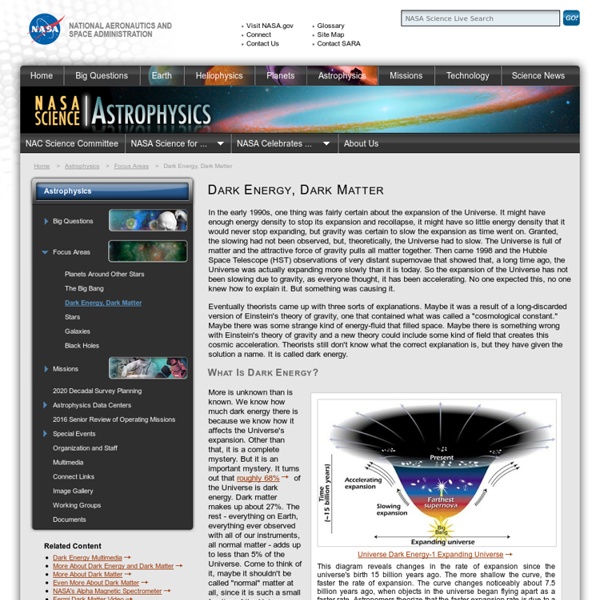 Dark Energy, Dark Matter In the early 1990s, one thing was fairly certain about the expansion of the Universe. It might have enough energy density to stop its expansion and recollapse, it might have so little energy density that it would never stop expanding, but gravity was certain to slow the expansion as time went on. Granted, the slowing had not been observed, but, theoretically, the Universe had to slow. The Universe is full of matter and the attractive force of gravity pulls all matter together. Then came 1998 and the Hubble Space Telescope (HST) observations of very distant supernovae that showed that, a long time ago, the Universe was actually expanding more slowly than it is today. Eventually theorists came up with three sorts of explanations. What Is Dark Energy? More is unknown than is known. One explanation for dark energy is that it is a property of space. Another explanation for how space acquires energy comes from the quantum theory of matter. What Is Dark Matter? Related:  CoP - Using Astronomy as an aid to teaching STEM • Subatomic particle colliders

Exploring Mars Meet Joe Incandela, Higgs boson -- or 'God Particle' -- detective Physicist Joe Incandela announced the discovery of the Higgs boson on July 4, 2012. The mosaic of photos of colleagues spells "CMS," which stands for Compact Muon Solenoid. CMS is one of the experiments at the Large Hadron Collider that detected the particle. The Large Hadron Collider is located at CERN, the European Organization for Nuclear Research, near Geneva, Switzerland. The Higgs boson, the elusive particle that scientists had hoped to find for decades, helps explain why matter has mass. The ATLAS experiment, seen here in 2011, is about two stories taller than CMS. Much of three stories of electronics at CMS are involved in making split-second decisions about what data to keep and what to discard. A technician works on the CMS experiment. Joe Incandela, the spokesperson for CMS, says that about 4,000 scientists collaborate on the experiment. Physicists in the CMS control room. Evaldas Juska, an engineer, is working on computers involved with CMS. Exploring the universe at CERN LHCb

Beyond the speed of light With potentially groundbreaking data published in the last few weeks, Conor O’Nolan talks about the experiments that could change physics forever Two weeks ago scientists at OPERA in Italy, working in collaboration with CERN in Geneva, published a paper which suggested that they have observed neutrinos travelling faster than the speed of light. News of their apparent discovery went viral instantly, and the findings were published on a number of news websites before the CERN website was even updated. Should these results be verified, a large proportion of physics will have to be completely rewritten. In the seventeenth century, Issac Newton invented Newtonian mechanics. In 1905, Albert Einstein published his theory of special relativity, which allowed particle physics to be better understood than if classical mechanics was used. Wolfgang Pauli postulated the neutrino in 1930 to explain the observed discrepancies in beta decay (A type radioactive decay).

OMG SPACE OMG SPACE is the thesis project of Margot Trudell, an OCAD graduate of their graphic design program in Toronto, Canada. This website aims to illustrate the scale and the grandeur of our solar system, as well as illustrate through the use of infographics our work in the exploration of our solar system with various spacecraft. Despite all the work that scientists are putting into space exploration and research, and all that we've learned and acheived over the past half-century, the general public isn't very aware of it. I believe that this mostly due to how this information is communicated to the general public, in a very academic and scientific manner. All the planets on this website are to scale, including the sun and dwarf planets.

Extrasolar planets What is the God particle? | Angels & Demons - The science behind the story The term 'The God particle' was coined by the physicist Leon Lederman in his 1993 popular science book, The God Particle: If the Universe Is the Answer, What Is the Question? The particle that the book title refers to is the 'Higgs boson'. The particle we now call the Higgs boson has never been observed. What is the Higgs boson? The theories and discoveries of thousands of physicists over the past century have resulted in a remarkable insight into the fundamental structure of matter: everything in the Universe is found to be made from twelve basic building blocks called fundamental particles, governed by four fundamental forces. Our best understanding of how these twelve particles and three of the forces are related to each other is encapsulated in the Standard Model of particles and forces. Peter Higgs at CERN in April 2008. However, in order for this unification to work mathematically, it requires that force-carrying particles have no mass. What does the Higgs boson have to do with God?

Space Today Online -- The Sun and the Solar System -- Sunspots Yes! The spots are storms on the superhot Sun and they are keeping Earth aglow, according to the U.S. space agency. Noting that the Sun is especially hot right now, NASA says our star is spewing out electromagnetic radiation in the midst of an interesting storm season. A lot of that energy arrives at Earth. However, even as plasma and high-energy particles from the Sun light up Earth's ionosphere, orbiting detectors and other scientific equipment compose an early-warning system help us keep satellites in space and power grids on the surface of the planet safe. Solar Cycles. NOTE: you never should look directly at the Sun for any reason. Cycle Numbers. The Latest Solar Maximum. The Solar Cycle 23 peak seems to have been the month of April 2000 when the smoothed sunspot number (SSN) was 120.8. What are smoothed sunspot numbers? Cycle 23 like Cycle 20. Magnetic flip. Negative Effects. The Challenger disaster of 1986 had set shuttle flights back three years.

Hubble Telescope Classics Hubble Telescope Classics Technology in Astronomy 'God particle' unveiled? Super-collider scientists declare victory | Technology GENEVA (AP) — To cheers and standing ovations, scientists at the world's biggest atom smasher claimed the discovery of a new subatomic particle Wednesday, calling it "consistent" with the long-sought Higgs boson — popularly known as the "God particle" — that helps explain what gives all matter in the universe size and shape. "We have now found the missing cornerstone of particle physics," Rolf Heuer, director of the European Center for Nuclear Research (CERN), told scientists. He said the newly discovered subatomic particle is a boson, but he stopped just shy of claiming outright that it is the Higgs boson itself — an extremely fine distinction. "As a layman, I think we did it," he told the elated crowd. "We have a discovery. We have observed a new particle that is consistent with a Higgs boson." The Higgs boson, which until now has been a theoretical particle, is seen as the key to understanding why matter has mass, which combines with gravity to give an object weight. "Thanks, nature!"

Saturn storm: Cassini spacecraft pictures of monster storm dying out. An overview of the planet showing how ridiculosuly long this storm was, wrapping clearly around Saturn. The rings are edge-on and very thin, making them hard to spot. The shadow of the rings on the planet's clouds is obvious. Click to embiggen. Image credit: NASA/JPL-Caltech/SSI In late 2010, Saturn got a bit of acne. This happens frequently on the ringed planet, but in this case the storm forgot to stop. This new image from the Cassini spacecraft (below) shows the storm at its height of glory. The storm persisted for months, and then fizzled out. The series of photos from the Cassini spacecraft (below) shows the progress of the storm over time (it’ll be easier to see this in the much bigger version of the picture ). This color-enhanced sequence of images shows the head of the storm wrapping around the planet, meeting its tail, and dying. Image credit: NASA/JPL-Caltech/Space Science Institute It’s not clear why, though the fact that the tail and head collided must be involved.

'Brighter than a full moon': The biggest star of 2013... could be Ison - the comet of the century - Science - News Comet Ison could draw millions out into the dark to witness what could be the brightest comet seen in many generations – brighter even than the full Moon. It was found as a blur on an electronic image of the night sky taken through a telescope at the Kislovodsk Observatory in Russia as part of a project to survey the sky looking for comets and asteroids – chunks of rock and ice that litter space. Astronomers Vitali Nevski and Artyom Novichonok were expecting to use the International Scientific Optical Network's (Ison) 40cm telescope on the night of 20 September but clouds halted their plans. It was a frustrating night but about half an hour prior to the beginning of morning twilight, they noticed the sky was clearing and got the telescope and camera up and running to obtain some survey images in the constellations of Gemini and Cancer. When the images were obtained Nevski loaded them into a computer program designed to detect asteroids and comets moving between images.