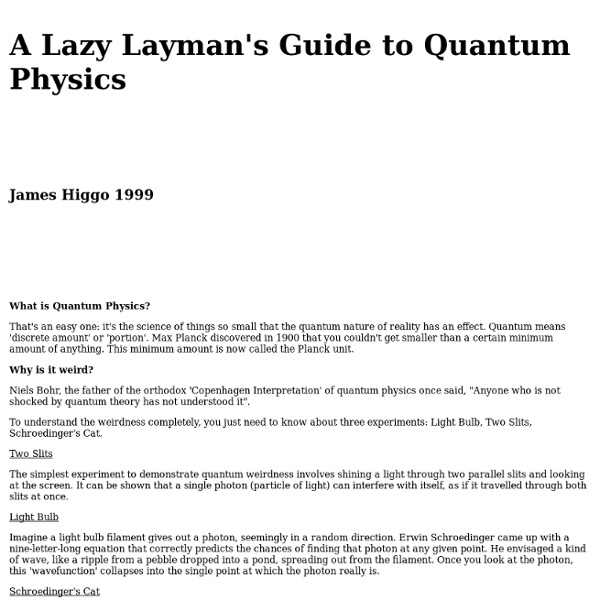 That's an easy one: it's the science of things so small that the quantum nature of reality has an effect. Quantum means 'discrete amount' or 'portion'. Max Planck discovered in 1900 that you couldn't get smaller than a certain minimum amount of anything. This minimum amount is now called the Planck unit. The meaning of quantum physics is a bit of a taboo subject, but everyone thinks about it. To make it all a bit more respectable, it is better to say 'ontology' than 'meaning' -- it's the same thing. Copenhagen Interpretation (CI) This is the granddaddy of interpretations, championed by the formidable Niels Bohr of Copenhagen university. The CI has a bit of a cheek calling itself an interpretation, because it essentially says "thou shalt not ask what happens before ye look". When you do try to take Copenhagen seriously you come to the conclusion that consciousness and particle physics are inter-related, and you rush off to write a book called The Dancing Wu-Li Masters. Consistent Histories Related:  Universe & Multiverse • Quantum Playground

Schrodinger's 'Kitten'? Large-Scale Quantum Entanglement Achieved By Two Physics Labs Uncategorized Published on July 26th, 2013 | by Michael Ricciardi July 26th, 2013 by Michael Ricciardi In the famous gedanken experiment posited by famed quantum physicist Erwin Schrodinger in the 1930′s, a hypothetical cat resides in a closed box with a radioactive atom which may exist in a stable or decaying state; if the atom decays, it triggers the release of a poison contained in a flask, which would kill the poor, putative puttycat. But until we open the box, the cat is both alive and dead (note: this previous description has been edited/corrected for accuracy). The opening of the box is an analogy for performing a measurement on the quantum system. For many physicist, the idea of applying this quantum effect to larger scale systems is absurd. Large-Scale Quantum Effect Achieved – More Like a ‘Kitten’ Than A ‘Cat’ Schrödinger’s cat: a cat, a flask of poison, and a radioactive source are placed in a sealed box. Applications and Meaning of the Experiments About the Author

Scientists Achieve Quantum Teleportation One of the hurdles to teleportation has been overcome, with the reliable movement of quantum information between two objects separated by a short distance. The achievement is still a very, very long way from the movements familiar from science fiction, but strengthens our confidence in the theory of quantum entanglement, one of the most controversial aspects of modern physics. It may, moreover, assist the much closer goal of quantum computing. Certain subatomic particles always exist in paired states. However, the distance between the two this means that the information of what has happened to the one particle must be transmitted infinitely fast – faster than the speed of light. In 1964 physicist John Stewart Bell came up with an idea for an experiment to test whether entanglement is real. The Delft team trapped electrons in very low temperature diamonds, which team leader Ronald Hanson describes as “miniprisons”. As usual, the result does not come out of nowhere.

The Everett Interpretation This FAQ shows how quantum paradoxes are resolved by the "many-worlds" interpretation or metatheory of quantum mechanics. This FAQ does not seek to that the many-worlds interpretation is the "correct" quantum metatheory, merely to correct some of the common errors and misinformation on the subject floating around. As a physics undergraduate I was struck by the misconceptions of my tutors about many-worlds, despite that it seemed to resolve all the paradoxes of quantum theory . The objections raised to many-worlds were either patently misguided or beyond my ability to assess at the time , which made me suspect (confirmed during my graduate QFT studies) that the more sophisticated rebuttals were also invalid. I have attempted, in the answers, to translate the precise mathematics of quantum theory into woolly and ambiguous English - I would appreciate any corrections. See "Does the EPR experiment prohibit locality?" eg "In quantum field theory the wavefunction becomes an operator".

What Really Happens When Earth’s Magnetic Field Flips? A geomagnetic apocalypse may not be on the horizon, but there is some fascinating science behind the doomsday hype. PUBLISHED January 31, 2018 Many times over our planet’s history, Earth’s magnetic poles have reversed, meaning that sometimes a compass pointing north will be aimed at Antarctica rather than the Arctic. This might sound strange, but it’s a relatively predictable quirk. That is, until this week, when a book excerpt describing the phenomenon appeared online. True, life on Earth almost certainly will be different than it is today in multiple thousands of years. First thing’s first: Are we all going to die? We are all going to die, eventually. Fine. If geologic history repeats itself, Earth’s magnetic poles should eventually swap places. That means we’re a bit overdue for a total reversal, and some data do, in fact, suggest that a geomagnetic reversal is geologically imminent. OK. Also unclear. Bummer, that sounds boring. So there’s nothing at all to worry about? Not exactly.

Gravitational-wave finding causes 'spring cleaning' in physics Detlev van Ravenswaay/Science Photo Library Artist's rendering of 'bubble universes' within a greater multiverse — an idea that some experts say was bolstered with this week's discovery of gravitational waves. On 17 March, astronomer John Kovac of the Harvard-Smithsonian Center for Astrophysics presented long-awaited evidence of gravitational waves — ripples in the fabric of space — that originated from the Big Bang during a period of dramatic expansion known as inflation. By the time the Sun set that day in Cambridge, Massachusetts, the first paper detailing some of the discovery’s consequences had already been posted online1, by cosmologist David Marsh of the Perimeter Institute for Theoretical Physics in Waterloo, Canada, and his colleagues. Cosmologist Marc Kamionkowski of Johns Hopkins University in Baltimore, Maryland, agrees that some axion models no longer work, “because they require inflation to operate at a lower energy scale than the one indicated by BICEP2”. Linde agrees.

Introduction to quantum mechanics Many aspects of quantum mechanics are counterintuitive[3] and can seem paradoxical, because they describe behavior quite different from that seen at larger length scales. In the words of quantum physicist Richard Feynman, quantum mechanics deals with "nature as She is – absurd".[4] For example, the uncertainty principle of quantum mechanics means that the more closely one pins down one measurement (such as the position of a particle), the less accurate another measurement pertaining to the same particle (such as its momentum) must become. The first quantum theory: Max Planck and black-body radiation[edit] Hot metalwork. Thermal radiation is electromagnetic radiation emitted from the surface of an object due to the object's internal energy. Heating it further causes the colour to change from red to yellow, white, and blue, as it emits light at increasingly shorter wavelengths (higher frequencies). Predictions of the amount of thermal radiation of different frequencies emitted by a body.

The Planets Today : A live view of the solar system TESLA Series Technologies | Synergistic Research The all new TESLA Series cables combine three revolutionary technologies based on the work of Nikola Tesla – the Tesla Tricon cable geometry, Zero Capacitance Active Shielding, and a proprietary Patent Pending conditioning process in a new line of cables that are smaller and more flexible than our previous models with significantly higher performance and value. TESLA Cables allow you to hear deeper into recordings with detail that’s transparent and non-fatiguing. In fact starting at the Accelerator interconnect and speaker cable level, TESLA Cables outperform every cable we have ever pitted them against regardless of price. These extraordinary cables represent a new benchmark by which all other cables can be measured and they do this with seemingly opposite strengths. Quantum Tunneling High Voltage Conditioning Quantum Tunneling

Physics for the 21st Century Course Overview Welcome to Physics for the 21st Century: an on-line course that explores the frontiers of physics. The 11 units, accompanied by videos, interactive simulations, and a comprehensive Facilitator's Guide, work together to present an overview of key areas of rapidly-advancing knowledge in the field, arranged from the sub-atomic scale to the cosmological. About This Course | Using This Site

Day and Night World Map +1 this page: Follow us on Google+: Like/share this page: Follow us on facebook: The map below shows the current position of the Sun and the Moon. It shows which parts of the Earth are in daylight and which are in night. See where the moon is over the horizon Map notes The day and night parts of the Earth shown are as of Saturday, April 12, 2014 at 00:08:00 UTC.The Sun's position is marked with this symbol: . Position of the Sun On Saturday, April 12, 2014 at 00:08:00 UTC the Sun is at its zenith at these coordinates: The ground speed of the movement is currently 458.76 meters/second, 1651.5 km/hour, 1026.2 miles/hour or 891.8 knots.The table below shows the Sun position compared to the time and date above: Position of the Moon On Saturday, April 12, 2014 at 00:08:00 UTC the Moon is at its zenith at these coordinates: Locations with the Sun near zenith The following table shows 10 locations with Sun near zenith position in the sky. Advertising

The Spooky World Of Quantum Biology Michael Garfield The new science of quantum biology is teaching us about how the actual behavior of evolution is governed by disconcertingly spooky processes – time travel being one of them. Will quantum computation finally be realized by biomimicry, in organic systems? Evolution is the new (old) computation...and we're about to take the reins. One hundred and fifty years ago, paleontologist Thomas Henry Huxley (an autodidact and philosopher who coined the term “agnostic” and was known as “Darwin’s Bulldog” for his passionate defense of natural selection) asserted that humankind would eventually take the processes of evolution into our own hands. Within a few decades of his proclamation, a cadre of equally brilliant scientists including Werner Heisenberg, David Bohm, and Max Planck began to unravel the mysterious properties of quantum mechanics. The premise is simple. It’s a promising avenue for people with big plans for strong AI or virtual reality. What does this all mean?