Largest star ever discovered, compared to our Sun 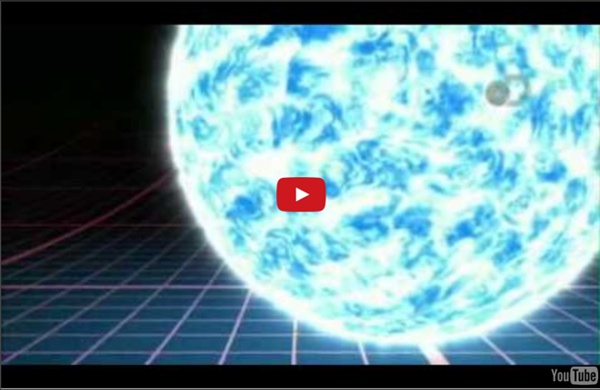 The Quest For Life How did life on Earth begin? Is there life beyond our planet? Is there a future for humankind on other planets? This documentary examines the search for life, from its origins on Earth to possibilities in space. The quest for answers takes EXPLORING SPACE to earthly locales ranging from Greenland to the mountains of eastern Mexico, from a French vineyard to a research facility in Japan – as well as deep into outer space. Earth may be a rare environment uniquely designed for nurturing living organisms, but as humans explore the creation of the planet, the realization grows that the answers to the origins of life may lie beyond earthly bounds. Watch the full documentary now (playlist - 2 hours) Scientist creates lifelike cells out of metal Scientists trying to create artificial life generally work under the assumption that life must be carbon-based, but what if a living thing could be made from another element? One British researcher may have proven that theory, potentially rewriting the book of life. Lee Cronin of the University of Glasgow has created lifelike cells from metal — a feat few believed feasible. Even more remarkable, Cronin has hinted that the metal-based cells may be replicating themselves and evolving. "I am 100 percent positive that we can get evolution to work outside organic biology," he said. The high-functioning "cells" that Cronin has built are constructed from large polyoxometalates derived from a range of metal atoms, like tungsten. The metallic bubbles are certainly cell-like, but are they actually alive? Cronin's team has also created bubbles inside of bubbles, which opens the door to the possibility of developing specialized "organelles." The early results have been encouraging.

Monster of The Milky Way Astronomers are closing in on the proof they’ve sought for years that one of the most destructive objects in the universe - a super massive black hole - lurks at the center of our own galaxy. Could it flare up and consume our entire galactic neighborhood? NOVA takes us on a mind-bending investigation into one of the most bizarre corners of cosmological science: black hole research. From event horizon to singularity, the elusive secrets of supermassive black holes are revealed through stunning computer-generated imagery, including an extraordinary simulation of what it might look like to fall into the belly of such an all-devouring beast. Space, itself, is falling inside the black hole. Watch the full documentary now

Cosmic Voyage Nominated for an Academy Award, this 36-minute IMAX production offers a state of the art, computer generated journey through the universe, and tries to pinpoint the role of human beings cohabitating within its vastness. Among the topics included are a variety of the greatest scientific theories known to exist - some of which had never before been visualized on film - as well as a guided tour through the cosmos and solar system, and a look at the nature of black holes and exploding supernovas. This IMAX offering presents us with not only one but two journeys - one in space (going from the entire universe to quarks) and one in time (going from the first cells to human beings). These are both monumental enterprises, but unfortunately this half-hour movie can only offer us an inkling of either. Watch the full documentary now

300 millions d'ans UFO dents de roues trouvait dans la ville russe de Vladivostok | Observations OVNI hotspot During a cold winter evening a resident of Vladivostok found a rail-shaped metal detail which was pressed in one of the pieces of coal that the man used to heat his home. Mesmerized by his discovery, the responsible citizen decided to seek help from the scientists of Primorye region. After the metal object was studied by the leading experts the man was shocked to learn about the assumed age of his discovery. The metal detail was supposedly 300 million years old and yet the scientists suggest that it was not created by nature but was rather manufactured by someone. The question of who might have made an aluminum gear in the dawn of time remains unanswered. Nowadays, finding a strange artifact in coal is a relatively frequent occurrence. The metal detail which was found by Vladivostok resident is yet another discovery which perplexed the scientists. Another question that interests Russian scientists is whether the aluminum alloy is of Earthly origin.

Cosmos: A Personal Voyage With Cosmos, Carl Sagan and his wife and co-writer, Ann Druyan, brilliantly illustrated the underlying science of his same-titled book, placing the human species within a space-and-time context that brought the infinite into stunningly clear view. The series, which originally aired in 1980 on PBS, has been seen by more than 700 million people worldwide and remains a high-water mark in miniseries history. Sagan lucidly explains such topics as Einstein's theory of relativity, Darwin's theory of evolution, and the greenhouse effect, bringing the mysteries of the universe down to a layman’s level of understanding. The footage in these remastered, seven-DVD or seven-VHS sets is as fresh and riveting as it was two decades ago and is certain to fire the imaginations of a whole new generation of viewers. This is THE GREATEST television series ever. This documentary inspired me to a love of science, learning, and freedom of inquiry that have shaped both my interests and intellectual curiosity.

Miniature Chameleons Discovered—Fit on Match Tip Photograph courtesy Frank Glaw Match-tip tiny, Brookesia micra (juvenile pictured) is the smallest of four new chameleon species found on the African island country of Madagascar. With an average adult length of just over an inch (2.9 centimeters) from snout to tail, B. micra is among the tiniest reptiles in the world. (Related: "Record-Breaking Chameleons Live Only a Few Months.") Scientists think the diminutive new chameleon species might represent extreme cases of island dwarfism, whereby organisms shrink in size due to limited resources on islands. "The extreme miniaturization of these dwarf reptiles might be accompanied by numerous specializations of the body plan, and this constitutes a promising field for future research," study leader Frank Glaw of Germany's Zoological State Collection said in a statement.

The Elegant Universe Adapted from a provocative book by Brian Greene, this deeply engrossing documentary -- which originally aired on PBS's NOVA in three parts -- attempts to explain the controversial string theory, a complicated scientific proposal that, in short, posits a single explanation for many of the universe's mysteries. As affable an egghead as you're likely to find, Greene engages an array of physicists in his examination of string theory, which in part blends Einstein's theory of relativity with the complex laws governing quantum mechanics. Although mind-numbing technical terms are kept to a minimum, those of us not conversant with advanced physics might feel a bit lost at times. Still, the subject is undeniably fascinating, and some of the conclusions are nothing short of mind-blowing: a reasoned, professional discussion of a universe encompassing 11 separate dimensions certainly calls Johnny Carson's "I did not know that" to mind. Watch the full documentary now (playlist - 2 hours, 48 minutes)

Here Comes The Sun If it were up to the sun, we would have no energy problem. Every half hour on the Earth's surface, there is more than enough light to provide energy needs for the whole world in a year. We don't have an energy problem, we have a conversion problem. If we are able to harvest sunlight in smart way, then we can prevent a global energy crisis. That sounds nice but that does not mean it will succeed, at least that is what many different bodies want us to believe. Radical German government measures have proved that it is possible. Watch the full documentary now - Pale Blue Dot: A Vision of the Human Future in Space The earth is a very small stage in a vast cosmic arena. Think of the rivers of blood spilled by all those generals and emperors so that in glory and triumph, they can become the momentary masters of a fraction of a dot. Think of the endless cruelties visited by the inhabitants of one corner of this pixel on this scarcely distinguishable inhabitants of some other corner. How frequent their misunderstandings, how eager they are to kill one another, how fervent their hatred. As the ancient myth makers knew, we're children equally of the earth and the sky. Which aspects of our nature will prevail is uncertain, particularly when our visions and prospects are bound to one small part of this small planet earth. Watch the full documentary now