Most Amazing Time Lapse Video of Milky Way Ever Made. Seriously. 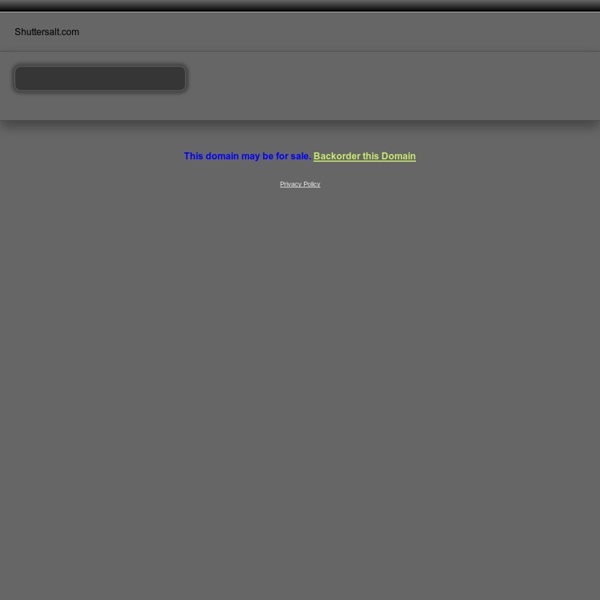 Quark Star (update) Some of the strange stuff that is coming out about quark stars: 1) that quark stars may be connected to dark matter (or even dark energy?) Some dark matter might just be “strangelets” roaming the cosmos, blasted free from quark stars: or 2) That some smaller sized black holes may actually be quark stars: “Some black holes may actually be ‘quark stars’:” or Lofted Forest Home: Organic Curves & Natural Materials Good things come to those who wait – particularly in a work of uniquely detailed and highly curved architecture. Nearly a decade in the making, this structure by Robert Harvey Oshatz is much like a tree house – lofted toward the top of the canopy around it – only bigger, grander, more complex and curved than most any tree house in the world. The perimeter of the structure is pushed out into the forest around it, curving in and out to create views as well as a sense of intimacy with the coniferous and deciduous tree cover.

The 14 Best Classic Twilight Zone Episodes The Twilight Zone was such a groundbreaking series that it influenced our popular culture to a level many of us don’t even realize. From Rod Serling’s silky and smoke-filled introductions, to the inevitable twist ending, the Twilight Zone’s black and white years were doubtless its best. While many of the twists have become so well known in the ensuing years as to lost much of their sting, if you can imagine watching these broadcasts in the 60s on an old black and white set, you might just get a feel for how revolutionary it was. BACK TO THE FUTURE : Irina Werning - Photographer I love old photos. I admit being a nosey photographer. As soon as I step into someone else’s house, I start sniffing for them.

Watermark Tee by Sweet Verbana Hello U-Create readers! I am so excited to be guest posting here today. It just so happens to be my first guest post and I'm still a little shocked that it's here at Ucreate, one of my favorite blogs! A little bit about me.. I'm from a little town called Keller, Texas. I'm a junior at Texas A&M University (whoop!). Scientists Now Know: We're From Sagittarius Dwarf Galaxy! Scientists Now Know: We're Not From Here! Summary & comments by Dan Eden for Viewzone "This first full-sky map of Sagittarius shows its extensive interaction with the Milky Way," Majewski said. "Both stars and star clusters now in the outer parts of the Milky Way have been 'stolen' from Sagittarius as the gravitational forces of the Milky Way nibbled away at its dwarf companion.

Plitvice Lakes National Park, Croatia The stunning Plitvice Lakes National Park lies in the Lika region of Croatia. The park is surrounded by the mountains Plješevica, Mala Kapela, and Medveđak, which are part of the Dinaric Alps. The 16 blue-green Plitvice Lakes, which are separated by natural dams of travertine, are situated on the Plitvice plateau. Waterfalls connect the lakes, and the tallest waterfall is Veliki Slap at 70 meters (230 feet) tall. The Plitvice lakes area boasts a large variety of interesting and colorful flora and fauna.

Luxury Property, Interior Design, Exclusive Travel & Bespoke Furniture Singita, Luxury African Game Reserve Singita, meaning place of miracles, is a group of world-renowned games reserves in Africa which provide a positive balance of hospitality, conservation and community for all of their guests. The luxury lodges contain an eclectic mix of African heritage and European contemporary furniture which adds a luxury feel to this unique African game reserve.

25 Spectacular Movies You (Probably) Haven’t Seen Midnight in Paris Woody Allen’s latest places starving writer Owen Wilson in Paris with his fiancée, Rachel McAdams. Searching for inspiration for his incomplete novel, Owen begins taking strolls around the city at night where he discovers an unexpected group of people. I wish I could be more specific, but it would ruin the surprise. Darkest exoplanet spotted by astronomers 12 August 2011Last updated at 11:09 By Jason Palmer Science and technology reporter, BBC News TrES-2b is literally darker, on average, than coal A dark alien world, blacker than coal, has been spotted by astronomers. The Jupiter-sized planet is orbiting its star at a distance of just five million km, and is likely to be at a temperature of some 1200C.

Bottle Flower series by Makoto Azuma This is our 2nd environment-related post to commemorate Earth Day. Floral artist Makoto Azuma has been challenging our relationship with plants for quite some time now. It’s not a commonly discussed topic, especially amongst floral designers who make their living by often ending the life of plants in order to make a pretty display. 50 Life Secrets and Tips Memorize something everyday.Not only will this leave your brain sharp and your memory functioning, you will also have a huge library of quotes to bust out at any moment. Poetry, sayings and philosophies are your best options.Constantly try to reduce your attachment to possessions.Those who are heavy-set with material desires will have a lot of trouble when their things are taken away from them or lost. Possessions do end up owning you, not the other way around. Become a person of minimal needs and you will be much more content.Develop an endless curiosity about this world.Become an explorer and view the world as your jungle.

and the more north you get its more likely to get a sight of the aurora lights ;) by mrperrific Oct 5

Fantastic, thank you! I may be tempted to take a trip up the coast and see if I can find somewhere I can wrap up warm and see a sky this beautiful! by mattwilson Oct 5

but beware its expencive here, but i swear it will be worth it! make your journey along the coast, or by train, you´ll get fairly cheap tickets if you buy some days in advance by mrperrific Oct 4

I will have to grab my little camera and see what I can find in Norway then! by mattwilson Oct 3

you can do it where the photografer comes from, norway :P by mrperrific Oct 3

It is amazing how powerfully beautiful nuature and how all the atoms and molecules can line up to create something so wonderful! Impressive. I'd love to go to somewhere you can see the sky so clearly! by mattwilson Oct 3