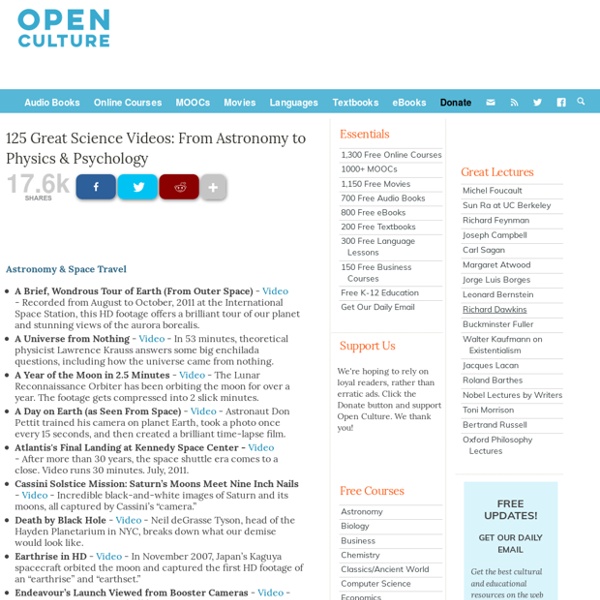 Astronomy & Space Travel A Brief, Wondrous Tour of Earth (From Outer Space) - Video - Recorded from August to October, 2011 at the International Space Station, this HD footage offers a brilliant tour of our planet and stunning views of the aurora borealis.A Universe from Nothing - Video - In 53 minutes, theoretical physicist Lawrence Krauss answers some big enchilada questions, including how the universe came from nothing.A Year of the Moon in 2.5 Minutes - Video - The Lunar Reconnaissance Orbiter has been orbiting the moon for over a year. The footage gets compressed into 2 slick minutes.A Day on Earth (as Seen From Space) - Video - Astronaut Don Pettit trained his camera on planet Earth, took a photo once every 15 seconds, and then created a brilliant time-lapse film.Atlantis's Final Landing at Kennedy Space Center - Video - After more than 30 years, the space shuttle era comes to a close. Video runs 30 minutes. Physics Biology & Chemistry Environment, Geology and & Ecology

An Introduction to Photoshop Compositing for Beginners - Digital Photography School by Sarah Hipwell What is compositing? Simply, it means to combine two or more images to make a single picture. 300+ Mind Expanding Documentaries I watch a lot of documentaries. I think they are incredible tools for learning and increasing our awareness of important issues. The power of an interesting documentary is that it can open our minds to new possibilities and deepen our understanding of the world. On this list of mind expanding documentaries you will find different viewpoints, controversial opinions and even contradictory ideas. Critical thinking is recommended. I’m not a big fan of conspiracy documentaries but I do like films that challenge consensus reality and provoke us to question the everyday ideas, opinions and practices we usually take for granted.

The Franklin Institute's Resources for Science Learning This presentation of The Franklin Institute's Case Files highlights individuals from the history of science and technology. It is one of many Resources for Science Learning. Each thematic group of Files presented at left begins with commentary from a distinguished historian of the discipline. Introduction to the Photoshop Toolbar (Part 1) In this article (Part 1 of 3) I will give you a quick introduction to the Photoshop CS5 toolbar. The toolbar is a floating panel normally placed at the left of the screen. View Other Articles in This Series

Heidegger: Thinking the Unthinkable German philosopher Martin Heidegger addressed the central question of human existence full on, by examining how human self-awareness depends on concepts of time and death. His preoccupation with ontology - the form of metaphysical inquiry concerned with the study of existence itself - dominated his work. The central idea of his complex Sein und Zeit (Being and Time) (1927) could be summed up in the phrase 'being is'. Man had to ask himself 'what is it to be?' and only by doing this, and standing back from absorption into objects and other distractions, could he actually exist. For Heidegger, the constant fear of death and the anxieties of life helped man to ask this central question – the mystery of life was intimately linked to the individual's confrontation and consideration of the temporary nature of their own existence.

The Field Book Project What is a field book? Field books or field notes are primary source documents that describe the events leading up to and including the collection of specimens or observations during field research. Field notes can take many forms depending on the information needs of the collector. Importance and challenges of field books Field notes are significant sources of information related to scientific discovery. They provide rich data for researchers to understand how biodiversity has changed over time and space.

Study suggests humans are only capable of having five people in their closest circle (Phys.org)—A trio of researchers affiliated with the University of Oxford in England and Aalto University School of Science in Finland has conducted a study of human behavior and has found evidence backing up a prior theory that suggests humans have different layers that make up their social circle with different numbers of people in them. In their paper uploaded to the preprint server, arXiv, they describe their study which involved analyzing cell phone records to count calls, what they found and that they believe it means for us a group. One of the researchers, Robin Dunbar, was part of a team that back in the 1990's studied the correlation between brain size in primates and the number of individuals in their social groups. They found that the bigger the brain, the more members of their groups. More recently, he and colleagues have conducted some experiments that suggest that humans have layers or groups of contacts, with the closet layers having fewer people, and the farthest, more.

Evernote Description Evernote for iPhone, iPad, and Apple Watch is the modern workspace that syncs between all of your devices. Work everywhere and stay productive:• Write notes, checklists, and research• Organize web articles, docs, and photos • Discuss your work with others, right within the app• Present ideas without creating a slide deck Suppressed Technology 'Lost Lightning: The Missing Secrets of Nikola Tesla' - Full Film Home | About Us | Contact | Subscribe 'Lost Lightning: The Missing Secrets ofNikola Tesla' - Full Film Phenomenon: The Lost Archives We Sting U ForbiddenKnowledgeTV Alexandra Bruce August 6, 2013 This is a seldom-seen and excellent documentary about Nikola Tesla produced in 1998.

Frostbite Theater Welcome to Frostbite Theater, a collection of science videos produced by Jefferson Lab! Liquid Nitrogen Experiments Have you ever wanted to play with liquid nitrogen, but didn't happen to have any lying around the house? What Is Nothing? A Mind-Bending Debate about the Universe Moderated by Neil deGrasse Tyson by Maria Popova “You can’t assert an answer just because it’s not something else.” Isaac Asimov — sage of science, champion of creativity in education, visionary of the future, lover of libraries, Muppet friend — endures as one of the most visionary scientific minds in modern history.