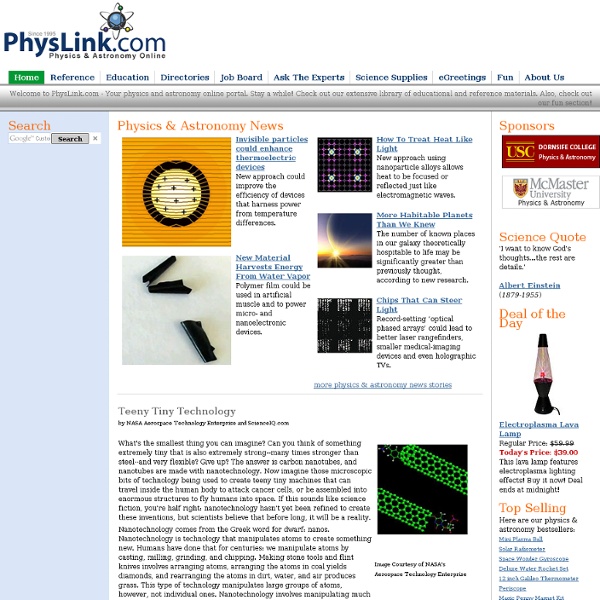 125 Great Science Videos: From Astronomy to Physics & Psychology Astronomy & Space Travel A Brief, Wondrous Tour of Earth (From Outer Space) - Video - Recorded from August to October, 2011 at the International Space Station, this HD footage offers a brilliant tour of our planet and stunning views of the aurora borealis.A Universe from Nothing - Video - In 53 minutes, theoretical physicist Lawrence Krauss answers some big enchilada questions, including how the universe came from nothing.A Year of the Moon in 2.5 Minutes - Video - The Lunar Reconnaissance Orbiter has been orbiting the moon for over a year. The footage gets compressed into 2 slick minutes.A Day on Earth (as Seen From Space) - Video - Astronaut Don Pettit trained his camera on planet Earth, took a photo once every 15 seconds, and then created a brilliant time-lapse film.Atlantis's Final Landing at Kennedy Space Center - Video - After more than 30 years, the space shuttle era comes to a close. Physics Biology & Chemistry Environment, Geology and & Ecology Psychology & Neuroscience

High School Physics and AP Physics Online Pysics is Phun! Enter the wild world of physics where appearances and logic are often turned upside down. Understanding the underlying concepts is essential for uncovering the magic of physics. It can be a thrilling adventure for students as they discover lots of cool methods for lasting knowledge. Amusement Park Physics Plan a virtual field trip to Amusement Park Physics sponsored by the Annenberg Foundation. ExploreLearning Over 400 math and science Gizmos populate this subscription based Website. Fear of Physics Animated demonstrations and virtual activities will engage students in critical thinking about the how and why of physics. Ippex Online Students will enjoy these virtual learning modules on matter, electricity and magnetism, energy, and fusion. Java Applets on Physics: Walter Fendt Walter Fendt has created a fabulous set of Java applets that may be used by educators. Little Shop of Physics NSTA Learning Center Physclips The Physics Classroom Physics of Sport Physics World Teaching Resources

Practical Physics This website is for teachers of physics in schools and colleges. It is a collection of experiments that demonstrate a wide range of physical concepts and processes. Some of the experiments can be used as starting-points for investigations or for enhancement activities. Physics is a practical science. Good quality, appropriate physics experiments and investigations are the key to enhanced learning, and clarification and consolidation of theory. We have published a new set of resources to support the teaching of practical science for Key Stages 3-5. Jazz - A Film by Ken Burns by Pbs (Direct), Ken Burns | 841887051255 | DVD ...And That's What Jazz Music Is I've always wanted to take a systematic look at Jazz and, accordingly, dutifully watched all 18 hours of Ken Burns's documentary. I don't feel that my investment of time was well-served, and I even feel that my good faith as a viewer was abused by those with an agenda to serve. Was this review helpful?

Smile Into Your Organs: “A smile is an inexpensive way to improve your looks” Charles Gordy I love the idea that smiling is used as a healing and meditation practice by many ancient cultures. Taoists believe that holding a smile on your face and directing it inwards towards your organs and inner body, is the key to good health and longevity. Traditional Balinese healers know that a smile washes away bad energy and recommend smiling meditation as a simple way to calm the mind and bring health to the soul. The inspirational Thich Nhat Hanh has always encouraged us to smile as part of our daily practice for a more peaceful world, and as an essential ingredient in any walking meditation. Photo by stuck in customs: How to smile on the inside: I was first introduced to the Taoist exercise called the “inner smile” about 15 years ago. Each week we were guided to smile on our face, really feel the smiling energy and then imagine ( in our minds eye ) sending the smiling energy into each of our organs. .

Online Library - download and read ebooks for free Higher Density Blog In5D.com. By now, pretty much all of us know and accept that meditation provides a plethora of benefits, including reduced tension and stress and improved focus and concentration. However, how and why meditation does this has long remained unknown—until now! Harvard University scientists have published the results of an 8-week study that used magnetic resonance imaging (MRI) to examine the effects of meditation on the brain. MRIs were taken at the beginning and end of the 8-week study. We know what you’re thinking: what is this mysterious gray matter that meditation is rebuilding? Research on the brain has shown that the amount and density of gray matter differs from individual to individual, and can determine or signify certain traits or talents. The Harvard study found that meditation can increase the density of the gray matter in the hippocampus, specifically. -The Alternative Daily Found at:

Free PDF eBooks DNA molecules can 'teleport', Nobel Prize winner claims A Nobel Prize winning biologist has ignited controversy after publishing details of an experiment in which a fragment of DNA appeared to ‘teleport’ or imprint itself between test tubes. According to a team headed by Luc Montagnier, previously known for his work on HIV and AIDS, two test tubes, one of which contained a tiny piece of bacterial DNA, the other pure water, were surrounded by a weak electromagnetic field of 7Hz. Eighteen hours later, after DNA amplification using a polymerase chain reaction, as if by magic the DNA was detectable in the test tube containing pure water. Oddly, the original DNA sample had to be diluted many times over for the experiment to work, which might explain why the phenomenon has not been detected before, assuming that this is what has happened. The phenomenon might be very loosely described as 'teleportation' except that the bases project or imprint themselves across space rather than simply moving from one place to another. What does all of this mean?

OnRead.com - instant free e-book download. Read books online via this free e-book library. Become a literary critic and write your own review to any book. The Effect of External Energies in Your Space By Caroline Diana Bobart From an intuitive standpoint, your aura or personal space is separated from the outer world by a permeable membrane of external energies. This turns you into a multi-dimensional, etheric telephone exchange of sorts! For better or for worse, you are constantly receiving and transmitting spoken and unspoken communication with the world around you through the medium of energy. This, in turn, registers upon your sensations, feelings, and thoughts. Most people are generally unaware of the inherent nature of their auras. The effect of these ongoing, for lack of a better word, conversations on your heart and mind/body system, sense of self, self-assuredness, and self-esteem are closely related to your current level of alignment with your most authentic self. When you respond to life from a still place of inner knowing and wisdom, you tend to instinctively engage more of the situations and relationships that honor your deepest needs and truth.

Download or Read Online - Free Books from Classicly. How to Stop Absorbing Other People’s Emotions Emotions such as fear, anger, frustration, and immobility are energies. And you can potentially ‘catch’ these energies from people without realizing it. If you tend to be an emotional sponge, it’s vital to know how to avoid taking on an individual’s negative emotions, or even how to deflect the free-floating negativities in crowds. Another twist is that chronic anxiety, depression, or stress can turn you into an emotional sponge by wearing down your defenses. Suddenly, you become hyper-attuned to others, especially suffering with similar pain. That’s how empathy works; we zero in on hot-button issues that are unresolved in ourselves. From an energetic standpoint, negative emotions can originate from several sources: what you’re feeling may be your own; it may be someone else’s; or it may be a combination. Stop Absorbing Other People’s Emotions 1. People call you “hyper-sensitive”, “overly sensitive”, etc., and they don’t mean it as a compliment! 2. 3. 4. 5. 6. 7. 8. 9. About the Author