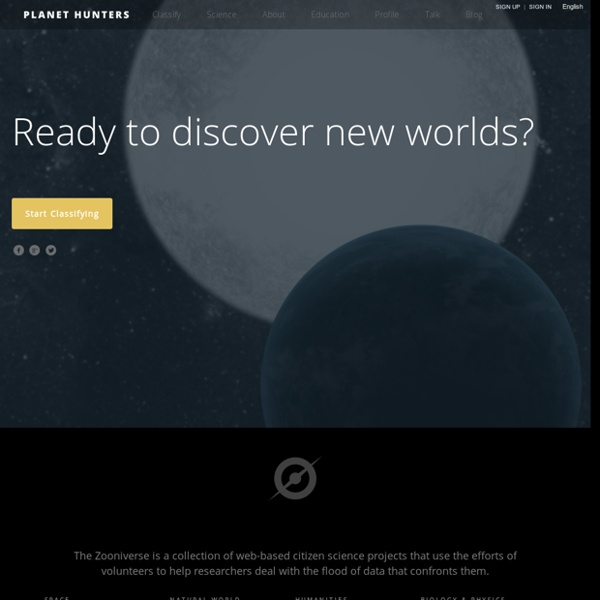 We find new planets by looking at how the brightness of a star changes over time As the planet passes in front of the star we see a dip in the light from it. Depending on how far the planet is from the star, you may see one or many dips in the lightcurve Can you spot the transits? Click the plus button and drag the box to mark them or just draw a box over the points Did you spot them?

Konstantin Tsiolkovsky Intro BiographyTsiolkovsky, Konstantin Eduardovich (1857-1935). Konstantin E. Tsiolkovsky State Museum of the History of Cosmonautics Russian physicist and school teacher, regarded as the founder of modern rocket theory. Crowdsourcing Crowdsourcing is a sourcing model in which individuals or organizations obtain goods and services. These services include ideas and finances, from a large, relatively open and often rapidly-evolving group of internet users; it divides work between participants to achieve a cumulative result. The word crowdsourcing itself is a portmanteau of crowd and outsourcing, and was coined in 2005.[1][2][3][4] As a mode of sourcing, crowdsourcing existed prior to the digital age (i.e. "offline").[5]

No. 41 - 2011: You Can Participate in Astronomy Research Projects You Can Participate in Astronomy Research Projects Finding Exoplanets: The graph in this illustration shows how the light we see from a star decreases slightly when one of its planets crosses the star’s disk. Planet hunters sometimes use this transit technique to find exoplanets. Art by Karen Teramura. You don't have to be a professional astronomer, or even own a telescope, to participate in a myriad of astronomy research projects. These days, a computer and an Internet connection are all you need.

Elementary Lesson Plan about the Solar System A Study of the Size and Scale of the Sun and Planets This lesson for late elementary students (grades 3 - 5) teaches about Earth and Space science using an inquiry approach. It covers objects in the sky and changes in the earth and sky, as students learn the size of each planet, the vastness of space, and some special features of our solar system. The Elegant Universe: Series ... The Elegant Universe: Part 3 PBS Airdate: November 4, 2003 NARRATOR: Now, on NOVA, take a thrill ride into a world stranger than science fiction, where you play the game by breaking some rules, where a new view of the universe pushes you beyond the limits of your wildest imagination. This is the world of "string theory," a way of describing every force and all matter from an atom to earth, to the end of the galaxies—from the birth of time to its final tick, in a single theory, a "Theory of Everything." Our guide to this brave new world is Brian Greene, the bestselling author and physicist.

Microwork Microwork is a series of small tasks which together comprise a large unified project, and are completed by many people over the Internet. [1] [2] Microwork is considered the smallest unit of work in a virtual assembly line. [3] It is most often used to describe tasks for which no efficient algorithm has been devised, and require human intelligence to complete reliably. The term was developed in 2008 by Leila Chirayath Janah of Samasource. [4] [5] Microtasking[edit] Microtasking is the process of splitting a job into its component microwork and distributing this work over the Internet. 'Zombie' stars key to measuring dark energy "Zombie" stars that explode like bombs as they die, only to revive by sucking matter out of other stars. According to an astrophysicist at UC Santa Barbara, this isn't the plot for the latest 3D blockbuster movie. Instead, it's something that happens every day in the universe - something that can be used to measure dark energy. This special category of stars, known as Type Ia supernovae, help to probe the mystery of dark energy, which scientists believe is related to the expansion of the universe.

Sky Map for Android What is Sky Map? Google Sky Map turns your Android-powered mobile phone into a window on the night sky. It will identify objects that appear in the sky and allow users to search for them. How can I get Sky Map? The app is available for download at the Google Play. Where is Sky Map be available? Birth of the Moon Posted by admin on Saturday, February 11, 2012 · The latest episode of Cosmic Journeys, enjoy in full HD 1080p. Scientists have been reconstructing the history of the moon by scouring its surface, mapping its mountains and craters, and probing its interior. What are they learning about our own planet’s beginnings? Decades ago, we sent astronauts to the moon as a symbol of confidence in the face of the great cold war struggle. Landing on the moon was a giant leap for mankind.

Solver Develops Solution to Help Clean Up Remaining Oil From the 1989 Exxon Valdez Disaster Boston, MA and Cordova, AK - November 7, 2007 - InnoCentive, the leader in prize-based Open Innovation sourcing, is helping to make a positive impact on Environmental Conservation by working with the Oil Spill Recovery Institute (OSRI) and other conservation groups. OSRI has posted 3 Challenges on the InnoCentive website, all dealing with oil spill recovery issues. The first of these challenges was solved last week by an oil industry outsider who used his expertise in the concrete industry to come up with the winning solution. John Davis, an InnoCentive Solver from the Central United States, was awarded $20,000 for his creative solution. Integral challenges physics beyond Einstein ESA's Integral gamma-ray observatory has provided results that will dramatically affect the search for physics beyond Einstein. It has shown that any underlying quantum 'graininess' of space must be at much smaller scales than previously predicted. Einstein's General Theory of Relativity describes the properties of gravity and assumes that space is a smooth, continuous fabric. Yet quantum theory suggests that space should be grainy at the smallest scales, like sand on a beach.

Sky Map Sky Map is a hand-held planetarium for your Android device. Use it to identify stars, planets, nebulae and more. Originally developed as Google Sky Map, it has now been donated and open sourced. Troubleshooting/FAQThe Map doesn't move/points in the wrong placeMake sure you haven't switched into manual mode.