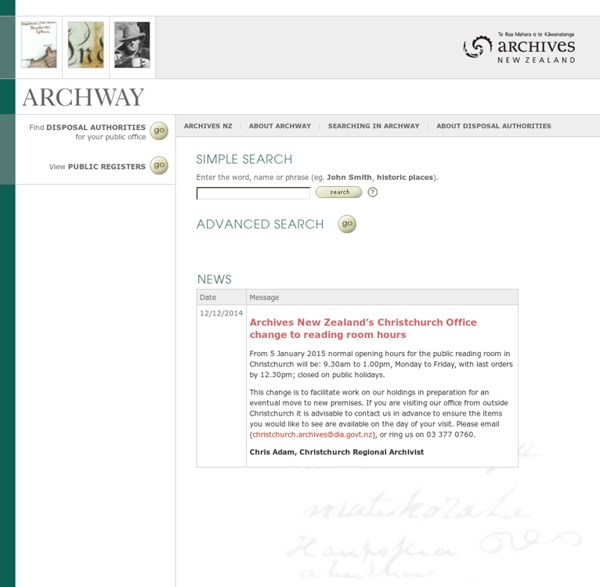 Te Ara - New Zealand Origins The First World War was caused by the destabilisation of the balance of power in Europe due to the rise of Germany. The war began in 1914 when Austria-Hungary invaded Serbia because of the assassination of an archduke. Countries had made alliances with each other, and soon most of Europe was at war. First War War Poetry The First World War Poetry Digital Archive is an online repository of over 7000 items of text, images, audio, and video for teaching, learning, and research. The heart of the archive consists of collections of highly valued primary material from major poets of the period, including Wilfred Owen, Isaac Rosenberg, Robert Graves, Vera Brittain, and Edward Thomas. This is supplemented by a comprehensive range of multimedia artefacts from the Imperial War Museum, a separate archive of over 6,500 items contributed by the general public, and a set of specially developed educational resources. These educational resources include an exciting new exhibition in the three-dimensional virtual world Second Life. Freely available to the public as well as the educational community, the First World War Poetry Digital Archive is a significant resource for studying the First World War and the literature it inspired.

Stretcher Bearers Advancing troops were not allowed to stop and care for wounded soldiers. All men carried an emergency field-dressing and if possible attempted to treat their own wounds. The wounded soldier then had to wait until the stretcher-bearers arrived. The Gallipoli campaign - The Gallipoli campaign Each year on Anzac Day, New Zealanders (and Australians) mark the anniversary of the Gallipoli landings of 25 April 1915. On that day, thousands of young men, far from their homes, stormed the beaches on the Gallipoli Peninsula in what is now Turkey. For eight long months, New Zealand troops, alongside those from Australia, Great Britain and Ireland, France, India, and Newfoundland battled harsh conditions and Ottoman forces desperately fighting to protect their homeland.

Digital Collection - NZ You are here: Home > Digital Collection > Wars & conflict Heritage Digital Collection Home The Canterbury Aviation (N.Z.) War Nurse Plot[edit] During World War I, a small diverse group of young American women leave for France to answer the urgent need for nurses, despite having little or no experience. Under the leadership of socialite Mrs.

WW100 New Zealand A selection of sites and sources for learning about the history of the First World War from a New Zealand perspective, and the role your family members might have played in it. Soldiers inside the YMCA library in Beauvois, France. Ref: 1/2-013635-G. Courtesy of Alexander Turnbull Library, Wellington, New Zealand. Anzac Day Collection This documentary gave NZ viewers, for the first time, a Turkish view of the Gallipoli story. Produced for TVNZ and Turkish TV, it focuses on four young people, two Turks and two New Zealanders, descended from Gallipoli veterans, as they explore the grim reality of their ancestors’ experience. Six Māori Battalion soldiers camped in Italian ruins wait for night to fall. In the silence the bros-in-arms distract themselves with jokes before a tohu (sign) brings them back to reality. Directed by Oscar-nominated Taika Waititi it won international acclaim: honourable mention at Sundance and a special jury prize at Berlin. The story of the New Zealand Army's (28th) Māori Battalion, this Tainui Stephens documentary tells the stories of five men who served with the unit.

Recreating Gallipoli in Minecraft As part of our centenary education programme, Auckland Museum is making use of the popular Minecraft® game to engage students with the events that occurred at Gallipoli in 1915. Minecraft® is an award-winning game that encourages creativity and adventure. It allows game players to break and place blocks working together to create virtual structures, landscapes, and worlds.