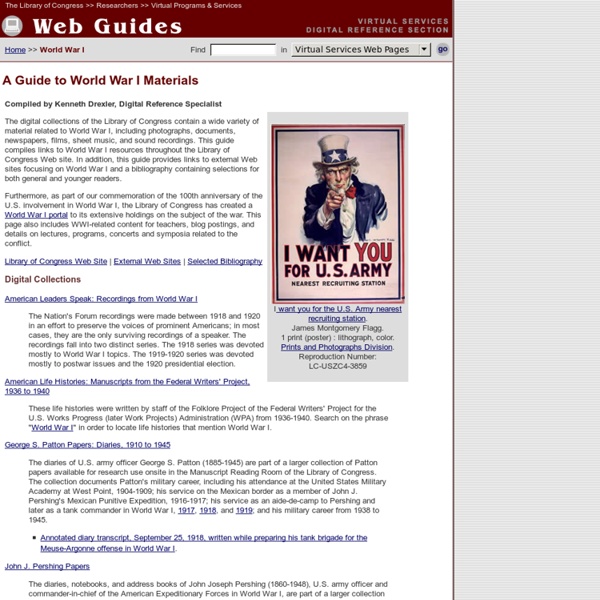 Compiled by Kenneth Drexler, Digital Reference Specialist The digital collections of the Library of Congress contain a wide variety of material related to World War I, including photographs, documents, newspapers, films, sheet music, and sound recordings. This guide compiles links to World War I resources throughout the Library of Congress Web site. In addition, this guide provides links to external Web sites focusing on World War I and a bibliography containing selections for both general and younger readers. Furthermore, as part of our commemoration of the 100th anniversary of the U.S. involvement in World War I, the Library of Congress has created a World War I portal to its extensive holdings on the subject of the war. This page also includes WWI-related content for teachers, blog postings, and details on lectures, programs, concerts and symposia related to the conflict. Library of Congress Web Site | External Web Sites | Selected Bibliography George S. John J. Patriotic Melodies Related:  World War One

Anzac Day Collection This documentary gave NZ viewers, for the first time, a Turkish view of the Gallipoli story. Produced for TVNZ and Turkish TV, it focuses on four young people, two Turks and two New Zealanders, descended from Gallipoli veterans, as they explore the grim reality of their ancestors’ experience. Six Māori Battalion soldiers camped in Italian ruins wait for night to fall. In the silence the bros-in-arms distract themselves with jokes before a tohu (sign) brings them back to reality. The story of the New Zealand Army's (28th) Māori Battalion, this Tainui Stephens documentary tells the stories of five men who served with the unit. This seminal 1984 documentary tells the stories of the New Zealand soldiers who were part of the identity-defining Gallipoli campaign in World War I. Actor Wi Kuki Kaa plays a Vietnam War veteran who is dislocated by his war experience and homeless. A live broadcast (for TV One) of the Anzac Day dawn service at Waikumete Cemetery.

Teaching European History With Star Trek | Milk and Cookies This post is the 2nd in a series written by my guest, Susan. Read part one: Teaching Ancient History With Star Trek. To Boldly Go…Into European History Of the three episodes that lend themselves well to approaching events in European history, two are among my very favorites. The first of these is “Wolf in the Fold”, which sets the story of Jack the Ripper on another planet. The other is “Patterns of Force,” which describes another just as fearful time, the reign of Nazi Germany. All Our Yesterdays Summary: Kirk, Spock, and McCoy are sent back in time. When to Watch: When studying 17th Century Witch Trials in Europe or America Vocabulary HenchmanAccomplice Questions and Activities The man called Kirk a slave. Wolf in the Fold Note for Parents: Just like the topic itself, this episode is not suitable for young children. Summary: Scotty is accused of multiples murders. When to Watch: When studying 1880′s England. HedonisticExpediteRegressive Trivia: Patterns of Force Subcutaneous

The First World War in France (British Library) The French public yearned for revenge after the defeat of 1870, and for the return of the parts of Alsace and Lorraine lost to Germany. There were international rivalries over colonies, naval power and empires in Europe. France had allied itself to Russia, and after the mobilisation of Russia on 30 July 1914, France also mobilised, on 1 August. Explore 500 historical sources from across Europe, with new insights by experts on our World War One website Crowds enthusiastically called for war in Berlin and Paris, and Germany invaded Belgium on 3 August. Maurice Barrès, La Lorraine dévastée. Verdun 1916 was the bloodiest battle, and French troops also fought in Gallipoli, in Turkey and Salonica, Northern Greece. La Bourguignotte. In 1922 the British Museum published the Subject index of the books relating to the European War, 1914-1918, acquired by the British Museum, 1914-1920. French Section The British Library 96 Euston Road London NW1 2DB United Kingdom

Castle Architecture Although castle architecture developed over the centuries in line with weapons technology, the principles remained much the same. A good castle provided a secure base that could be easily defended. It needed defenses against frontal attack (thick, high walls and secure entry gates) and from undermining (rock foundations or a moat). It furnished means of repelling attackers while minimising exposure of the defenders (arrow loops, crenellation, machicolations, murder holes). Further, it needed facilities to withstand a siege - a fresh water supply or large cistern and vast supplies of food. A good castle had no dead-spaces - ie external areas that defenders could not fire on, but did provide multiple locations from which vulnerable points could be defended. The best castles provided rings of defence so that defenders could hold out from a citadel even if the outer defences failed. Castles also needed facilities for a garison and living quarters.

World War I Document Archive Internet History Sourcebooks Update Information 2006: In 2006 the Internet Medieval Sourcebooks and associated sourcebooks are undergoing a major overhaul to remove bad links and add more documents. 1. This project is both very large and fairly old in Internet terms. 2. 3. The Internet Medieval Sourcebook is organized as three main index pages, with a number of supplementary documents. INTRODUCTION: MEDIEVAL SOURCES ON THE INTERNET Historians teaching medieval history surveys almost always want to combine a textbook, a sourcebook, and additional readings. GOAL: The goal here then has been to construct an Internet Medieval Sourcebook from available public domain and copy-permitted texts. DOCUMENT SIZE: The size of documents for teaching purposes is an issue. TEXTS Since these texts come from a variety of printed materials, translators, and sources, they will vary in quality. USAGE: This Sourcebook is specifically designed for teachers to use in teaching. By pointing students to this web site. Patrick J.

European stories & official histories Changing Times Welcome to the Changing Times section - one thousand years at the press of a button with lots of pictures! Please select an option from the ones below to discover the 15 themes within each section. Click on the timeline to find out dates and which king or queen was on the throne from Norman times to the present day. Related worksheets: Normans (PDF 137 KB) Medieval (PDF 140 KB) Tudors (PDF 140 KB) Stuarts (PDF 139 KB) Georgians (PDF 140 KB) Victorians (PDF 142 KB) Twentieth Century (PDF 143 KB)