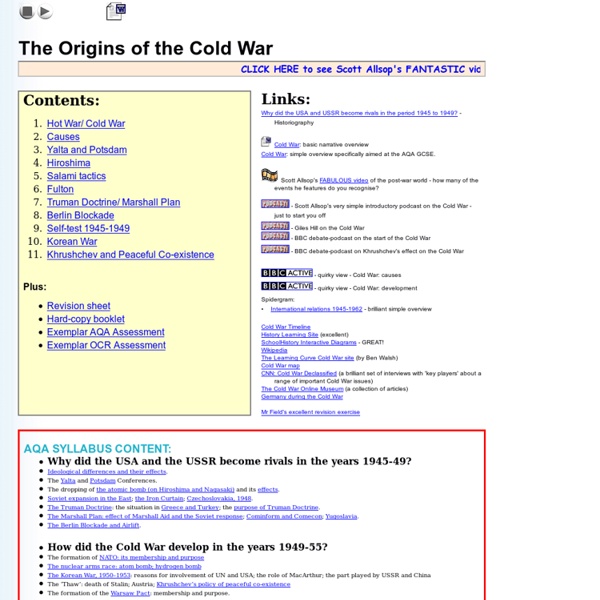 FOUR causes of the Cold War [BARE]. NINE events which caused the Cold War. FOUR decisions made at the Yalta Conference.

The Cold War As of July 1, 2013 ThinkQuest has been discontinued. We would like to thank everyone for being a part of the ThinkQuest global community: Students - For your limitless creativity and innovation, which inspires us all. Teachers - For your passion in guiding students on their quest. Partners - For your unwavering support and evangelism. Parents - For supporting the use of technology not only as an instrument of learning, but as a means of creating knowledge. We encourage everyone to continue to “Think, Create and Collaborate,” unleashing the power of technology to teach, share, and inspire. Best wishes, The Oracle Education Foundation

How the Cold War Developed 1949-63 How peaceful was Peaceful Coexistence? Hungary, 1956: causes of the rising, why it was a threat to the USSR and how the soviets dealt with it; the effects on Europe and the Cold War The continuation of the nuclear arms/space race: Sputnik 1; ICBMs; Polaris; Gagarin; Apollo The U2 Crisis 1960: the purpose of U2; the responses of the USA and the USSR to the crisis; the effect on the Paris Summit and the peace process The situation in Berlin: the Berlin Wall; Kennedy’s response. How close to war was the world in the 1960s?

A Secret Landscape: The Cold War Infrastructure of the Nation's Capital Region Road to World War II International relations 1919-39: basic narrative overview Peace to War 1919-39: clear overview aimed specifically at the old AQA GCSE. Podcasts: - Giles Hill on the Road to War - BBC debate-podcast on what caused the war - quirky view History Learning Site - excellent IGCSE notes: an exemplar set of student notes The BBC Causes of World War II site An excellent site on 'Why World War II?' A good set of notes, suitable for top-GCSE/A-level, which address long- and short-term causes and give a brief historiography. A site studying the theories of AJP Taylor about why there was a war Cartoonists and the idea of a Stufenplan - Did Hitler have a plan for war? A site about 1938 - including many radio broadcasts

10 Ridiculous Cold War Government Projects Politics The Cold War was a period of time when all of the countries of the world waited with baited breath to see what the outcome of the decades-long hard staring contest between the United States and the Soviet Union would be. As the nuclear arms race ramped up, some of these countries (either voluntarily or otherwise) picked sides; some began developing nuclear programs of their own, and most just kept their heads down and quietly hoped for another day without complete annihilation. Most are aware of some of the truly shady things done by intelligence agencies and military organizations during this period, but the sheer scope of programs designed to figure out the capabilities of and/or screw with the other guy—and the ridiculous amounts of money and effort involved—is staggering. Before the development of the Intercontinental Ballistic Missile and the real threat of total nuclear destruction, people projected their Atomic fears onto all kinds of weird things. Col. Body.

Causes of WWI - Contents The Causes of World War One - Views of historians BBC News magazine - Who started WWI Blackadder on the causes of World War One - BBC debate-podcast on why war broke out - Giles Hill on the causes of the First World War - quirky view Map of Europe in 1914 Good notes + activities: recommended More notes Brilliant overview from wikipedia Reed Brett on the Causes of the War Prof Rempel on the Causes Interactive lesson - really good once you think you have got the basic idea BBC site - by Gary Sheffield Blackadder on the Causes of World War One - can you understand the humour? This site looks at the coming of war from Britain's point of view This thread on the History Help forum looks at how you can blame almost everyone and everyone for starting the war! Two essays, one arguing that militarism, the other that nationalism was to blame Nebojsa Malic argues simply and effectively that Serbia was not to blame, but that Austria and Germany wanted war.

The Unknown Cold War The modernizing of China and the dissolution of the Soviet Union over the last two decades have led to the release of hundreds of millions of pages of formerly top-secret archival documents. These documents—transnational cables, transcripts, diplomatic reports, and internal memoranda—are giving the West a new view of Sino-Soviet and inter-Soviet relations. They also hint at the dangers that might have been. Historians are collecting and translating provocative accounts of the Cuban Missile Crisis and other flash points in the Cold War. The Wilson Center and The George Washington University are partners in an ongoing NEH-supported collaboration to train high school teachers in recent advances in Cold War historiography and to build a website to store and display online resources. “Archives are a repository of a nation’s truths,” says Nancy Meyers, project associate at the Cold War International History Project. “Primary matter is hard for high school students to use.

World War II Home Front Study the topic through films! These four classic films will give you a great insight: Dunkirk Reach for the Sky The Cruel Sea The Longest Day Britain in World War II History Learning Site (excellent) A Chronology of the period with hyperlinks Spartacus encyclopaedia BBC site: excellent Maps of World War II campaigns (detailed) Battle of Britain site: excellent Hannah Hatfield's Spirit of Normandy prize-winning work on D-Day! The 'Home Front' The Imperial War Museum site is good on Civilians and has a very simple site on the Home Front Economic effects of the war Essays on the Home Front by Joanne Oliver and Laura Cleland - must-read pieces! Civvy Street in WWII (Tom Fletcher's memories) - wonderful account! Collected memories a. b. c. d. e. f. g. h. i. Memories on video - very accessible j. k. The Aycliffe Angels Chesham at War Brilliant BBC audio-clips from the war Problems on the Home Front A Socialist view of the war - argues that some sacrificed more than others to win the war The 1940s House

5 Things You Didn't Know: The Cold War The term “cold war” goes back to a 14th-century medieval writer named Don Juan Manuel, who referred to the uneasy peace between Muslims and Christians in Spain. But it was George Orwell, in a piece titled “You and the Atomic Bomb,” who applied the term as we know it best to the protracted economic, geopolitical and ideological battle between the United States, the Soviet Union and their shifting allies. The precise dates of the Cold War are the subject of debate, though most agree that it began at some point in the summer of 1945 and continued until the collapse of the Soviet Union at the end of 1991. Whatever the case, it dominated global politics and culture for the entire second half of the 20th century, and its effects are ongoing. To bring you up to speed, we present five things you didn’t know about the only war that categorically could have ended all wars through total and complete annihilation -- the Cold War. 2- It was predicted by Adolf Hitler Why is it Searched?

America5 3. Race Relations How far were the 1920s a time of racism and discrimination for Black Americans? Argument 1 - A time of racism [HACKLE]: a. d. c. b. e. f. Argument 2 - A time of flowering [RHINO]: a. b. c. d. e. 5 Ridiculous Cold War Myths You Learned in History Class The second half of the 20th century was dominated by the world's two remaining superpowers facing each other down. The rest of the world rallied behind one or the other as Soviet and American forces started in on spying and covert warring. There were good guys and bad guys, and it was all bullshit. For instance ... #5. It was the culmination of Kennedy's remarks in West Germany at one of the most volatile points in the Cold War. See, while Kennedy confidently delivered his kicker, "Ich bin ein Berliner" and prepared to drop the mic and walk offstage, the Germans were laughing their asses off. Wikipedia"This comedian is terrible. Why It's Bullshit: According to German professor Reinhold Aman in his epic volume Maledicta, "No intelligent native speaker of German tittered in Berlin when JFK spoke." Getty"I am neither delicious nor fattening" has a special word in 36 languages. The pedantic jack offs who still repeat this anecdote claim the use of the word "ein" is what screwed Kennedy. #4.