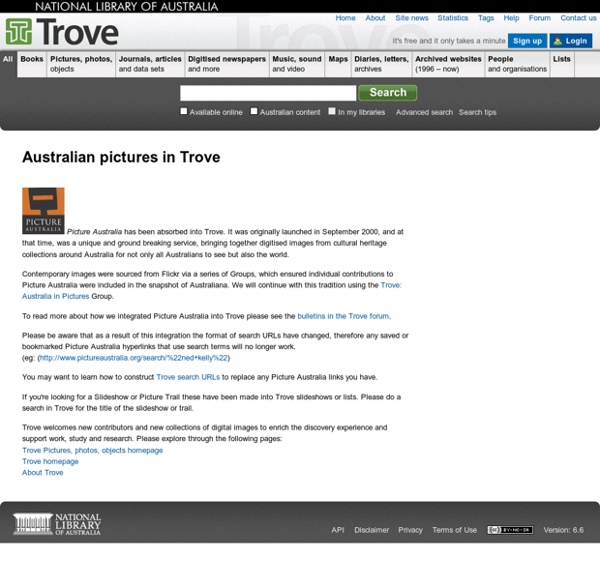 Picture Australia has been absorbed into Trove. It was originally launched in September 2000, and at that time, was a unique and ground breaking service, bringing together digitised images from cultural heritage collections around Australia for not only all Australians to see but also the world. Contemporary images were sourced from Flickr via a series of Groups, which ensured individual contributions to Picture Australia were included in the snapshot of Australiana. We will continue with this tradition using the Trove: Australia in Pictures Group. To read more about how we integrated Picture Australia into Trove please see the bulletins in the Trove forum. Please be aware that as a result of this integration the format of search URLs have changed, therefore any saved or bookmarked Picture Australia hyperlinks that use search terms will no longer work. You may want to learn how to construct Trove search URLs to replace any Picture Australia links you have.

Library of Congress Photos on Flickr (Prints and Photographs Reading Room, Library of Congress) View summary report (PDF - 128 kb) | View full report (PDF - 1.3 mb) Offering historical photograph collections through Flickr gives the Library of Congress a welcome opportunity to share some of our most popular images with a new visual community. We invite you to tag and comment on the photos, and we also welcome identifying information—many of these old photos came to us with scanty descriptions! To view the photos on Flickr, go to: You do not need a Flickr account to view the images; you would need to sign up for a free account to add comments or tags. We are offering sets of digitized photos: the 1,600 color images from the Farm Security Administration/Office of War Information, 1,500+ images from the George Grantham Bain News Service, selected panoramic photographs, portraits of jazz musicians and personalities by William P. We launched the pilot in January 2008. For more information:

NPPA: Best of Photojournalism 2011 First World War 1914–18 Australian troops in the Lone Pine trenches. A02022 A02022 Australian troops in the Lone Pine trenches. AWM A02022 Australia’s involvement in the First World War began when Britain and Germany went to war on 4 August 1914, and both Prime Minister Joseph Cook and Opposition Leader Andrew Fisher, who were in the midst of an election campaign, pledged full support for Britain. The outbreak of war was greeted in Australia, as in many other places, with great enthusiasm. The first significant Australian action of the war was the Australian Naval and Military Expeditionary Force’s (ANMEF) landing on Rabaul on 11 September 1914. On 25 April 1915 members of the Australian Imperial Force (AIF) landed on Gallipoli in Turkey with troops from New Zealand, Britain, and France. Throughout 1916 and 1917 losses on the Western Front were heavy and gains were small. For Australia, the First World War remains the costliest conflict in terms of deaths and casualties. Sources and further reading: C.E.W. J.

Service records Discovering Anzacs – The National Archives of Australia and Archives New Zealand commemorate the Centenary of Anzac. The National Archives holds records about service in the Australian defence forces from Federation in 1901. Find out how to access the records we hold relating to service with the: Australian Army (Army) Royal Australian Navy (RAN) Royal Australian Air Force (RAAF) We also hold other records relating to wartime service, including: civilian servicecourts-martial filesmerchant navymunitions workerssoldier settlementveterans’ case fileswar gratuities Under the Archives Act, you have a right of access to Commonwealth government records that are in the open access period. For wider research, you may also want to consult the Archives records about defence administration and policy or unit, operational and administrative records held by the Australian War Memorial. See also the list of abbreviations used in some service records.

New Zealand Travel Situated in the southwestern Pacific Ocean, New Zealand is mainly comprised of two main large islands - the North and South Islands, and one smaller island - Stewart Island, as well as numerous smaller islands including the Chatham Islands. New Zealand is known as Aotearoa meaning "Land of the long white cloud". New Zealand is a country dominated by towering peaks, long sandy beaches, exotic natural bush, sparkling lakes, and an extraordinary array of flora and fauna because of its isolation from the rest of the world. These values make New Zealand a haven for outdoor activities as well as a great place to unwind and take it all in. The New Zealander is also known as a "Kiwi" (named after the national bird). Each region of New Zealand is unique and quite different from each other in culture, landscape, and scenery. There are so many "must do" activities and experiences to try when traveling through New Zealand. Viewing New Zealand Travel photos 1 to 42 (of 62 on 2 pages)

Christchurch City Libraries Bibliofile Digitised WWI Victorian newspapers | State Library Victoria A major project commemorating World War I has digitised 216 WWI-era Victorian community newspapers and made them available online via the National Library of Australia’s Trove portal. Victorians everywhere can now explore the stories of their communities and family and friends who lived and fought through the Great War. This digitised collection contains thousands of stories waiting to be found. These newspapers of the day provide, in their original format, news and public debate; letters from soldiers, sailors and nurses; death notices, images and more. The newspapers can be freely and easily searched by anyone at anytime and anywhere, using keywords, dates or geographical regions. The digitised newspapers cover the period 1914–19. The digitisation of these newspapers has been supported by the State Library of Victoria, National Library of Australia, Public Libraries Victoria Network, local councils and historical societies.