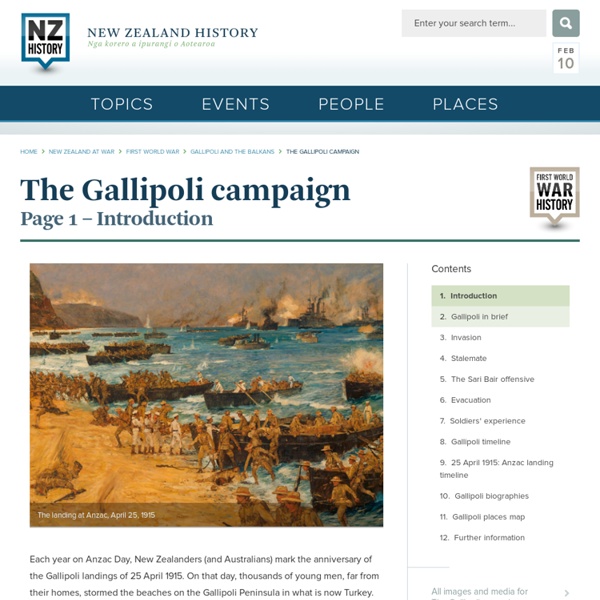 Each year on Anzac Day, New Zealanders (and Australians) mark the anniversary of the Gallipoli landings of 25 April 1915. On that day, thousands of young men, far from their homes, stormed the beaches on the Gallipoli Peninsula in what is now Turkey. For eight long months, New Zealand troops, alongside those from Australia, Great Britain and Ireland, France, India, and Newfoundland battled harsh conditions and Ottoman forces desperately fighting to protect their homeland. By the time the campaign ended, more than 130,000 men had died: at least 87,000 Ottoman soldiers and 44,000 Allied soldiers, including more than 8700 Australians. Among the dead were 2779 New Zealanders, about a fifth of all those who had landed on the peninsula. In the wider story of the First World War, the Gallipoli campaign made no large mark.

Related:  The changing significance of Gallipoli

National Library resources: Gallipoli Campaign Image: Anzac Cove, Gallipoli by State Library of South Australia on Flickr This year, 2015, is the 100 year anniversary since the landing of ANZAC troops on the beaches of Gallipoli, Turkey. Discover the history and what happened with the landing of the New Zealand and Australian troops. These resources have been selected to support this popular topic – Gallipoli SCIS 1674365 Stretcher Bearers Advancing troops were not allowed to stop and care for wounded soldiers. All men carried an emergency field-dressing and if possible attempted to treat their own wounds. The wounded soldier then had to wait until the stretcher-bearers arrived. There were only four stretcher-bearers per company and so it was often sometime before they received medical help. Some dragged themselves into a shell-hole for protection, but this was dangerous as many sank into the mud and drowned.

Battle of Gallipoli - World War I With World War I stalled on the Western Front by 1915, the Allied Powers were debating going on the offensive in another region of the conflict, rather than continuing with attacks in Belgium and France. Early that year, Russia’s Grand Duke Nicholas appealed to Britain for aid in confronting a Turkish invasion in the Caucasus. (The Ottoman Empire had entered World War I on the side of the Central Powers, Germany and Austria-Hungary, by November 1914.) In response, the Allies decided to launch a naval expedition to seize the Dardanelles Straits, a narrow passage connecting the Aegean Sea to the Sea of Marmara in northwestern Turkey. If successful, capture of the straits would allow the Allies to link up with the Russians in the Black Sea, where they could work together to knock Turkey out of the war.

Te Ara - New Zealand Origins The First World War was caused by the destabilisation of the balance of power in Europe due to the rise of Germany. The war began in 1914 when Austria-Hungary invaded Serbia because of the assassination of an archduke. Countries had made alliances with each other, and soon most of Europe was at war. New Zealand was part of the British Empire, and when Britain declared war on Germany, in August 1914, that meant New Zealand was at war too. The two sides were called the Central Powers (Germany, Austria-Hungary) and the Allies, which included the British Empire, Russia and France.

NZ on Screen - Gallipoli search results The World War I Collection Curated by NZ On Screen Team 2014 marks the centennial of the start of World War I. Over 100,000 New Zealanders served overseas in the 'Great War'. Great War nurses I have never regretted that I took the notion into my head to take on nursing, for it has opened up opportunities that I would never have had. Sister Jessie Tomlins More than 3,000 Australian civilian nurses volunteered for active service during the First World War. While enabling direct participation in the war effort, nursing also provided opportunities for independence and travel, sometimes with the hope of being closer to loved ones serving overseas. The Australian Army Nursing Service (AANS) had been formed in July 1903 as part of the Australian Army Medical Corps. During the war more than 2,000 of its members served overseas alongside Australian nurses working with other organisations, such as the Queen Alexandra's Imperial Military Nursing Service (QAIMNS), the Red Cross, or privately sponsored facilities.

How many New Zealanders served on Gallipoli? As the centenary of the First World War approaches, people are interested in how many Kiwis served in the various campaigns. For Gallipoli, the answer is not straightforward – and the waters have been muddied by a mistake by a senior British general that went unnoticed for nearly a century. Sir Ian Hamilton was a respected military thinker but not a great success as head of the Mediterranean Expeditionary Force (MEF), the cobbled-together Allied army which began landing on Turkey’s Gallipoli Peninsula on 25 April 1915. I’ve recently realised that Hamilton was also responsible for a significant underestimate of the number of men who served on Gallipoli in New Zealand units of the MEF. Sir Ian Standish Monteith Hamilton.

Archives New Zealand - Discover World War One NZDF Personnel Files Archives New Zealand holds the New Zealand Defence Force (NZDF) Personnel Files for all known New Zealanders who served in the First World War. Because the original files are restricted for preservation reasons, we have digitised the collection (over 140,000 individual records). These digital versions are open to view and download. The records contain information of interest to personal and professional researchers alike, such as a person’s movements, promotions or punishments, what medals they received, their health, and other biographical information. War Nurse Plot[edit] During World War I, a small diverse group of young American women leave for France to answer the urgent need for nurses, despite having little or no experience. Under the leadership of socialite Mrs. Townsend (Hopper), they turn an abandoned building into a hospital. They are soon joined by teenage blonde Joy Meadows (Page) (who later divulges to a patient she is "nearly nineteen").

History of Anzac Day Anzac Day 1916-22: The making of a holy day 25 April 1922 was a day of mourning throughout New Zealand. In cities and towns a sombre and almost surreal stillness reigned unlike any other day of the year. Government offices and banks, shops and factories, theatres and hotels were closed. Sportsgrounds remained deserted. A day dedicated to remembering the dead. WW100 New Zealand A selection of sites and sources for learning about the history of the First World War from a New Zealand perspective, and the role your family members might have played in it. Soldiers inside the YMCA library in Beauvois, France. Ref: 1/2-013635-G. Courtesy of Alexander Turnbull Library, Wellington, New Zealand. Starting Places

Returned and Services' Association (RSA) Anzac Day 1916-22: The making of a holy day 25 April 1922 was a day of mourning throughout New Zealand. In cities and towns a sombre and almost surreal stillness reigned unlike any other day of the year. Government offices and banks, shops and factories, theatres and hotels were closed. In the trenches of 1914-1918 What were the trenches? Although most of us think primarily of the Great War in terms of life and death in the trenches, only a relatively small proportion of the army actually served there. The trenches were the front lines, the most dangerous places. But behind them was a mass of supply lines, training establishments, stores, workshops, headquarters and all the other elements of the 1914-1918 system of war, in which the majority of troops were employed.