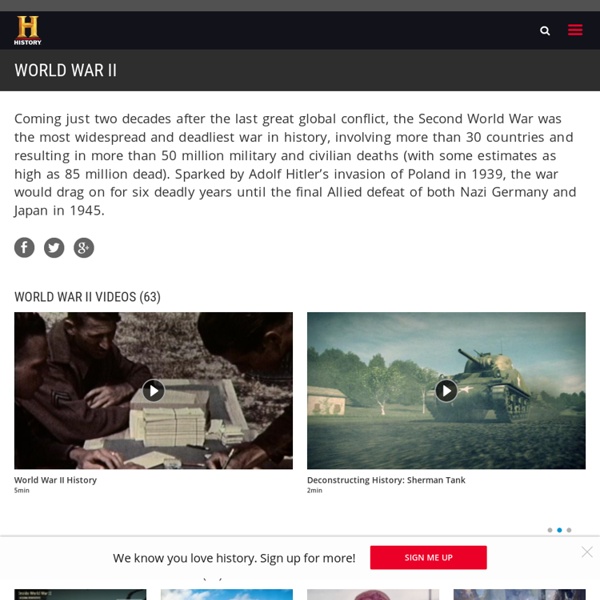 Coming just two decades after the last great global conflict, the Second World War was the most widespread and deadliest war in history, involving more than 30 countries and resulting in more than 50 million military and civilian deaths (with some estimates as high as 85 million dead). Sparked by Adolf Hitler’s invasion of Poland in 1939, the war would drag on for six deadly years until the final Allied defeat of both Nazi Germany and Japan in 1945.

Battles of the Second World War Battles Operations Elkton III Plan Operation Aerial, the evacuation from north western France, 15-25 June 2008 Operation Appease - the battle of Talasea, 6-11 March 1944 Operation Blissful - The Choiseul Raid, 27 October-4 November 1943 Operation Cartwheel - the Reduction of Rabaul (30 June 1943- January 1944) Operation Chariot, the St. Nazaire Raid, Part One Operation Chariot, the St. World War II for Kids: Causes of WW2 History >> World War 2 for Kids Please note: The audio information from the video is included in the text below. There were many events throughout the world that led to the beginning of World War 2. In many ways, World War 2 was a direct result of the turmoil left behind by World War 1. Below are some of the main causes of World War 2. Treaty of Versailles

Facts, Summary, Combatants, & Causes World War II, also called Second World War, conflict that involved virtually every part of the world during the years 1939–45. The principal belligerents were the Axis powers—Germany, Italy, and Japan—and the Allies—France, Great Britain, the United States, the Soviet Union, and, to a lesser extent, China. The war was in many respects a continuation, after an uneasy 20-year hiatus, of the disputes left unsettled by World War I. The 40,000,000–50,000,000 deaths incurred in World War II make it the bloodiest conflict, as well as the largest war, in history. Top Questions What was the cause of World War II?

World War II In North Africa, British and American forces had defeated the Italians and Germans by 1943. An Allied invasion of Sicily and Italy followed, and Mussolini’s government fell in July 1943, though Allied fighting against the Germans in Italy would continue until 1945. On World War II’s Eastern Front, a Soviet counteroffensive launched in November 1942 ended the bloody Battle of Stalingrad, which had seen some of the fiercest combat of the war. The approach of winter, along with dwindling food and medical supplies, spelled the end for German troops there, and the last of them surrendered on January 31, 1943. On June 6, 1944–celebrated as “D-Day”–the Allied began a massive invasion of Europe, landing 156,000 British, Canadian and American soldiers on the beaches of Normandy, France. In response, Hitler poured all the remaining strength of his army into Western Europe, ensuring Germany’s defeat in the east.

This Animated Data Visualization Of World War II Fatalities Is Shocking Peace on earth: a statement heard around the world and an ideal that most of seem to want to yet have no idea how to attain. It seems like conflicts and wars are a reality in every part of the world, every single day. From religious battles to political quarrels, we seem to find a way to make our differences and thirst for power and control lead us to battle time and time again. And while everything I’m saying is true, there’s probably something you haven’t considered that may shock you.

The Battle of Britain: a brilliant triumph that involved far more than just the chosen few At 4.30pm on 14 August 1940, 87 Squadron scrambled to their Hurricanes, quickly got airborne and started speeding towards Weymouth on the Dorset coast. “One hundred and twenty plus approaching Warmwell from the south,” came the calm voice of the ground controller in the pilots’ ears. “Good luck, chaps.” Pilot Officer Roland ‘Bee’ Beamont swallowed hard and began desperately to scan the sky. They were over Lyme Regis and flying at around 12,000ft when Beamont saw them, still out to sea – what looked to him like a gigantic swarm of bees all revolving around each other in a fantastical spiral from around 8,000 to 14,000ft. As the Hurricanes drew closer, Beamont could see there were about 50 Stuka dive-bombers and two-engine Messerschmitt 110s above, and single-engine Me109s above them.

Hell in the Pacific One of the most bitter battle arenas of the Second World War, Pearl Harbor represented the trigger that led America into the greatest conflict ever recorded and the eventual liberation of the people of Asia and the Pacific. On the 7th December 1941 Japan launched surprise attacks across the Pacific region, setting battleships ablaze in Pearl Harbor, then routing the British in Malaya and capturing Singapore itself: the greatest humiliation in British war history. The Japanese now seemed unstoppable and after being at war with China for a decade, and shocking the world with atrocities like the Nanking Massacre, they believed their destiny was to rule Asia under the Emperor, for them, a living god. Inferno - Dec, 7th 1941 and Japan launches attacks across the Pacific region, killing thousands in Pearl Harbor and capturing Singapore - a vicious and bloody battle ensues. Purgatory - The plight of those who fell into Japanese hands during WWII.

World War 2 facts for kids In September 1939, Britain entered into what would become the world’s most devastating war to date. Learn all about the events that changed the lives of millions in our World War 2 facts…. World War 2 facts 1. World War 2 was a battle between two groups of countries Famous People of World War Two Influential people who caused, influenced and fought during the Second World War. Adolf Hitler (1889 – 1945) Dictator of Nazi Germany from 1933-45. During the 1930s, Hitler sought to gain ‘lebensraum’ for Germany – claiming Austria, Czechoslovakia and finally invading Poland. Hitler’s initial success encouraged him to invade Russia, which ultimately would over-stretch his war-machine. Hitler’s regime also pursued the extermination of Jews and other ‘non-Aryan’ minorities in concentration camps across Europe.