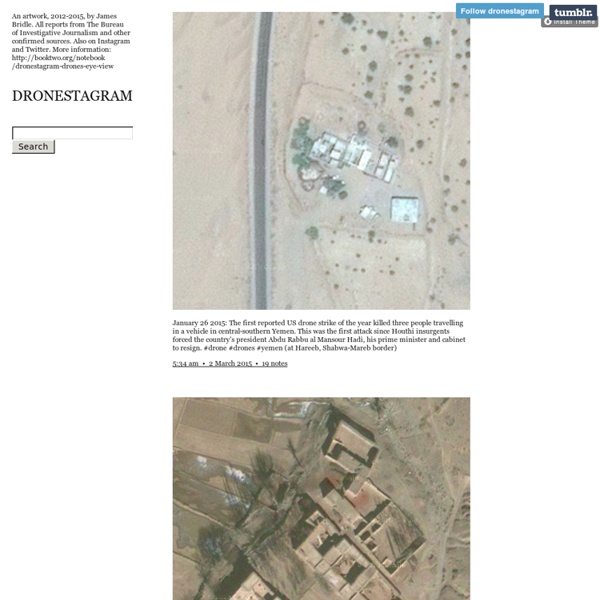 January 26 2015: The first reported US drone strike of the year killed three people travelling in a vehicle in central-southern Yemen. This was the first attack since Houthi insurgents forced the country’s president Abdu Rabbu al Mansour Hadi, his prime minister and cabinet to resign. #drone #drones #yemen (at Hareeb, Shabwa-Mareb border) 5:34 am • 2 March 2015 • 19 notes January 19 2015: CIA drones targeted a house in Shawal area of North Waziristan killing five, six or seven people. The identities of the dead was not immediately known however a senior Pakistani official said “non-Pakistani, foreign fighters” were among the dead and Taliban sources said the attack also killed local fighters associated with Taliban commander Hafiz Gul Bahadur. 5:33 am • 2 March 2015 • 16 notes January 15 2015: A second strike of the day killed 4-7 people according to anonymous Pakistani sources. 5:31 am • 2 March 2015 • 9 notes 5:30 am • 2 March 2015 • 12 notes 5:29 am • 2 March 2015 • 11 notes

Samy Kamkar - SkyJack: autonomous drone hacking SkyJack is a drone engineered to autonomously seek out, hack, and wirelessly take over other drones within wifi distance, creating an army of zombie drones under your control. Update: PoC of SkyJack for 3D Robotics drones using the TI CC1111 chipsets [August 2015] by Samy Kamkar // code@samy.pl // Dec 2, 2013 Follow me on twitter: @SamyKamkar SkyJack source code available here: Discover more of my technology at

Camera Restricta — Philipp Schmitt Algorithms are already looking through the viewfinder alongside with you: they adjust settings, scan faces and take a photo when you smile. What if your grin wasn't the only thing they cared about? Camera Restricta is a speculative design of a new kind of camera. The Freestone Drone by George Barber at waterside contemporary The Freestone Drone 2 February - 23 March 2013 Private view Friday, 1 February, 6-9pm George Barber in conversation with Sam Thorne (associate editor, Frieze) Wednesday, 27 February, 7pm waterside contemporary is pleased to present The Freestone Drone, a new video installation by George Barber, in his first solo exhibition at the gallery.

Dennis Cooper - Zac's Haunted House (A Novel) - Kiddiepunk DOWNLOAD TO VIEW OFFLINE Download the HTML novel by clicking here. INSTRUCTIONS: 1. The above link will take you to a Mediafire page. Enter the captcha words and press 'Authorize Download'. 2. Click the green 'Download' button. The file will automatically begin to download. 3. Turkish artist captures a surreal bird’s-eye view of Istanbul through the use of a drone In his photo series called ‘Flatland,’ Aydin Büyüktas photographs the scenic overview of the city of Istanbul through the use of a drone. The dizzying, distorted angles and beautifully warped buildings create intriguing images that monopolize your attention. The surrealist work gives the world another dimension and a fresh perspective on how we view it. This type of photography creates an additional outlet for artists by using new technologies to make images.

RICHARD VIJGEN [OBJECT ORIENTED INFORMATION DESIGN & RESEARCH] About the studio Studio Richard Vijgen is a design studio for contemporary information culture. I investigate new strategies to find the big stories in big data through research and design. My work is deeply rooted in the digital domain but always connects with physical or social space. I design and produce interactive data visualisations and data installations ranging from microscopic to architectural in scale. Icarus Cup There was no RAeS Icarus Cup taking place in 2015, however a human powered flying rally was organised by the British Human Powered Flying Club(BHPFC) at Lasham Airfield from Sat 25th July to Sun 2nd Aug 2015. The 2013 Icarus Cup for Human Powered Flight, supported by Breitling, took place at Sywell Aerodrome from 19 - 28 July. Visitors were able to see the aircraft that had been designed, engineered and constructed as well as watch as the pilots pedaled their aircraft to get airborne. Flying took place daily between 06.00-09.00 and 18.00-22.00 daily on most days as weather permitted.

RICHARD VIJGEN [OBJECT ORIENTED INFORMATION DESIGN & RESEARCH] About the studio Studio Richard Vijgen is a design studio for contemporary information culture. I investigate new strategies to find the big stories in big data through research and design. My work is deeply rooted in the digital domain but always connects with physical or social space. I design and produce interactive data visualisations and data installations ranging from microscopic to architectural in scale. I use code, pixels and 3D printers to describe the world.

There’s now a drone racing league that feels like pod racing from Star Wars Presidential candidate Donald Trump easily won the Republican Nevada primary with over 44% of the votes in early counting, in a election marked by complaints of fraud and chaos. He made a victory speech in front of a rowdy crowd dressed in “Make America Great Again” hats and t-shirts at his Las Vegas hotel, and expressed his love for everyone from casino mogul Steve Wynn to the “poorly educated.” He also offered up some more information about his plans should he be elected president, including keeping the Guantanamo Bay detention facility open and loading it up with “bad dudes.” Quartz has transcribed his entire victory speech.

New English Library The New English Library was a United Kingdom book publishing company, which became an imprint of Hodder Headline. History[edit] New English Library (NEL) was created in 1961 by the Times Mirror Company of Los Angeles, with the takeover of two small British paperback companies, Ace Books Ltd and Four Square Books Ltd, as a complement to its 1960 acquisition of New American Library in the United States.[1] The imprint was sold in 1981 to Hodder & Stoughton,[2] and became part of the merged Hodder Headline in 1993. The brand continued as a mass-market imprint for Hodder Headline, focussing on thrillers and horror, until 2004 when it was dropped following Hodder's assimilation into the Hachette Livre group, and a single Hodder & Stoughton paperback list was created, combining the NEL titles then in print with those in Hodder's previous Coronet (mainstream) and Flame (young and contemporary) paperback lines.[4] References[edit] Further reading[edit]