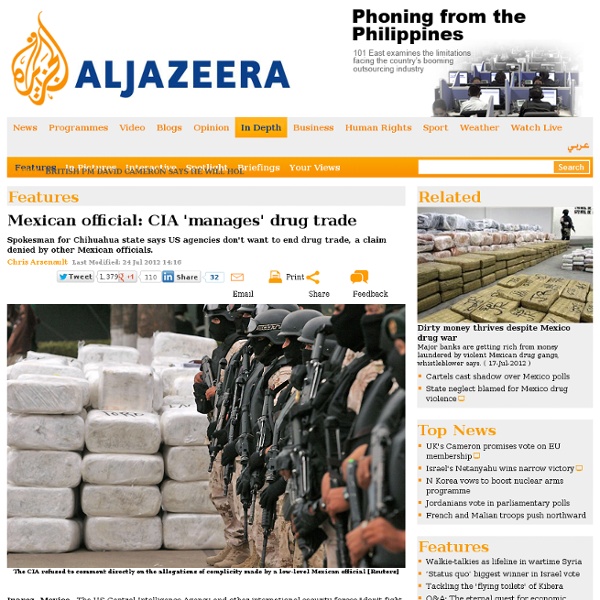 Juarez, Mexico - The US Central Intelligence Agency and other international security forces "don't fight drug traffickers", a spokesman for the Chihuahua state government in northern Mexico has told Al Jazeera, instead "they try to manage the drug trade". Allegations about official complicity in the drug business are nothing new when they come from activists, professors, campaigners or even former officials. However, an official spokesman for the authorities in one of Mexico's most violent states - one which directly borders Texas - going on the record with such accusations is unique. "It's like pest control companies, they only control," Guillermo Terrazas Villanueva, the Chihuahua spokesman, told Al Jazeera last month at his office in Juarez. A spokesman for the CIA in Washington wouldn't comment on the accusations directly, instead he referred Al Jazeera to an official website. Accusations are 'baloney' Drug war 'illusions' 'Conspiracy theories' Widespread rumours Political changes

The Dark Allience - Gary Webb / SJMN Series Rep. Maxine Waters, D-Calif., the chief congressional champion of a thorough investigation into the newspaper's findings, insisted yesterday that the Mercury News, while acknowledging problems with its series, has not retreated from findings that some drug money went to the contras. from Investigative journalist Gary Webb speaks to a packed house on the CIA's connection to drug trafficking, and the failure of the media to expose the truth. by Charles Overbeck Matrix Editoreasterisle@aol.com Dark Alliance author Gary Webb gave a fascinating talk on the evening of January 16, outlining the findings of his investigation of the CIA's connection to drug trafficking by the Nicaraguan contras. It was a fascinating exchange packed with detailed information on the latest developments in the case. In the meantime, you get another opportunity to see a ParaScope article come together from scratch, from behind the scenes.

Chinese Ape-Men: In Science and Myth Investigative Files Joe Nickell Volume 21.4, Winter 2011-2012 Figure 1. Southwest of Beijing, in the mountains around Zhoukoudian, the fossil primate Peking Man once flourished. The term ape-man is used in two major ways: scientifically, it designates any extinct primate having structural characteristics that are intermediate between man and ape (Webster’s 1980); popularly, the term also describes any of the various legendary hairy creatures that are characterized as “human-like apes or apelike humans”—the North American Sasquatch/Bigfoot, for example (Clark and Pear 1997, 207, 467). Extinct Primates One of my excursions out of Beijing was into the cave-pocked mountainous countryside at Zhoukoudian (Figure 1), site of a major twentieth-century paleontological find. Subsequently, at that World Heritage Site, I climbed the steep trails to the caves where Homo erectus pekinensis once lived (Figure 2), possibly making fire and using tools of chipped flint. Figure 2. Figure 3. Yeti, et al.

Trafficking Networks and the Mexican Drug War The abstract: Drug trade-related violence has escalated dramatically in Mexico during the past five years, claiming 40,000 lives and raising concerns about the capacity of the Mexican state to monopolize violence. This study examines how drug traffickers’ economic objectives influence the direct and spillover effects of Mexican policy towards the drug trade. Some numbers: . . . the probability that a drug trade-related homicide occurs in a municipality in a given month is 8.4 percentage points higher after a PAN mayor takes office than after a non-PAN mayor takes office. . . . the presence of a predicted drug trafficking route increases the value of illicit drug confiscations in a given municipality-month by around 18.5 percent. What happens when a law-and-order mayor gets elected? This map shows drug trade routs: Fascinating !!!

The US Record on Human Rights: More CIA Mind-Control Projects CIA Project Bluebird In 1950, the CIA initiated Project Bluebird, later renamed Project Artichoke, whose stated purpose was to develop “the means to control individuals through special interrogation techniques”, “way[s] to prevent the extraction of information from CIA agents”, and “offensive uses of unconventional techniques, such as hypnosis and drugs”. The purpose of the project was outlined in a memo dated January 1952 that stated, “Can we get control of an individual to the point where he will do our bidding against his will and even against fundamental laws of nature, such as self preservation?” The project studied the use of hypnosis, forced morphine addiction and subsequent forced withdrawal, and the use of other chemicals, among other methods, to produce amnesia and other vulnerable states in subjects. Cattell claimed that he did not know what the army had given him to inject into Blauer, saying: “We didn’t know whether it was dog piss or what we were giving him.”

The Ultimate 9/11 'Truth' Showdown: David Ray Griffin vs. Matt Taibbi -- Part II October 5, 2008 | Like this article? Join our email list: Stay up to date with the latest headlines via email. This is Part II of the "The Ultimate 9/11 'Truth' Showdown: David Ray Griffin vs. [The following is Matt Taibbi's five follow-up questions to Griffin's responses, which follow in order of the questions). ] August 7, 2008 -- Professor: As you've noticed, I struggled for quite some time with the question of how to answer your responses. Then it hit me, and probably far too late: the correct play here is to ignore you and your arguments entirely. After all, the thing that was always the most unrealistic aspect of 9/11 Truther theory was this notion that anyone in power in this country would need to pull off a stunt like this in order to further its nebulous imperialist agenda. The recent financial crisis shows most graphically that the financial powers that run this country have had a completely free hand to do as they pleased for decades, and certainly long before 9/11. 1. Uh, okay.

Study: 22 million Americans use illegal drugs More than 22 million Americans age 12 and older - nearly 9% of the U.S. population - use illegal drugs, according to the government’s 2010 National Survey on Drug Use and Health. The overall rate of drug use is only slightly higher than the 2009 study but nearly a percentage point above the 2008 survey. “I am encouraged there were no significant increases in drug use over the past year,” Gil Kerlikowske, the U.S. director of national drug control policy, said in a statement. Marijuana, cocaine, heroin, hallucinogens, inhalants and some prescription drugs used for non-medical purposes were counted in the survey. In 2010, 7 million people used psychotherapeutic drugs (including stimulants, tranquilizers, painkillers and sedatives) for non-medical purposes, and 1.2 million people used hallucinogens, according to the study. One and a half million people used cocaine, similar to recent years' study results but a drop of nearly 1 million from 2006. Alcohol use Treatment

Project Azorian: The CIA's Declassified History of the Glomar Explorer Posted - February 12, 2010 Edited by Matthew Aid with William Burr and Thomas Blanton For more information contact: 202/994-7000 Washington, D.C., February 12, 2010 - For the first time, the Central Intelligence Agency (CIA) has declassified substantive information on one of its most secret and sensitive schemes, "Project Azorian," the Agency codename for its ambitious plan to raise a sunken Soviet submarine from the floor of the Pacific Ocean in order to retrieve its secrets. National Security Archive director Tom Blanton commented that "the Navy alternative to the Glomar Explorer--investigation by a deep sea submersible--sounds more convincing than the claim in the Studies in Intelligence article that Project Azorian advanced the cutting edge of deep sea exploration the way the CIA did on aerial and satellite reconnaissance. Project Azorian The CIA's Declassified History of the Glomar Explorer By Matthew Aid So what can we surmise about what "Project Azorian" accomplished? Notes 1. 2. 3.

The Ultimate 9/11 'Truth' Showdown: David Ray Griffin vs. Matt Taibbi October 5, 2008 | Like this article? Join our email list: Stay up to date with the latest headlines via email. A poll of 17 countries that came out September of this year revealed that majorities in only nine of them "believe that al Qaeda was behind the 9/11 terrorist attacks on the United States." Over the years, AlterNet has run dozens of stories, mostly critical, of the 9/11 Truth Movement. In April, I asked Taibbi if he would be interested in interviewing David Ray Griffin, a leading member of Scholars for 9/11 Truth & Justice, Emeritus Professor of Philosophy of Religion and Theology at Claremont School of Theology and Claremont Graduate University and author of seven of books on 9/11, about his recent book, 9/11 Contradictions. 1. Before responding to your first question, however, I need to address a theme that is implicit throughout your questions. You made this claim in the article in which you referred to "9/11 conspiracy theorists" as "idiots." The judge convicts you of murder.

The Central Intelligence Agency 9/11 File: Hundreds of Secret Agency Documents on Osama Bin Laden Declassified Washington, D.C., June 19, 2012 – The National Security Archive today is posting over 100 recently released CIA documents relating to September 11, Osama bin Laden, and U.S. counterterrorism operations. The newly-declassified records, which the Archive obtained under the Freedom of Information Act, are referred to in footnotes to the 9/11 Commission Report and present an unprecedented public resource for information about September 11. The collection includes rarely released CIA emails, raw intelligence cables, analytical summaries, high-level briefing materials, and comprehensive counterterrorism reports that are usually withheld from the public because of their sensitivity. Today's posting is the result of a series of FOIA requests by National Security Archive staff based on a painstaking review of references in the 9/11 Commission Report. Reports on early attempts to apprehend bin Laden detail the beginning of the U.S. Highlights of the CIA September 11 Document Collection Include:

A Nation of Spies and Snitches - By J.M. Berger In the aftermath of the 9/11 attacks, one of the most stinging criticisms leveled at the CIA was that it had utterly failed to penetrate al Qaeda with a human source. That worm turned this week when headlines erupted with the story of how a Saudi spy, working in conjunction with the CIA, penetrated al Qaeda in the Arabian Peninsula (AQAP), preventing an attack on a U.S.-bound airliner, providing critical intelligence to guide a drone strike against a sought-after AQAP commander, and delivering an intact bomb design for U.S. intelligence to dissect. It was, by any measure, a spectacular intelligence coup going to the heart of the al Qaeda branch believed to be most actively conspiring to kill Americans. So just as virtually every "domestic Terror plot" is one conceived, directed, funded and controlled by the FBI, this new Al Qaeda plot from Yemen was directed by some combination of the CIA and its Saudi partners. Greenwald was not alone in making this questionable assessment.