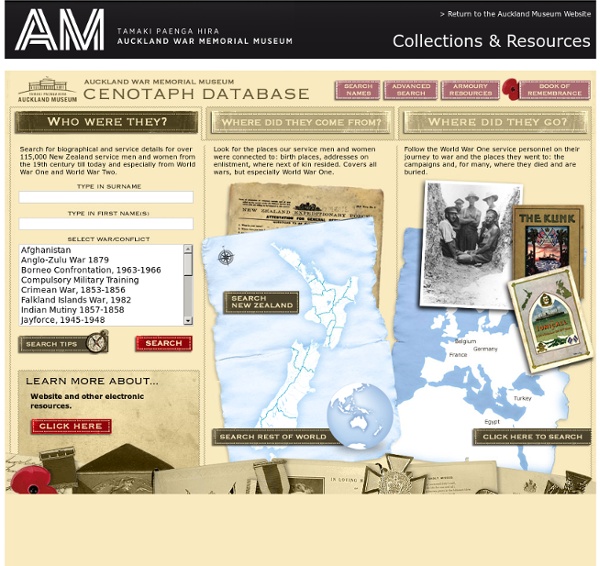 Search for biographical and service details for over 115,000 New Zealand service men and women from the 19th century till today and especially from World War One and World War Two. Website and other electronicresources. Look for the places our service men and women were connected to: birth places, addresses on enlistment, where next of kin resided. Covers all wars, but especially World War One. Follow the World War One service personnel on their journey to war and the places they went to: the campaigns and, for many, where they died and are buried.

WW100 New Zealand A selection of sites and sources for learning about the history of the First World War from a New Zealand perspective, and the role your family members might have played in it. Soldiers inside the YMCA library in Beauvois, France. Ref: 1/2-013635-G. 30th Battalion: Australian War Memorial The 30th Battalion was raised as part of the 8th Brigade at Liverpool in New South Wales on 5 August 1915. Most of its recruits hailed from the Newcastle region and other parts of country New South Wales, but almost an entire company was composed of former RAN ratings from Victoria. The 8th Brigade joined the newly raised 5th Australian Division in Egypt and proceeded to France, destined for the Western Front, in June 1916. The 30th Battalion’s first major battle was at Fromelles on 19 July 1916. It was tasked with providing carrying parties for supplies and ammunition but was soon drawn into the vicious fighting. Following Fromelles, the battalion was rotated in and out of the front line along with others in the brigade, but played no major offensive role for the rest of the year.

Te Ara - New Zealand Origins The First World War was caused by the destabilisation of the balance of power in Europe due to the rise of Germany. The war began in 1914 when Austria-Hungary invaded Serbia because of the assassination of an archduke. Anzac Day Collection This documentary gave NZ viewers, for the first time, a Turkish view of the Gallipoli story. Produced for TVNZ and Turkish TV, it focuses on four young people, two Turks and two New Zealanders, descended from Gallipoli veterans, as they explore the grim reality of their ancestors’ experience. Six Māori Battalion soldiers camped in Italian ruins wait for night to fall. In the silence the bros-in-arms distract themselves with jokes before a tohu (sign) brings them back to reality. Directed by Oscar-nominated Taika Waititi it won international acclaim: honourable mention at Sundance and a special jury prize at Berlin.

U.S. World War I Propaganda All images are digitized | All jpegs/tiffs display outside Library of Congress | View All During World War I, the impact of the poster as a means of communication was greater than at any other time during history. The ability of posters to inspire, inform, and persuade combined with vibrant design trends in many of the participating countries to produce thousands of interesting visual works. The Library of Congress Prints & Photographs Division makes available online approximately 1,900 posters created between 1914 and 1920. Most relate directly to the war, but some German posters date from the post-war period and illustrate events such as the rise of Bolshevism and Communism, the 1919 General Assembly election and various plebiscites. The majority of the posters were printed in the United States.

Digital Collection - NZ You are here: Home > Digital Collection > Wars & conflict Heritage Digital Collection Home War Poetry: Ted Hughes: 'Bayonet Charge' I have already said my piece about the AQA GCSE poetry syllabus and what it calls the 'Conflict' cluster. (I take 'cluster' to be the AQA's decorous abbreviation of a more accurate military term which, alas, cannot be used on a family-friendly blog.) Now I will do my best to help those unfortunates brought to this site in search of information about one particular poem: Ted Hughes's 'Bayonet Charge'. What follows is a set of loose notes.

First War War Poetry The First World War Poetry Digital Archive is an online repository of over 7000 items of text, images, audio, and video for teaching, learning, and research. The heart of the archive consists of collections of highly valued primary material from major poets of the period, including Wilfred Owen, Isaac Rosenberg, Robert Graves, Vera Brittain, and Edward Thomas. This is supplemented by a comprehensive range of multimedia artefacts from the Imperial War Museum, a separate archive of over 6,500 items contributed by the general public, and a set of specially developed educational resources. These educational resources include an exciting new exhibition in the three-dimensional virtual world Second Life.