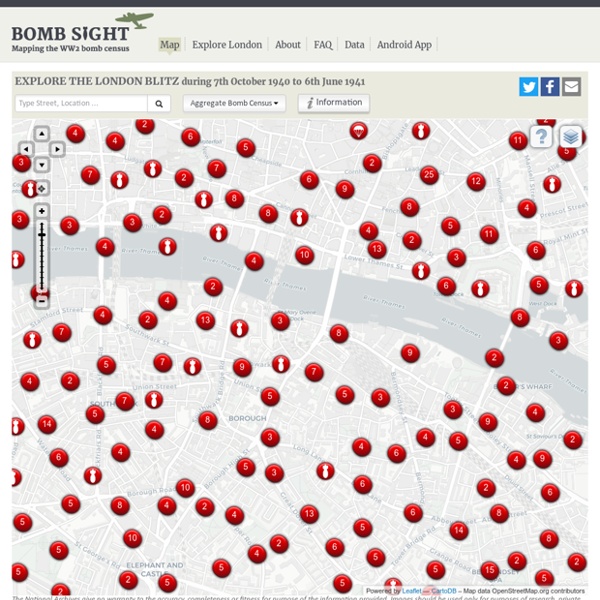 With Bomb Sight you can discover what it was like in London, during WW2 Luftwaffe Blitz bombing raids, exploring maps, images and memories. The Bomb Sight web map and mobile app reveals WW2 bomb census maps between 7/10/1940 and 06/06/1941, previously available only by viewing them in the Reading Room of The National Archives. How to use the Map Use the search box to find a street or postcode of interest You can move around the map by clicking on the pan controls Use the zoom controls to change the detail on the map: Click the plus (+) to see more detail and click the minus (-) to see less map detail Use the layer button in the top left to explore the different types of map information that is available Click on individual bomb icons to find out more information Click on the to have a look at the map legend (this button is not available when viewing the website on a small screen) What information is available?

Buddha Teachings Following the Buddha's FootstepsInstilling Goodness SchoolCity of Ten Thousand BuddhasTalmage, CA 95481 As a child, Siddhartha the Buddha, was troubled by some of the same thoughts that children today have. They wonder about birth and death. They wonder why they get sick and why grandfather died. They wonder why their wishes do not come true. Children also wonder about happiness and the beauty in nature. Story Starters, Creative Writing Ideas for Fiction Looking for story starters and creative writing ideas? You've just struck gold. Here you'll find an endless supply of inspiration. Bye-bye, Writer's Block. The Long March 1934 to 1935 The Long March saved Mao Zedong and the Communist Party from the attacks by the Guomingdang. The Long March came about when the Chinese Communists had to flee a concerted Guomingdang attacked that had been ordered by Chiang Kai-shek. In the autumn of 1933, the Guomindang leader Chiang Kai-shek launched a huge attack against the Communists who were then based in the Jiangxi and Fujian provinces in south-east China. The Guomindang was advised by the German general, Hans von Seeckt. He advised Chiang Kai-shek not to launch a full frontal attack on Jiangxi. 500,000 Guomindang troops surrounded Jiangxi in an attempt to strangulate the Communists. The Guomindang had a policy of making a slow advance building trenches and blockhouses as they went to give the Guomindang troops there places of protection.

Proletarian posters from 1930s Japan In the 1930s, a new style of poster emerged that reflected the growing significance of the masses in Japanese society. These artistic posters borrowed elements from Western design and often incorporated bold slogans with political, economic and educational themes. Here are a few examples. Vintage Audio - Call of America Reproduced below is the speech recorded by the U.S. Democratic Party politician James Hamilton Lewis, who served as a whip in the U.S. Senate. 13 Browser-Based Tools For Writers Portability and accessibility are important for writers. You never know when inspiration will hit, and when it does you don’t want to be caught off guard. Professional software suites can be nice but often times are overkill, localized, and more hassle than they’re worth. Browser-based writing tools are available no matter where you go. Whether you need help with organization, a way to kill distractions, or a clean slate on which to write your words, these tools will prove useful to all of you who write on a regular basis. Don’t miss out!

100 Incredible YouTube Channels for History Buffs » Online College Search If you love history, or just want to learn more about it, YouTube has exactly what you need. Always up to the challege of providing thorough, accurate information, YouTube delivers channels from leading names in historical studies, from The Smithsonian to the Discovery Channel. You’re sure to find just the right information you need for your lecture, lesson plan, or perhaps just your personal viewing pleasure. Operation Mincemeat and spycraft in World War Two : The New York On April 30, 1943, a fisherman came across a badly decomposed corpse floating in the water off the coast of Huelva, in southwestern Spain. The body was of an adult male dressed in a trenchcoat, a uniform, and boots, with a black attaché case chained to his waist. His wallet identified him as Major William Martin, of the Royal Marines.

EyeWitness To The Middle Ages and Renaissance Life in a Christian Monastery, ca. 585"When he was dead his body was not placed with the bodies of the brethren, but a grave was dug in the dung pit, and his body was flung down into it. . . " Crime and punishment in a medieval monastery: the monastery's Abbott provides insight into the monastic life. The Vikings Discover America, ca. 1000"There was no want of salmon either in the river or in the lake." Five hundred years before Columbus, the Vikings discover a New World. Invasion of England, 1066The Norman conquest of Anglo-Saxon England described through the images of the 900 year-old Bayeux Tapestry. Anarchy in 12th Century EnglandThe Anglo-Saxon Chronicle paints a sobering picture of life in 12th century England that contrasts strikingly with Hollywood's image of the Middle Ages.

25 Insights on Becoming a Better Writer When George Plimpton asked Ernest Hemingway what the best training for an aspiring writer would be in a 1954 interview, Hem replied, “Let’s say that he should go out and hang himself because he finds that writing well is impossibly difficult. Then he should be cut down without mercy and forced by his own self to write as well as he can for the rest of his life. At least he will have the story of the hanging to commence with.” Today, writing well is more important than ever.