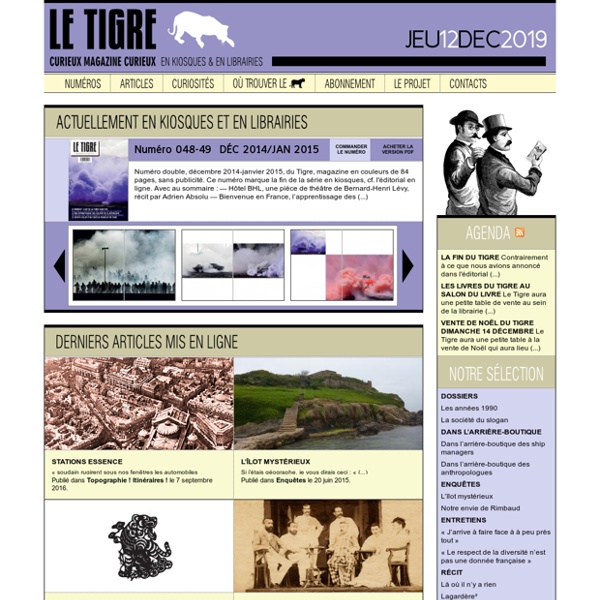 Art Monthly : Home : The UK's leading contemporary art magazine Life and Death Paul O’Kane on art and being >>Read now The Ancient Greeks’ 6 Words for Love (And Why Knowing Them Can Change Your Life) by Roman Krznaric This article originally appeared in Sojourners. Today's coffee culture has an incredibly sophisticated vocabulary. Do you want a cappuccino, an espresso, a skinny latte, or maybe an iced caramel macchiato? Eros involved a loss of control that frightened the Greeks. The ancient Greeks were just as sophisticated in the way they talked about love, recognizing six different varieties. They would have been shocked by our crudeness in using a single word both to whisper "l love you" over a candlelit meal and to casually sign an email "lots of love."

Museum of Arts and Design Collection Database Dead or Alive, presented by the Museum of Arts and Design from April 27 through October 24, 2010, will showcase the work of over 30 international artists who transform organic materials and objects that were once produced by or part of living organisms-insects, feathers, bones, silkworm cocoons, plant materials, and hair-to create intricately crafted and designed installations and sculptures. The exhibition explores a territory related to MAD's Second Lives: Remixing the Ordinary, which featured contemporary works created from multiples of ordinary manufactured items. In Dead or Alive, the materials transformed by the artists are entirely natural. Once-living parts of flora and fauna are recombined and rearranged into works of art that address the transience of life, and all that is elegant and alarming about the natural world. Catalogue A full-color exhibition catalogue is available for puchase at thestore.madmuseum.org

MOUSSE CONTEMPORARY ART MAGAZINE Recently, the Miami-based artist Jillian Mayer shared with me selfeed.com, a project that she, Erik Carter, and Tyler Madsen premiered in January 2014 at the Utah Museum of Fine Arts. The site is a real-time stream of images tagged #selfie on Instagram, a continuous cycle of faces from around the planet, at all hours, in all poses, in any number of social configurations: lonely teens in bathrooms, group shots in hallway mirrors, couples at dinner, bros at the game. The stream moves too quickly for any one selfie to stand out. Art Maps Rich Barrett-Small (Lead Developer and Web Architect, Tate) Kirstie Beaven (Producer, Interactive Media, Tate) Steve Benford (Professor of Collaborative Computing, Head of School of Computer Science, University of Nottingham) Laura Carletti (Research Fellow, Horizon Digital Economy Research Institute)

Profile - 032c Workshop Finding the new in the old and the old in the new, it is considered the “Berlin magazine that propagates an aesthetic of brutal elegance” by the Frankfurter Allgemeine Zeitung, or simply as the “revue ultra-pointue” by Vogue Paris. The magazine fuses art and architecture, literature, urban studies and fashion in ways that can make one forget how depressing a visit to the newsstand has become.” The New York Times→ more Press Coverage

Moving Target Visual art and poetry have long been cross-fertilizing forces in the Bay Area. Much of this history is well known and well-documented. Think of the wild sociality of Beat painters and poets in North Beach or the multidisciplinary scene that gathered around 80 Langton Street in the late 1970’s, to name just two moments in time. Video In Mainline's newest and 12th instalment of their TRIBUTE series, Chantal Anderson follows an Icelandic teen, Úa and her wanderlust. The 14-year-old artist who's name represents the sound of a specific noise a bird makes when it has found love, speaks freely and honestly about growing up in her hometown, and how her choice of wanting to move away filters down to her creativity often being stumped by her surroundings. The familiar restraint, which impedes on a teenagers continuing quest for freedom, is illustrated through Úa’s experiences in the film. We speak to Chantal Anderson about her four-minute motion picture.