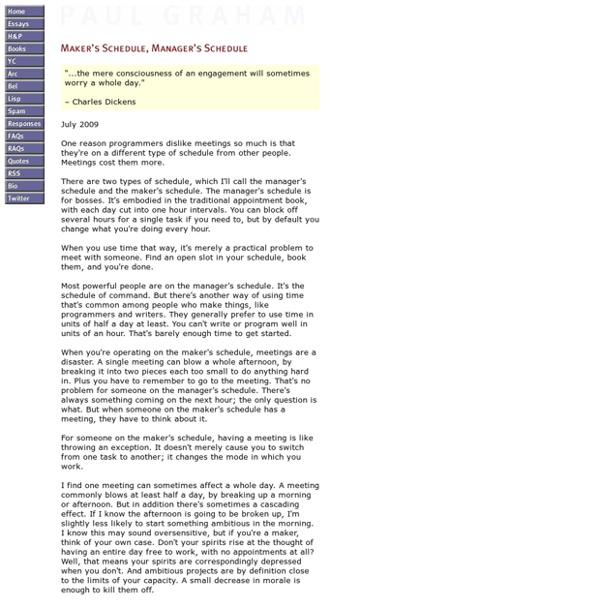 How to Do What You Love January 2006 To do something well you have to like it. That idea is not exactly novel. We've got it down to four words: "Do what you love." But it's not enough just to tell people that. Doing what you love is complicated. FREE Interactive Learning OpenCourseware from MIT, UC Berkeley, Harvard, Yale, Stanford, U Houston, USC, UCLA, Khan Academy, NPTEL General description: Language may refer either to the specifically human capacity for acquiring and using complex systems of communication, or to a specific instance of such a system of complex communication. The scientific study of language in any of its senses is called linguistics. The approximately 3,000–6,000 languages that are spoken by humans today are the most salient examples, but natural languages can also be based on visual rather than auditory stimuli, for example in sign languages and written language.

On Self-Promotion You are a shameless self promoter!” he said. I can’t speak to the “shame” part, but for the rest: guilty as charged. Networked Knowledge and Combinatorial Creativity by Maria Popova Why creativity is like LEGO, or what Richard Dawkins has to do with Susan Sontag and Gandhi. In May, I had the pleasure of speaking at the wonderful Creative Mornings free lecture series masterminded by my studiomate Tina of Swiss Miss fame. I spoke about Networked Knowledge and Combinatorial Creativity, something at the heart of Brain Pickings and of increasing importance as we face our present information reality. The talk is now available online — full (approximate) transcript below, enhanced with images and links to all materials referenced in the talk.

7 Ways Noise Affects Your Health We are surrounded by sound. From coworker chit-chat to the sounds of traffic outside to that tinny trace of music coming from a co-commuter’s earbuds, we often don’t consider the noise that makes up our daily environments. But the truth is that the distant jackhammers, incessant elevator bells and even the whistling and humming of the people around us can have a real effect on our health and wellness. As pioneering noise researcher and environmental psychologist Arline Bronzaft, Ph.D., of the City University of New York has said, noise is in the ear of the beholder. “While the ear picks up the sound waves and sends it to the temporal lobe for interpretation, it’s the higher senses of the brain that determine whether that sound is unwanted, unpleasant or disturbing.” Read on to learn more about how noise affects your well-being.

Hard Things You Need To Do To Be Successful You have to make the call you’re afraid to make. You have to get up earlier than you want to get up. You have to give more than you get in return right away. You have to care more about others than they care about you. You have to fight when you are already injured, bloody, and sore. Scholars’ rude awakenings Does bitchiness serve any useful scholarly purpose? Source: Paul Bateman In the German context, a question is either an attempt to present one’s own view or an attack meant to question the authority of the speaker It seems to me”, says Clive Bloom, emeritus professor of English and American studies at Middlesex University, “that academics are the rudest people on earth.” Bloom’s first book, The Occult Experience and the New Criticism (1986), was greeted with a review claiming that it “mentions every orifice except the arsehole from whence [it] emerged”. Such “bitchiness”, he believes, comes from many reviewers thinking to themselves: “I wanted to write the book I’m reviewing” or “I’m the expert (but no one has noticed).”

The Psychology of Getting More Done (in Less Time) In today’s busy world, we’ve become a people obsessed with productivity and “work hacks.” Getting more done in less time allows us to get ahead, and even gives us more availability to do the things we love outside of work. The problem we run into is that it is easy to get motivated, but hard to stay disciplined. Most of us look at productivity in the wrong way: task management tools are shiny at first and then go unused. Corned Beef Hashtag It starts at 6 a.m. with the alarms that wake us up. Then the television goes on for the news, because so much has probably changed in the four or five hours that, maybe, I’ve been asleep. The coffee maker gurgles and burps in the background. The toaster pops and the skillet sizzles. The child groans and complains in an effort to resist getting out of bed, once she is up, fed, and dressed, I exchange a brief goodbye with my wife I open the door with a creak.

ohdeardrea: How To Have A Great Life Without Spending A Lot Of Money + Saving Some Too I'd like to think I might be an expert in this category, but I'm not sure what gives anyone expert status on these things. I mean, I'm not a financial or money expert of any sort. In reality, I don't like to talk about money--- so this really is not a post on how to get rich in money, but how we live our good (great) life. We're a middle class family with two incomes. We're not rich. We have tighter weeks and really easy weeks and have great adventures in both.

18 Things Highly Creative People Do Differently This list has been expanded into the new book, “Wired to Create: Unravelling the Mysteries of the Creative Mind,” by Carolyn Gregoire and Scott Barry Kaufman. Creativity works in mysterious and often paradoxical ways. Creative thinking is a stable, defining characteristic in some personalities, but it may also change based on situation and context. Inspiration and ideas often arise seemingly out of nowhere and then fail to show up when we most need them, and creative thinking requires complex cognition yet is completely distinct from the thinking process. The science behind optimizing a productive work environment 1.9K Flares Filament.io 1.9K Flares × I’ve written about how creativity works in the brain before, and I found it really useful to understand this process. Or, I should say, multiple processes. There’s so much going on in the brain during creativity that science is still trying to pin down exactly how it all works. What we do know is which three parts of the brain work together to help us create and come up with new ideas: The Attentional Control Network helps us with laser focus on a particular task.

Hacking Knowledge: 77 Ways to Learn Faster, Deeper, and Better If someone granted you one wish, what do you imagine you would want out of life that you haven’t gotten yet? For many people, it would be self-improvement and knowledge. Newcounter knowledge is the backbone of society’s progress. Finite Attention Span One Friday in May of 2011, I locked up my shared office, went to the pub with some colleagues and students, and said goodbye to my job as a senior lecturer in psychology. On the following Tuesday (it was a bank holiday weekend) I started a three-month stint as an intern at a then-mid-sized software company. They were pretty clear that there wouldn’t be more work at the end of it; all I had going for me was that they were paying me — a lot less than my academic job paid, but hey, it was money. (Let’s not even start on the ridiculous exploitation of young people by companies looking for free labour, or how unpaid internships exclude those who can’t afford to work for free.) Anyway, so … lunacy, right? Maybe.