Andrew Blum: What is the Internet, really? 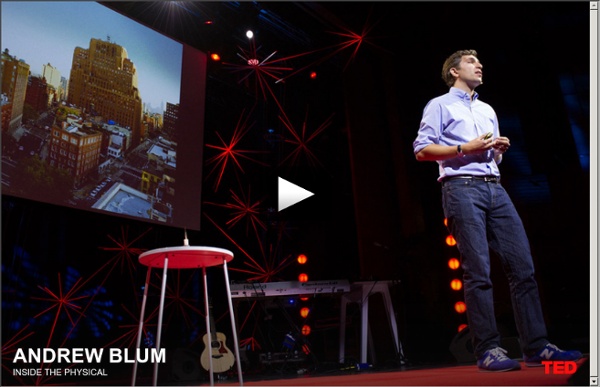 Big brother is watching you shop For the past 20 years, those who say that Big Brother is watching you have tended to focus their attention on bogey men such as the ubiquitous CCTV cameras, the National DNA Database and the US and Chinese governments snooping on emails. More recently, though, it's become clear that governments aren't alone in their interest. Companies, particularly those with big online operations, are building up increasingly sophisticated pictures of their customers - and their model is more Brave New World than 1984. Of course, concerns about online privacy are nothing new. Over the past couple of years, as companies have learned to use everything from their consumer databases to cookies, and as commerce moves onto tablets and smartphones, whole new streams of data are appearing. In the middle of last year, it was reported that the travel site Orbitz was showing visitors who were using Apple Macs more expensive hotels than those who were using PCs. But does any of this matter? Huddart thinks not.

Brilliant 10: Greg Nielson Shrinks Solar Cells To The Size Of Glitter Greg Nielson pushes a small jar full of rubbing alcohol across his desk at Sandia National Laboratories in New Mexico. In the jar float shiny solar cells the size of glitter. "If you have panels of these on top of Walmart, you get twice as much power [as conventional photovoltaics] and your costs go down by half," he says. For the past six years, Nielson has worked to dramatically reduce the size of solar cells in order to make them more durable, efficient, and cost-effective. When the Utah native arrived at Sandia in 2004, Nielson was one of the world's leading Greg NielsonAge 38Sandia National Laboratoriesresearchers of optical microelectro-mechanical systems—technology that uses light to drive tiny machines. It was a wrong number in 2005 that led him into solar power. These days, Nielson leads a team of 30 researchers working on solar glitter, which could significantly improve the efficiency of flexible photovoltaics.

Mundo Hacker Radio de Mundo Hacker Radio uk.businessinsider Wireless power for the price of a penny? The newspaper-style printing of electronic equipment has led to a cost-effective device that could change the way we interact with everyday objects. For a price of just one penny per unit the device, known as a rectenna, which is presented August 10, in IOP Publishing's journal Nanotechnology, can be placed onto objects such as price tags, logos and signage so that we can read product information on our smartphones with one simple swipe. This type of technology, which is known as near-field communication (NFC), has already been implemented to allow fast money transactions; however, this new device could lead the way to large-scale adoption at a low cost. The rectenna, created by researchers from Sunchon National University and Paru Printed Electronics Research Institute, could be implemented onto everyday objects so that they can harness the power given off by the smartphone's radio waves and send information back to it via printed digital circuits.

With mind-reading speller, free-for-all conversations that are silent and still Researchers have come up with a device that may enable people who are completely unable to speak or move at all to nevertheless manage unscripted back-and-forth conversation. The key to such silent and still communication is the first real-time, brain-scanning speller, according to the report published online on June 28 in Current Biology, a Cell Press publication. The new technology builds on groundbreaking earlier uses of fMRI brain scans to assess consciousness in people described as being in an unconscious, vegetative state and to enable them to answer yes and no questions. fMRI (or functional magnetic resonance imaging) is typically used for clinical and research purposes to track brain activity by measuring blood flow. The new evidence shows that the answer to that thought question is yes. In each communication experiment, participants held a mini-conversation consisting of two open questions and answers.

Explain that stuff! Science and technology made simple Discovery in synthetic biology takes us a step closer to new 'industrial revolution' Scientists report that they have developed a method that cuts down the time it takes to make new 'parts' for microscopic biological factories from 2 days to only 6 hours. The scientists, from Imperial College London, say their research brings them another step closer to a new kind of industrial revolution, where parts for these biological factories could be mass-produced. These factories have a wealth of applications including better drug delivery treatments for patients, enhancements in the way that minerals are mined from deep underground and advances in the production of biofuels. Professor Paul Freemont, Co- Director of the Centre for Synthetic Biology and Innovation at Imperial College London and principle co-investigator of the study, which is published February 1 in the journal Nucleic Acids Research, says: "Before the industrial revolution most items were made by hand, which meant that they were slower to manufacture, more expensive to produce and limited in number.