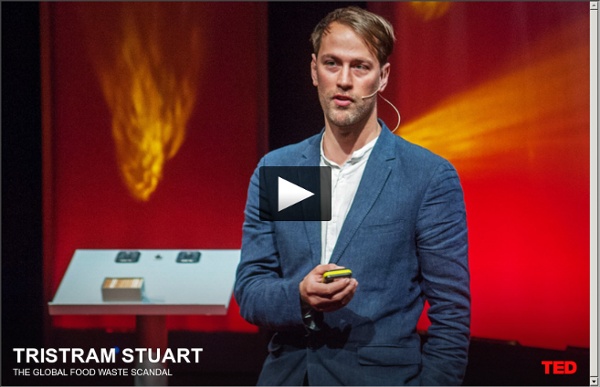 Spotlight on Food Security: The Key to Economic, Environmental and Global Stability Tjada McKenna, Deputy Coordinator for Development for Feed the Future | USAID | USAID IMPACTblog You may have noticed a lot of increased talk about “food security” lately, particularly in the international development realm. There’s good reason for that. A family experiences food security when it lives without hunger or even fear of hunger. In essence, it means that people have enough food to live happy, healthy lives. Transition to a world without oil: Rob Hopkins on TED Global Issues X marks the spot: This week’s TEDx Talks The paradox of finding peace in a war zone, and a way to make aid more effective — by decentralizing it and thus speeding it up. Each week, TEDx chooses four of our favorite talks, highlighting just a few of the enlightening speakers from the TEDx community and its diverse constellation of ideas worth spreading. […] News

Virtual Water - Discover how much WATER we EAT everyday The good news is that each one of us can also make the world a little more water secure, ready to face the needs of our peak population future. How? The answer lies in our shopping baskets. The amount of meat in our diet is crucial! The average daily water consumption of a meat-eating person is 5000 litres of water per day. The average for a vegetarian is 2500 litres. Mercury Contamination of Aquatic Ecosystems Note: This file is also available in acrobat (.pdf) format: FS_216-95 (file size 1.6 MB) Mercury has been well known as an environmental pollutant for several decades. As early as the 1950¹s it was established that emissions of mercury to the environment could have serious effects on human health. These early studies demonstrated that fish and other wildlife from various ecosystems commonly attain mercury levels of toxicological concern when directly affected by mercury-containing emissions from human-related activities.

The Book of Symbols: Carl Jung’s Catalog of the Unconscious by Kirstin Butler Why Sarah Palin identifies with the grizzly bear, or what the unconscious knows but doesn’t reveal. A primary method for making sense of the world is by interpreting its symbols. Institution of Mechanical Engineers Feeding the 9 Billion: The tragedy of waste By 2075, the United Nations’ mid-range projection for global population growth predicts that human numbers will peak at about 9.5 billion people. This means that there could be an extra three billion mouths to feed by the end of the century, a period in which substantial changes are anticipated in the wealth, calorific intake and dietary preferences of people in developing countries across the world. Such a projection presents mankind with wide-ranging social, economic, environmental and political issues that need to be addressed today to ensure a sustainable future for all. One key issue is how to produce more food in a world of finite resources.

Government rejects the science behind neonicotinoid ban 10 September 2013Last updated at 10:13 ET By Matt McGrath Environment correspondent, BBC News Scientific disputes continue over the impacts of neonicotinoid chemicals on bees The government says it accepts the EU ban on the use of some pesticides linked to bee deaths, but it rejects the science behind the moratorium. In a response to the Environmental Audit Committee, the government does not acknowledge the case for a ban on these chemicals for gardeners.

Deepermind Table of Contents-George Norwood Home Page March 23,2013 1. Introduction to Deepermind Words are not things. Inner and Outer Worlds, the Body and Consciousness. At This Free Food Festival, All The Ingredients Are Food Waste At the Feeding the 5000 food festival in New York City, the first thing people walking by may notice is that all the food is free. It isn't obvious, though, that all the offerings are made from food waste. A torte is made with trimmings and peelings from a food distributor; a "quick pickle salad" is made with surplus greens and vegetables. Dan Barber, head chef and co-owner of Manhattan's Michelin-starred Blue Hill, will offer a limited number of cookies made with the almond flour left over when manufacturers make almond oil. Other chefs will also offer cooking demonstrations with food that might otherwise be thrown out. "I like the idea of changing people's habits and minds through pleasure and hedonism and enjoyment," says Barber.

Sudan: 'Food Shortages and Suffering for 129,000 Displaced in South Darfur' - Commissioner Girayda — The Commissioner of Humanitarian Aid for Girayda locality in South Darfur, El Tayeb Suleiman, has acknowledged that more than 129,000 displaced persons in the locality are facing "a shortage of food and real suffering". Suleiman told Radio Dabanga that the displaced have not received any food rations since July, and have been sharing what little they have left. He warned that "a humanitarian disaster might occur in the locality, because the population have not been able to farm their lands this year due to security instability," referring to the deaths of more than 16 farmers in attacks. The commissioner also confirmed that the World Food Programme (WFP) required the displaced to provide a barrel of petrol for each of the 23 trucks that must transport the food. This has been echoed by reports from the Girayda displaced.

Deep Web Intelligence We are finding many different industries are able to capitalize on Data-as-a-Service (DaaS). In this post we’ll uncover how a mining company is using BrightPlanet’s Data-as-a-Service model to monitor the Ebola health outbreak to keep their expatriates informed and out of harm’s way with the use of one dataset. You’ll see what type of data is harvested and how it is enriched to make it usable. Continue reading

Half of all US food produce is thrown away, new research suggests Americans throw away almost as much food as they eat because of a “cult of perfection”, deepening hunger and poverty, and inflicting a heavy toll on the environment. Vast quantities of fresh produce grown in the US are left in the field to rot, fed to livestock or hauled directly from the field to landfill, because of unrealistic and unyielding cosmetic standards, according to official data and interviews with dozens of farmers, packers, truckers, researchers, campaigners and government officials. From the fields and orchards of California to the population centres of the east coast, farmers and others on the food distribution chain say high-value and nutritious food is being sacrificed to retailers’ demand for unattainable perfection. “It’s all about blemish-free produce,” says Jay Johnson, who ships fresh fruit and vegetables from North Carolina and central Florida. “What happens in our business today is that it is either perfect, or it gets rejected.

Food crisis looms over southern African countries JOHANNESBURG - Aid agencies say southern Africa is facing a food crisis. The agencies say the early warnings are there and that it’s time for the international community to act before it becomes a real crisis. Namibia, Malawi, and Zimbabwe are the most affected.

Aesthetic Consumerism and the Violence of Photography: What Susan Sontag Teaches Us about Visual Culture and the Social Web by Maria Popova “Needing to have reality confirmed and experience enhanced by photographs is an aesthetic consumerism to which everyone is now addicted.” Ever since its invention in 1839, the photographic image and its steady evolution have shaped our experience of reality — from chronicling our changing world and recording its diversity to helping us understand the science of emotion to anchored us to consumer culture. But despite the meteoric rise of photography from a niche curiosity to a mass medium over the past century and a half, there’s something ineffably yet indisputably different about visual culture in the digital age — something at once singular and deeply rooted at the essence of the photographic image itself.