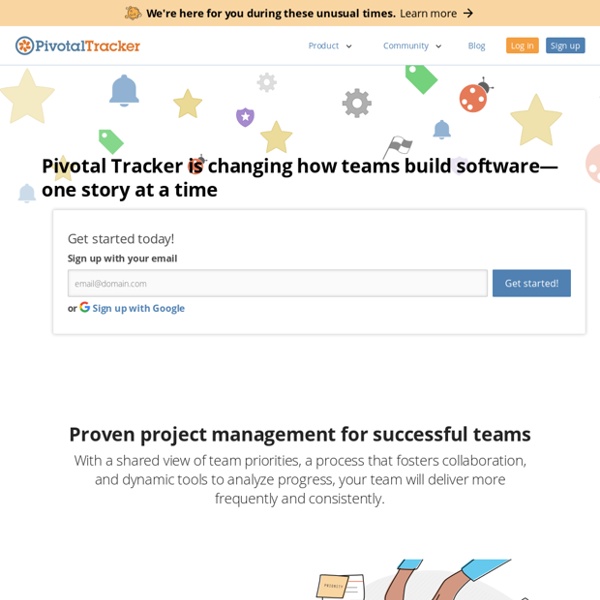 Criticism and Two Way Streets A post by Jason Fried titled “Give it 5 minutes” reminded me of a great technique I learned about from Bill Buxton. Bill is a Principal Researcher in Microsoft where his main role focuses on designing a company that permits great design to happen. As many have learned to their peril, it’s not simply a case of just dumping talent in a room full of Ikea furniture. Free Agile Project Management Templates in Excel Agile Project Plan Template An agile project plan is based on features. The plan estimates how long it will take for each feature to be delivered, without much detail on how it will be delivered. And because the project plans are focused on features, you can group similar features into sprints. Top Agile and Scrum Tools - Which One Is Best? There are many different types of Agile tools out there. Some are free, some are paid, some are going by the new business model called “Freemium” in which you get a distilled version of the software but to get all the awesome features and scaleability you have to pay. So which Agile tools are out there?

Screw the Power Users I designed HomeSite and TopStyle for power users. Only power users would want to edit HTML & CSS by hand, so I made sure to cater to them. Those products were filled with features and tool buttons, and their settings dialogs contained dozens of geeky options. Customers liked them that way. Agile Excel Spreadsheet for the Product Backlog I want to show a real easy way to put user stories in a spreadsheet-based product backlog. I wrote this after seeing someone tweet a screen capture of a product backlog I made nine years ago and thought to myself, “Yikes, that's out of date for how I do it today …” So in this post, well look at an agile product backlog template in Excel. As you probably know, I'm a big fan of writing the product backlog in the form of user stories and of writing user stories in the form: “As a _____, I ______, so that _______.” An example being: “As a frequent flyer, I really want to be able to connect to the internet while flying so that I can update my blog while traveling rather than having to save this as a text file and updating my blog later.”

What Drives Consumer Adoption Of New Technologies? I'm participating in a panel discussion this morning during the offsite of a major media company. They sent me a list of questions in preparation of the event. One of the questions was the title of this post; "What drives consumer adoption of new technologies?". free online learning for careers, work, management, business training and education: find materials, articles, ideas, people and providers for teaching, career training, self-help, ethical business education and leadership; for personal, car How is businessballs is organized?... Below is an alphabetical listing of the main categories of information on this website, many of which equate to webpages. Businessballs has many very big webpages containing lots of sub-sections, rather like Wikipedia. Many of the sub-sections may be subjects in their own right.

Rarely say yes to feature requests - Inside Intercom Here’s a simple set of Yes/No questions that you can quickly answer before you add another item to your product roadmap. Saying yes to a feature request – whether it’s a to an existing customer, a product enquiry, a teammate, or a manager – is immediately rewarding. It’s an unspoken transaction where you barter long term product focus in exchange for short term satisfaction. Buying short term joy for the cost of long term pain is the human condition.

Project Tracking for Software Teams Test and deploy your code to production at lightning speed with high-performance pipelines. Start small and scale up as needed. Quickstarts Read more “We moved from month-long deployment cycles to daily deployments […] to 6 data centers worldwide […] We (now) see 4,000 change lists a week, at check-in we run 20K tests and the check-in experience takes about 10 mins.” Read more Designing products for single and multiplayer modes The first million people who bought VCRs bought them before there were any movies available to watch on them. They just wanted to “time shift” TV shows – what we use DVRs for today. Once there were millions of VCR owners it became worthwhile for Hollywood to start selling and renting movies to watch on them. Eventually watching rented movies became the dominant use of VCRs, and time shifting a relatively niche use. Thus, a product that eventually had very strong network effects* got its initial traction from a “standalone use” – where no other VCR owners or complementary products needed to exist.