The 150 Things the World's Smartest People Are Afraid Of 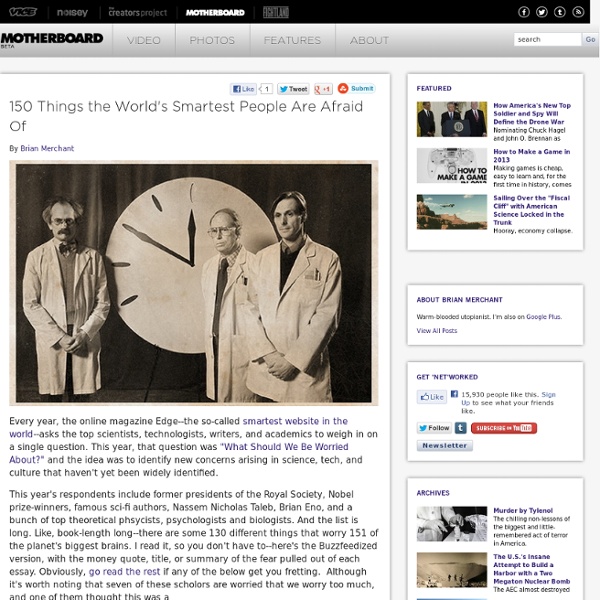 The History of Everyone and Everything - May/June 1999 He invented 'genetic geography' and tracks human migrations around the globe. But critics now charge that Luca Cavalli-Sforza wants to go too far. From the beginning, we humans have refused to stay put. Our earliest wanderings took us out of Africa, the birthplace of our species, and across the globe. Some groups migrating into Asia turned left and colonized Europe, supplanting the Neanderthals who lived there. Others veered right and rambled across Asia, then into Australia or the Americas. Fascinated by these ancient journeys, an Italian scientist in the 1950s had an idea: trace mass migrations not just through archaeological digs, but by tapping into the genetic clues in modern people's blood. Now 77 and an emeritus professor of genetics at Stanford, Cavalli-Sforza is considered one of the world's most distinguished geneticists. How is it, then, that Cavalli-Sforza now finds himself accused of cultural insensitivity, neocolonialism and "biopiracy"? New data?

10 Reasons an Artificial Intelligence Wouldn't Turn Evil Awesome post.. I'm now more afraid of having my limbs chopped off, despite your skilled arguments against such a fate. Some general thoughts on the matter - I see no reason why an AI, or any set of AIs, wouldn't be susceptible to some form of irrationality, or even emotions of a very alien kind. - I tend to fear indifference as a destructive potential in powerful AIs, more than evil. Okay, yeah, if the AI is educated via message boards, we are all nuked.

The Optical Society - Optics and Photonics News & Policy – The Optical Society of America (OSA) Contact: Angela Stark The Optical Society 202.416.1443astark@osa.org Fluorescent light traveling through polymer sheet may lead to user interface devices that respond to gestures alone Image 1: The world's first flexible and completely transparent image sensor. The plastic film is coated with fluorescent particles. Credit: Optics Express. Image 2: A comparison between the (ground truth) image being focused on the sensor surface and the reconstructed image (inset). WASHINGTON, Feb. 20, 2013— Digital cameras, medical scanners, and other imaging technologies have advanced considerably during the past decade. The new imager, which resembles a flexible plastic film, uses fluorescent particles to capture incoming light and channel a portion of it to an array of sensors framing the sheet. For the luminescent concentrator to work as an imager, Bimber and his colleagues had to determine precisely where light was falling across the entire surface of the film. About Optics Express About OSA

10 Golden Lessons from Albert Einstein Every day I remind myself that my inner and outer life are based on the labors of other men, living and dead, and that I must exert myself in order to give in the same measure as I have received and am still receiving - Albert Einstein Albert Einstein was an amazing physicist. He figured out so many universal principles and equations that he was way ahead of his fellow scientists at any point of time. But he is also remembered for another thing; a quality which made people call him a genius: his words. 1. Most people don’t try new things because of their fear of failure. 2. 30 years from now, you won’t possibly remember what chapters you had in your science book; you’d only remember what you learn on your way. 3. When you reflect on how far we humans have come from the prehistoric caves to mind-blowing technological advancements, you would feel the power of imagination. 4. Creativity and uniqueness often depends on how well you hide your sources. 5. 6. 7. 8. 9. 10.

Artificial Intelligence will not kill us all | WISDOMINATION Elon Musk and Stephen Hawking are worried the human race might be replaced by robots. A couple of problems with that: They never said that, until the news got exaggerated (to put it mildly) by clickbait science & tech tabloids.Although they did not say it, others did – and I disagree.It might be a good thing. From the top: such scandalising journalism is enormously irresponsible, because it warps public perception of science and technology into a cartoon, increasing the risk that important research and groundbreaking discoveries with incalculable benefits to human knowledge and well-being will (again) be opposed by misinformed screaming baboons. There is a gigantic difference between “AI researchers agree we need to develop this in beneficial and controlled ways”, which is what the open letter actually says, and “TWO GREATEST MINDS ALIVE SAY ROBOTS WILL KILL US ALL!” Now, onto the second point. An important distinction Strong AI is proper, self-aware* machine intelligence. Why common sense?

InSight team's wearable glass system identifies people by clothes (Phys.org) —Researchers from the University of South Carolina and Duke are proposing a "visual fingerprint" app that can be used with smartphones and wearable camera displays such as Google Glass. Their paper, "Recognizing Humans without Face Recognition," explored techniques that can jointly leverage camera-enabled glasses, an offering that is still in the wings, and phones, to pick out any individual based on what the person is wearing. The team behind the InSight project developed and tested a prototype system that can pick out people by their clothes and other accessories. The system was developed by Srihari Nelakuditi, associate professor of computer science and engineering at the University of South Carolina, along with three colleagues at Duke University, He Wang, Xuan Bao, and Romit Roy Choudhury. How InSight works: A smartphone app creates a person's "fingerprint" by taking a series of pictures of the person. What's the point of the app? What's the limitation?

The Motivation Tool Chest 5 Psychological Experiments That Prove Humanity is Doomed Cracked.com's new book is now on sale. What follows is one of 22 classic articles that appear in the book, along with 18 new articles that you can't read anywhere else. Psychologists know you have to be careful when you go poking around the human mind because you're never sure what you'll find there. Oh, we're not talking about the occasional psychopath who turns up. The Asch Conformity Experiment (1953) The Setup: Solomon Asch wanted to run a series of studies that would document the power of conformity, for the purpose of depressing everyone who would ever read the results. Subjects were told that they would be taking part in a vision test, along with a handful of people. The Result: Questions the subjects were asked were like the puzzle shown here: All they had to do was say which line on the right matched the one on the left. Yet, sadly, 32 percent of subjects would answer incorrectly if they saw that three others in the classroom gave the same wrong answer. "Wait, you're right! C.

Big-Bang Disruption By now any well-read executive knows the basic playbook for saving a business from disruptive innovation. Nearly two decades of management research, beginning with Joseph L. Bower and Clayton M. Christensen’s 1995 HBR article, “Disruptive Technologies: Catching the Wave,” have taught businesses to be on the lookout for upstarts that offer cheap substitutes to their products, capture new, low-end customers, and then gradually move upmarket to pick off higher-end customers, too. When these disrupters appear, we’ve learned, it’s time to act quickly—either acquiring them or incubating a competing business that embraces their new technology. But the strategic model of disruptive innovation we’ve all become comfortable with has a blind spot. That advice hasn’t been much help to navigation-product makers like TomTom, Garmin, and Magellan. The disruption here hasn’t come from competitors in the same industry or even from companies with a remotely similar business model. A Difference in Kind