The Venn Diagram of Irrational Nonsense 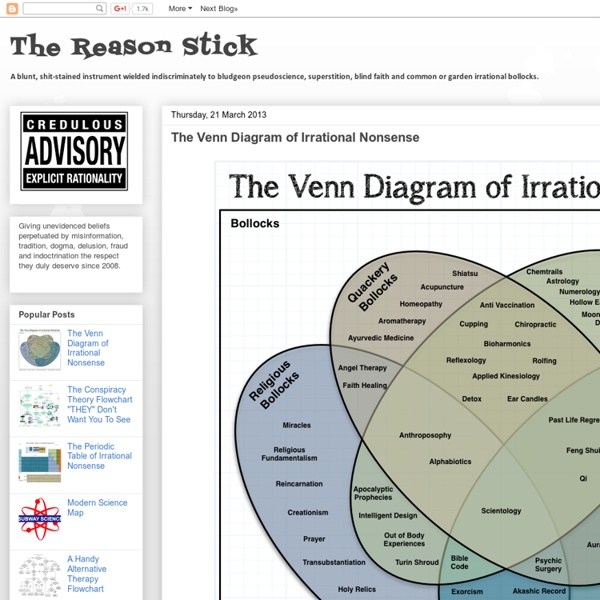 The curiously revered world of irrational nonsense has seeped into almost every aspect of modern society and is both complex and multifarious. Therefore rather than attempt a comprehensive taxonomy, I have opted instead for a gross oversimplification and a rather pretty Venn Diagram. In my gross over simplification the vast majority of the multitude of evidenced-free beliefs at large in the world can be crudely classified into four basic sets or bollocks. Namely, Religion, Quackery, Pseudoscience and the Paranormal. However as such nonsensical beliefs continue to evolve they become more and more fanciful and eventually creep across the bollock borders. Religious Bollocks ∩ Quackery Bollocks ∩ Pseudoscientific Bollocks ∩ Paranormal Bollocks = Scientology UPDATE 24th March 2013 Many thanks for the retweets and shares. I have also received the first translated copy of the Venn Diagram produced by Pavle Močilac of the Croatian Society for Promotion of Science and Critical Thinking. Related:  Science Process

Easterton woman recovers after 'dying for 45 minutes' 23 March 2013Last updated at 09:10 ET Medical support was withdrawn from Mrs Brothers but she is recovering A 63-year-old woman who was expected to die after her heart stopped for 45 minutes, is recovering well. Carol Brothers, from Easterton near Devizes, collapsed outside her home from a heart attack, last month. Paramedics managed to restart her heart and she was airlifted to hospital but her family were told to expect the worst and doctors withdrew medication. Her daughter, Maxine Dickinson, said doctors "put mum on the pathway to die" but days later "she came back to life". Mrs Brothers was returning home from a shopping trip with her daughter when she collapsed, said her husband David. Induced coma "I saw them pull up, the next thing I hear is the daughter screaming at the top of her voice and I couldn't see Carol," he said. "So I shot out there and she was flat out on the floor, just changing colour - a horrible colour and basically I panicked." Continue reading the main story “Start Quote

sScienceMap Terry Pratchett speaks to Fiona Phillips about living with Alzheimer’s On my way to interview Sir Terry Pratchett I tweeted about our meeting. The responses ranged from: “How amazing! He’s a fabulous writer and totally awe-inspiring person”, to “I hope you find him as well as can be expected” and “You and he are both doing so much for dementia”. And that’s why we were meeting. The Discworld author first said he had it in December 2007, just over a year after I’d lost my mum Amy to early-onset Alzheimer’s. It was a particularly bleak period as we were told that my dad Neville also had it. Until then, I’d felt a bit of a voice in the wilderness, going on about the lack of understanding and good care. Terry’s honesty was a eureka moment for me. But it didn’t seem that way when I introduced myself and went to shake his hand. Dressed from head-to-toe in his trademark black, a top hat and frock coat, he looked like an authoritarian Dickensian char­­acter from his Oliver Twist-inspired novel Dodger. When he didn’t offer his hand back my heart sank a little. Daily Mirror

12 Amazing Things Scientists Discovered This Year About People Who Listen to Music In 2014, scientists looked closer than ever before at why exactly music makes us feel so powerfully. And they found some amazing and unprecedented things. Studies revealed that music can shape our personalities and behaviors. It can help us choose our sexual partners. And it can be used to cure certain ailments. The deeper researchers dig, the more we realize how powerful of a force it truly is. And these findings could not have come at a more perfect moment in time: School systems continue to slash arts and music budgets around the country and the war over how much we pay for music is fundamentally a question of how much we value music. Here are 12 amazing things we discovered about music this year: 1. Researchers at Boston Children's Hospital found that early musical training helps children improve their executive functions. Children that started playing music at age 6 showed enhanced activation in the prefrontal cortex, the part of the brain that owns executive functions. 2. 3. 4. 5.

Buy a Ticket. Take the Ride. Maybe it's my age, We old timers like to retreat into the past whenever the here-and-now become just too much to sort out. Which, I suppose, is why I have gravitated back to the 60s by re-reading way too much Hunter S. Thompson. Without going into too much incriminating detail, Hunter and I had a lot in common, back in the day. "The Sixties were an era of extreme reality. Anyway, as I sort through Hunter's drug and alcohol fueled observations of the 60s on forward, I am struck by how much he got right. "In a nation ruled by swine, all pigs are upwardly mobile-and the rest of us are fucked until we can put our acts together: not necessarily to win, but mainly to keep from losing completely. Now is a perfect moment for a strong dose of Hunter. He did, of course, live long enough to witness the Bush era. "It would be easy to say that we owe it all to the Bush family from Texas, but that would be too simplistic. That freedom, the freedom from Dumbness, continues to erode.

Procedure [Types of Variables] [Activity #1] [Activity #2] [Activity #3] [Steps to Success] [Move Beyond] You're doing great! You've chosen a topic and asked a question. You've done a little bit of research and made a best guess as to what the answer might be. Now it's time to design your experiment. The first step is to write the procedure. The procedure is a set of very specific instruction about how you are going to conduct your experiment. Sadly, no one could eat the sandwich on the left. Variables Details also help to control variables in your experiment. Independent Variable The independent variable is the one that YOU choose to help you answer your question. If there's more than one independent variable, the experiment becomes flawed because you can't be sure what caused the changes you observed. Activity #1: Start Thinking! Look at the image to the right. Take some time to think about how this student might write the procedure for this experiment: What are the controlled variables?

The Skeptic's Dictionary Done for You Systemization - Work the System A Shortcut to Your Next Major Breakthrough. For months, maybe even years, you’ve had my book. As you know, it describes how I went from a prisoner of my business to the master of it. How I went from 80+ hour workweeks to working only 2 hours per week. How I went from near-bankruptcy and teetering on poverty, to living in the Top-1% of income earners in the USA. The solution? Is my book sitting on your shelf gathering dust? How come? If you’d like to systemize your business, but you never seem to get around to it, please keep reading. Below I’ll explain how we will systemize your business FOR YOU. In the beginning, writing Procedures for your entire company is serious Heavy Lifting! Let’s face it. And so, it’s a good possibility it’s not going to happen at all! When we consult with business owners, this #1 concern comes up over and over again: “I know I need procedures to free up my time, but I don’t have time to create them.” What a cruel, vicious cycle. Damned if you do. Maybe. Ask yourself:

The Energetics of Psychopathy Picture: Anna Bal (CC) Do you remember the scene in The Green Mile when death row inmate John Coffee is touched by murderer “Wild Bill”? After feeling some powerful negative energy, he says, “You a bad man.” Are you like John Coffee? Would you know it if you brushed up against a cold-blooded killer? You might if you’re what Dr. I began to sense energy emanating from people when I was around 20 or 21 years old. People have energy emanating from them and this energy circulates around. Some people may start out hostile at first but then warm up. A conversation is an exchange of energy. This exchange of energy between two normal people having a friendly conversation is for the most part unconscious. Suddenly you feel energized. Psychopaths are a tribe of one. The unease that most people feel when talking with a psychopath is mostly unconscious, but one thing some people often pick up is that their smile does not match their eyes. Our exchange felt like vampirism: I was drained of my energy.

Understanding Science: An overview To understand what science is, just look around you. What do you see? Perhaps, your hand on the mouse, a computer screen, papers, ballpoint pens, the family cat, the sun shining through the window …. Science is, in one sense, our knowledge of all that — all the stuff that is in the universe: from the tiniest subatomic particles in a single atom of the metal in your computer's circuits, to the nuclear reactions that formed the immense ball of gas that is our sun, to the complex chemical interactions and electrical fluctuations within your own body that allow you to read and understand these words. But just as importantly, science is also a reliable process by which we learn about all that stuff in the universe. However, science is different from many other ways of learning because of the way it is done.

The Science Creative Quarterly & A DIALOGUE WITH SARAH, AGED 3: IN WHICH IT IS SHOWN THAT IF YOUR DAD IS A CHEMISTRY PROFESSOR, ASKING "WHY" CAN BE DANGEROUS SARAH: Daddy, were you in the shower? DAD: Yes, I was in the shower. SARAH: Why? DAD: I was dirty. DAD: Why does the shower get me clean? SARAH: Yes. DAD: Because the water washes the dirt away when I use soap. DAD: Why do I use soap? DAD: Because the soap grabs the dirt and lets the water wash it off. DAD: Why does the soap grab the dirt? DAD: Because soap is a surfactant. DAD: Why is soap a surfactant? DAD: That is an EXCELLENT question. DAD: Why does soap form micelles? DAD: Soap molecules are long chains with a polar, hydrophilic head and a non-polar, hydrophobic tail. SARAH: Aidrofawwic DAD: And can you say ‘hydrophobic’? DAD: Excellent! DAD: Why does it mean that? DAD: It’s Greek! SARAH: Like a monster? DAD: You mean, like being afraid of a monster? DAD: A scary monster, sure. (pause) SARAH: (rolls her eyes) I thought we were talking about soap. DAD: We are talking about soap. (longish pause) DAD: Why do the molecules have a hydrophilic head and a hydrophobic tail? DAD: That’s complicated.

Online Courses from the World's Experts The first time Andrew went out to raise money for his first product idea, he burnt through months, making every mistake it was possible to make, trying to get investors to say "Yes" while working 18 hour days to pay the bills. It really wasn't very pretty... After falling on his face over and over, Andrew managed to get six guys to back him and give him his first $250K. Since that fateful day, Andrew has raised over $20M of funds but his real passion has been helping entrepreneurs and companies start cool companies and to lock in funding. In fact, during a four year project in the United Kingdom, Andrew helped the UK Government, by working alongside other funding leaders as part of the Investment Taskforce focused on creating a better new Business Start-Up environment. Selected from over 2000 entrepreneurial candidates applying through the Financial Times, Andrew joined the Department of Trade and Industries’ Board of the Small Business Council and the Investment Task Force.