An Interactive Guide To The Fourier Transform 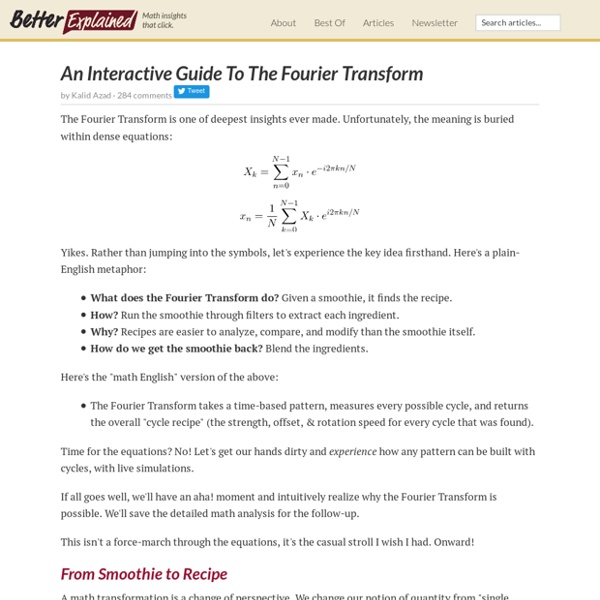 The Fourier Transform is one of deepest insights ever made. Unfortunately, the meaning is buried within dense equations: Yikes. What does the Fourier Transform do? Here's the "math English" version of the above: The Fourier Transform takes a time-based pattern, measures every possible cycle, and returns the overall "cycle recipe" (the strength, offset, & rotation speed for every cycle that was found). Time for the equations? If all goes well, we'll have an aha! This isn't a force-march through the equations, it's the casual stroll I wish I had. From Smoothie to Recipe A math transformation is a change of perspective. The Fourier Transform changes our perspective from consumer to producer, turning What did I see? In other words: given a smoothie, let's find the recipe. Why? So... given a smoothie, how do we find the recipe? Well, imagine you had a few filters lying around: We can reverse-engineer the recipe by filtering each ingredient. Filters must be independent. See The World As Cycles Oh!

Lateral Thinking Puzzles - Preconceptions Lateral thinking puzzles that challenge your preconceptions. 1. You are driving down the road in your car on a wild, stormy night, when you pass by a bus stop and you see three people waiting for the bus: 1. An old lady who looks as if she is about to die. 2. An old friend who once saved your life. 3. Knowing that there can only be one passenger in your car, whom would you choose? Hint: You can make everyone happy. Solution: The old lady of course! 2. Hint: The police only know two things, that the criminal's name is John and that he is in a particular house. Solution: The fireman is the only man in the room. 3. Hint: He is very proud, so refuses to ever ask for help. Solution: The man is a dwarf. 4. Hint: It does not matter what the baby lands on, and it has nothing to do with luck. Solution: The baby fell out of a ground floor window. 5. Hint: His mother was an odd woman. Solution: When Bad Boy Bubby opened the cellar door he saw the living room and, through its windows, the garden. 6. 7.

Spirals What is a spiral? A spiral is a curve in the plane or in the space, which runs around a centre in a special way. Different spirals follow. Most of them are produced by formulas. Spirals by Polar Equations top Archimedean Spiral topYou can make a spiral by two motions of a point: There is a uniform motion in a fixed direction and a motion in a circle with constant speed. You get formulas analogic to the circle equations. SpiralThe radius r(t) and the angle t are proportional for the simpliest spiral, the spiral of Archimedes. If you connect both spirals by a straight (red) or a bowed curve, a double spiral develops. Equiangular Spiral (Logarithmic Spiral, Bernoulli's Spiral) top More Spirals topIf you replace the term r(t)=at of the Archimedean spiral by other terms, you get a number of new spirals. I chose equations for the different spiral formulas suitable for plotting. Clothoide (Cornu Spiral) top Spirals Made of Arcs topHalf circle spirals Spirals Made of Line Segments top German D.H.O. top