Stuff No One Told Me 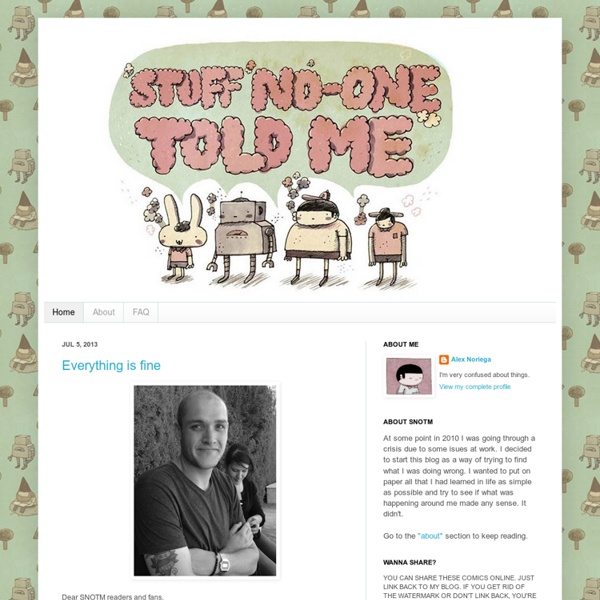 Dear SNOTM readers and fans, I am very much alive... I've just not been drawing many comics because Iris and I have been traveling a lot lately. We spent a few months in Spain visiting my family and walking the Camino de Santiago (by the way, it was awesome). As of now, our current residence is in Sao Paulo, Brazil... and I think we'll be staying here for a few years. I don't know if new comics will come anytime soon.

Shout works Shout (aka Alessandro Gottardo) Illustratorconceptualillustration@gmail.com / Skype: alessandro.gottardo Prev 1 2 3 4 5 ... Next Top page Copyright © Shout, all rights reserved. Web design by Franco Cervi, engineering and hosting by Mitric. The Beginner’s Guide to Zen Habits – A Guided Tour By Leo Babauta I know a lot of people who fall into a slump, losing the habit of exercise, procrastinating with work, slipping into a bad diet, and generally not feeling motivated. It’s hard to get out of a slump like that. It’s hard to get going again, to get started when all the forces of inertia are against you. Here’s how to get started, in just a few easy steps.

Perception - StumbleUpon . . . Something To Think About. . . Washington, DC Metro Station on a cold January morning in 2007. The man with a violin played six Bach pieces for about 45 minutes. During that time approx. 2 thousand people went through the station, most of them on their way to work. After 3 minutes a middle aged man noticed there was a musician playing. 10+ “Oh No” Comics That Perfectly Sum Up Your Life As An Adult UK-based artist Alex Norris is making comics cool again with his "Oh No" series, a gloriously awkward take on life's realest struggles. Show Full Text These 3-panel wonders, uploaded to a page known as "Webcomic Name", started appearing on Tumblr over the summer. The star is a little pink blob who faces everyday challenges and annoyances, from social anxiety to dirty contact lenses, but fails in hilarious ways and delivers its trademark punchline - oh no. "Webcomic Name is partly a parody of the extremely self-aware negative culture that has been popular on the internet for a while." Alex told Bored Panda.

Starving Artist Recipes I used to live in Seattle and one of the big things I miss about that city is Tom Douglas’s Serious Pie restaurant. It is seriously intense, with their stone-encased applewood burning ovens, exclusive charcuterie, and artisan cheeses. But my fav is their Yukon Gold Potato with Rosemary and Pecorino Romano Pizza. While flights from LA to Seattle aren’t super expensive, making this pizza (or as close to it as possible) is a better alternative. 15 Things Highly Confident People Don't Do Highly confident people believe in their ability to achieve. If you don’t believe in yourself, why should anyone else put their faith in you? To walk with swagger and improve your self-confidence, watch out for these fifteen things highly confident people don’t do.

Tips For A Better Life - Ham and Heroin Take a 10-30 minutes walk every day. Sit in silence for at least 10 minutes each day. Sleep for 7 hours. Live with the 3 E’s — Energy, Enthusiasm, and Empathy. Play more games. The price for ridding society of bad is always high In June of 1945, this striking letter arrived at the home of 3-year-old Dennis Helms in Washington, written on a sheet of Adolf Hitler's letterhead. It had been penned by his father, Lt. Richard Helms, an intelligence operative with the OSS who, following Germany's surrender the month before, had managed to acquire some of the recently-deceased Nazi leader's stationery from the Reich Chancellery.