The Online Learning Blog from Study2U 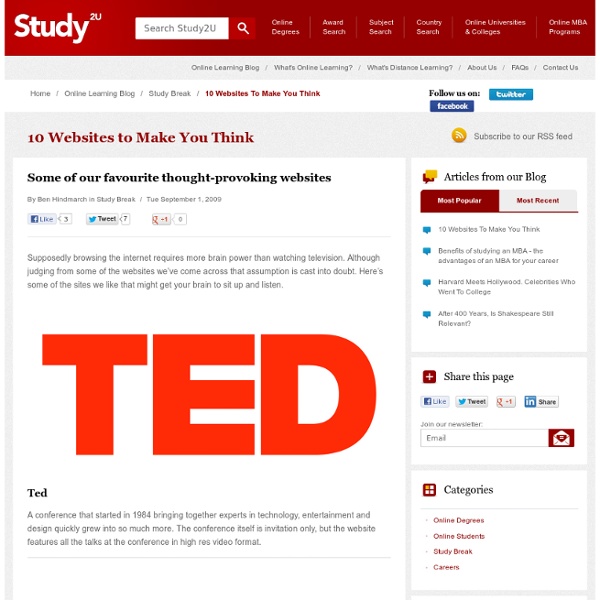 Supposedly browsing the internet requires more brain power than watching television. Although judging from some of the websites we’ve come across that assumption is cast into doubt. Here’s some of the sites we like that might get your brain to sit up and listen. Ted A conference that started in 1984 bringing together experts in technology, entertainment and design quickly grew into so much more. The conference itself is invitation only, but the website features all the talks at the conference in high res video format. New Scientist The New Scientist website carries new articles from the magazine as well as the NS archive of over 76,000 pieces. Big Think The Big Think website is a collection of ‘global thought leaders’ who offer their thoughts and analysis on world events and other important developments. Café Scientifque ‘for the price of a cup of coffee or a glass of wine, anyone can come to explore the latest ideas in science and technology’ Breathing Earth Arts & Letters Daily How Stuff Works

Correlation vs. Causation (A Mathographic) As part of our quest to understand the Algorithm, we do a lot of correlation analysis here at SEOmoz. We tend to dive right into the deep end, so I thought it might be a good time to take a step back and talk about the absolute basics of correlation, including some warnings about causation. We’ll often say (and hear) the fallback phrase – “correlation does not imply causation”, but people rarely dig into what that means. To make this experience as pleasant as possible for the math-phobic, I drew you a picture.

20 Obsolete English Words that Should Make a Comeback Photo: Katherine Hodgson If we all start using them, these words can be resurrected. DURING MY UNDERGRADUATE studies as a Linguistics major, one of the things that struck me most is the amazing fluidity of language. New words are created; older words go out of style. Words can change meaning over time, vowel sounds shift, consonants are lost or added and one word becomes another.

How Time Crystals Could Rewrite The Rules Of Physics If you overheard someone talking about time crystals in a bar, you’d think they were mad, or drunk. Or both. These things, theoretically, oscillate for eternity without any energy input whatsoever — and if that sounds like a perpetual motion machine, it’s because it is. Impossible, right? But what if it was a Nobel prize-winning physicists making the suggestion? 6 Questions That Will Make You Fee Peaceful and Complete “The best place to find a helping hand is at the end of your own arm.” ~Swedish Proverb When I was in my mid-twenties an unhealthy relationship with an unhealthy guy sent me packing off to the corner of New Mexico to find myself. In a new age, self-discovery kind of world—a hubbub of a town filled with people in transition—I was graced to meet many powerful healers, gurus, shamans, and teachers.

The Quick 10: Little-Known Second Verses of Children’s Songs Either I had a really short attention span as a kid and never made it past the first verse of a song (which is entirely possible), or there are some obscure lyrics to the songs we all know and love. Here are a few examples. 1. Google Offers A Carrot/Stick For Marketers To Go Mobile Google is increasingly trying to send advertisers a message about how critical mobile is becoming. As an example the company recently estimated that a huge percentage of last-minute shopping search (44 percent) this holiday will be on smartphones and tablets. Despite predictions like this and recent survey data showing enterprises are pouring money into mobile marketing, the majority of brands and advertisers still don’t have an optimized mobile presence. Although Google says that “the number of advertisers running mobile specific campaigns has more than doubled since January,” a large percentage are sending people to pages that don’t look good on smartphones.

COMEX Preview: Some gadgets to look out for! Today marks the start of COMEX 2011, and like every COMEX show that preceded this year's, brands and manufacturers are trying to elbow each other out with deals, deals and more deals! We don't know the full extent of the promotions that will be present at COMEX yet, but here is a short list of gadgets that you must check out if you count yourself an aficionado. Of course, we'll be on site tomorrow to sniff out the best deals, so keep your eye on Tech Talk! Xbox 360 trade-in offer Got an old console that you're just looking for an excuse to get rid of? (As if.

The 20 Best Books for Language Lovers » Online College Search Seeing as how the entirety of organic history exists thanks to communication — even rudimentary chemical exchanges between cells qualify — it makes perfect sense that many find the concept utterly engaging. Language pervades everything, building and destroying as time marches ever forward. And while even the most learned scholars can't even begin to fully explain its physiology, origins, structures and pretty much every other component, they've certainly done a pretty lovely job scratching the surface.