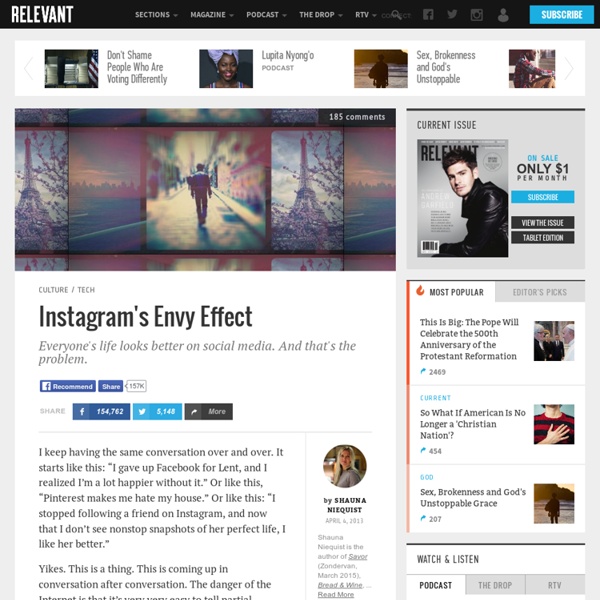 I keep having the same conversation over and over. It starts like this: “I gave up Facebook for Lent, and I realized I’m a lot happier without it.” Or like this, “Pinterest makes me hate my house.” Or like this: “I stopped following a friend on Instagram, and now that I don’t see nonstop snapshots of her perfect life, I like her better.” Yikes. I’m not anti-technology or anti-Internet, certainly, but I do think it’s important for us to remind ourselves from time to time that watching other peoples’ post-worthy moments on Facebook is always going to yield a prettier version of life than the one you’re living right now. When you’re waiting for your coffee to brew, the majority of your friends probably aren’t doing anything any more special. My life looks better on the Internet than it does in real life. Because community—the rich kind, the transforming kind, the valuable and difficult kind—doesn’t happen in partial truths and well-edited photo collections on Instagram. I’m a writer.

How Some Kids With A Van Are Changing The Pro-Life Movement - Live Action News & Opinion David Pomerantz On March 13, in Dallas, TX, an organization you’ve probably never heard of is going to revolutionize the pro-life movement. It starts with a kid from Philly, a bus in New York, and an idea that brought him quite by accident to the city where Roe v. Wade started — the city where he hopes abortion will finally meet its match. David Pomerantz, 23, does not look like a pro-lifer or a practicing Christian. A polite, friendly young man with a laconic kid-from-nowhere accent and a direct blue gaze, David Pomerantz — “Dave” to his friends — does not jibe with the stereotypical image of the angry activist holding signs outside a clinic. He hails from Philadelphia, but he was attending Word of Life, a two-year Bible institute in New York, when he met Chris Slattery and Julie Beyel of EMC (Expectant Mother Care), a Manhattan pregnancy resource center. EMC had a bus equipped with a sonogram machine. Save the Storks was born. “We don’t want to intimidate anyone. “Hi, how are you?

Blog — The Battle We Didn't Choose Two years ago today Jennifer passed after facing breast cancer for less than 4 years. Jen was diagnosed 5 months after our wedding. I still remember the sound of Jen’s voice coming through the phone as she told me she had cancer. I was numb, a feeling that has been constant ever since that moment. Since Jen’s death I have been piecing myself back together and I’m learning that now the pieces are all different. Everything I thought I knew has been challenged and I spend a lot of time questioning myself and my actions. Lately these questions have led me back to Jennifer’s last days. There were moments of total peace and happiness. But day after day family and friends streamed through our home. Jen’s nails were done, fingers and toes. I watched Jen as she gave a final “I Love You,” and said farewell to family and friends. One night after everyone had gone home, except for the Hospice Nurse, I asked Jen how she touched so many people. I think of this every day. Peace

Timeline Photos Victoria's Secret Model Kylie Bisutti Quits Modeling and Turns to God; Launching Christian Clothing Line (PHOTO:Facebook/Kylie Bisutti)Kylie Bisutti quits modeling to become Proverb's wife. April 25, 2013|11:37 am "I was being paid to strip down and pose provocatively to titillate men. It wasn't about modeling clothes anymore; I felt like a piece of meat," Bisutti said during a recent interview while recalling her career as a Victoria's Secret model. After winning the "Angel Search" competition by Victoria's Secret, Bisutti's career as a model pushed forward at full speed. But instead of feeling like she was on top of the world, the 19-year-old newlywed did not feel right. A number of events would occur after that moment that would motivate Bisutti to quit her career as a model. "At the time, a Victoria's Secret lingerie show was airing on TV, and I was looking at Twitter and saw loads of tweets from women comparing themselves to the impossible image of the models," she told the Post. The moment inspired her to go public about her renewed commitment to God. Follow us

Reading the Red-Flags Getting to know someone for marriage can be a nerve-racking and an exciting experience all at the same time. Through conversations, a couple seeks to learn about each other and determine compatibly for a lifetime together. However, many couples get so emotionally attached in the early stages of the relationship that they cannot see or choose to deny red flags that arise. Being self-reflective and in tune with your feelings is important in identifying potential problems in a relationship. Communication before marriage is vital because it is the only way one can connect with a potential spouse and understand his or her viewpoints. On the other hand you may feel like thoughts and feelings are shared and heard, but your potential spouse does not share his or her own views and feelings. The way a couple communicates and resolves conflicts are important aspects to consider before marriage.

One Meal One Day | Get Involved Compassion International share this tweet this email this Thank you for skipping a meal and helping children in extreme poverty! Join the One Meal One Day community. This ensures you stay in the loop with what's happening. Donate your skipped-meal money. Compassion prefers online donations by credit card, but we will gladly accept other forms of payment too. Donate with a credit card Or you can: Mail a check. Spread the word! Sexy Legs Workout Posted by Cags R under Fitness & Training on 21 November 2012 at 1:00 AM With the holiday season fast approaching, you want to make sure your thighs and calves look hot in the tights for your elf costume - right fellas? That's why this week we're challenging you to this fast and effective bodyweight workout which will strengthen your legs - and as we all know, strong is sexy! Check out how to make the most of this workout for your lower abs, glutes and legs with this guide: how to perform exercises for the sexy legs workout and add the workout to your training now! Get more advice and Challenge ideas by signing up to Tribesports - it's free, fun and most importantly fitness focused!

The Fiqh of Facebook Islam and the Internet Series: Intro | Part I | Part II | Part III | Part IV | Part V | Part VI | Part VII | Part VIII | Part IV By Sohaib Saeed Online pursuits are consuming an increasing amount of time of young people, and no less the Muslims. Those among the 500 million global users of Facebook (FB) know how it functions as a platform for many of these activities (such as news, entertainment, correspondence, campaigning, da`wah), going far beyond its description of a social networking site. As an avid Facebook user of a few years, I have tasted its fruits but also experienced the sickness of excess and felt the danger of getting lost among the trees. If I dwell here on the potential and actual problems with Muslims’ use of Facebook, that is not to de-emphasize the great things that can be done with it. A Question of Time If time is life, then Facebook is many people’s favorite weapon of suicide. What are the signs of excess? Public and Private 1. 2.

Where did the term just joshing you come from "Just joshing you" came from the late 1800's and has a very interesting story behind it! Josh Tatum was a deaf mute, but a very enterprising young man from the Midwest. In 1883 the US Mint came out with a new nickel. It was deemed the Liberty Head Nickel and on the reverse side had a large roman numeral V stamped on it. With the help of a friend familiar in gold electroplating base metal, they turned these coins into a figurative gold mine. The Law prosecuted him but ironically he was found not guilty on the most serious charges, because he only purchased items that totaled 5 cents, and because he was deaf & could not speak he never represented that it was a new $5.00 gold piece. The same year, the US mint added the word "cents" to the Liberty Head Nickle in an effort to bring this type of fraud to a halt. Hence the famous saying "you're not Joshing me are you"?