A Lesson on Forgiveness 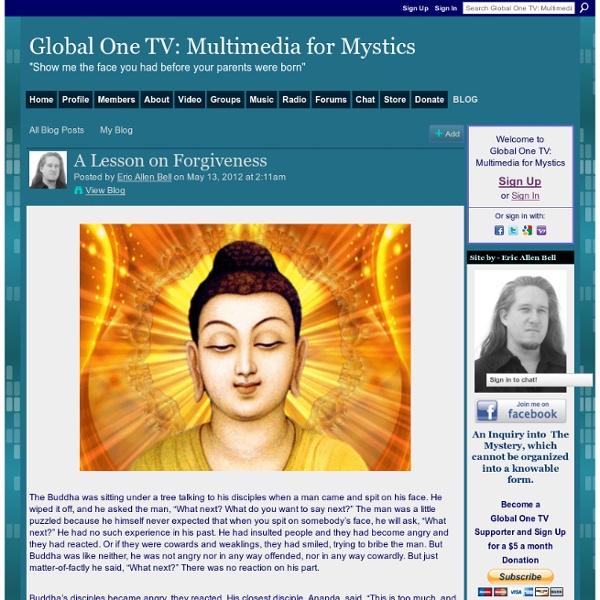 The Buddha was sitting under a tree talking to his disciples when a man came and spit on his face. He wiped it off, and he asked the man, “What next? What do you want to say next?” The man was a little puzzled because he himself never expected that when you spit on somebody’s face, he will ask, “What next?” He had no such experience in his past. He had insulted people and they had become angry and they had reacted. Buddha’s disciples became angry, they reacted. Buddha said, “You keep silent. “If you think on it deeply,” Buddha said, “he has spit on his own mind. The man was even more puzzled! Puzzled, confused, the man returned home. The next morning he was back there. The man looked at Buddha and said, “Forgive me for what I did yesterday.” Buddha said, “Forgive? “And you also are new.

Taoism Taoist rite at the Qingyanggong (Bronze Ram Temple) in Chengdu, Sichuan. Taoism, or Daoism, is a philosophical, ethical, and religious tradition of Chinese origin that emphasizes living in harmony with the Tao (also romanized as Dao). The term Tao means "way", "path" or "principle", and can also be found in Chinese philosophies and religions other than Taoism. The Online Learning Blog from Study2U Supposedly browsing the internet requires more brain power than watching television. Although judging from some of the websites we’ve come across that assumption is cast into doubt. Here’s some of the sites we like that might get your brain to sit up and listen.

Stuff No One Told Me Pictures Artist Alex Noriega has lived a fascinating life. The Barcelona-born designer currently lives in Mozambique, and he has learned some hard lessons in between. As he writes on his blog "Stuff No One Told Me": "At some point in 2010 I was going through some crisis at work, so I decided to start this blog as a way of trying to find what I was doing wrong. I wanted to put on paper all that I had learned as simple as possible and try to see if what was happening around me made sense. 6 Questions That Will Make You Fee Peaceful and Complete “The best place to find a helping hand is at the end of your own arm.” ~Swedish Proverb When I was in my mid-twenties an unhealthy relationship with an unhealthy guy sent me packing off to the corner of New Mexico to find myself. In a new age, self-discovery kind of world—a hubbub of a town filled with people in transition—I was graced to meet many powerful healers, gurus, shamans, and teachers. I became a workshop junkie.

5 Tibetans Energy Rejuvenation Exercises We've been practicing, teaching and recommending the 5 Tibetan Energy Rejuvenation Exercises since 1998. You can do the whole routine in 15 minutes and only need enough floor space for your body while laying down and enough air space for your arms to be outstretched. The 5 Tibetans represent a great way to keep your body in shape when you have limited time for a physical workout or limited space for a complete yoga routine.

Winnie the Pooh Winnie the Pooh has a certain way about him, a way of doing things which has made him the world's most beloved bear. And Pooh's Way, as Benjamin Hoff brilliantly demonstrates, seems strangely close to the ancient Chinese principles of Taoism. The 'Tao of Pooh' explains Taoism by Winnie the Pooh and explains Winnie the Pooh by Taoism. It makes you understand what A.A. Milne probably meant when he said he didn't write the Pooh-books for children in the first place. Mistakes Introverts Make We are all so very wonderful and yet--I'm sorry, but it must be said--we are not perfect. This blog has focused mostly on staking out turf in our culture for introverts , but now it's time to consider some things related to our introversion that might be interfering with our relationships and accomplishments. Many or most of us have probably made some of these mistakes at one time or another.

The Egg The Egg By: Andy Weir You were on your way home when you died. It was a car accident.