The Psychology of Getting More Done (in Less Time) 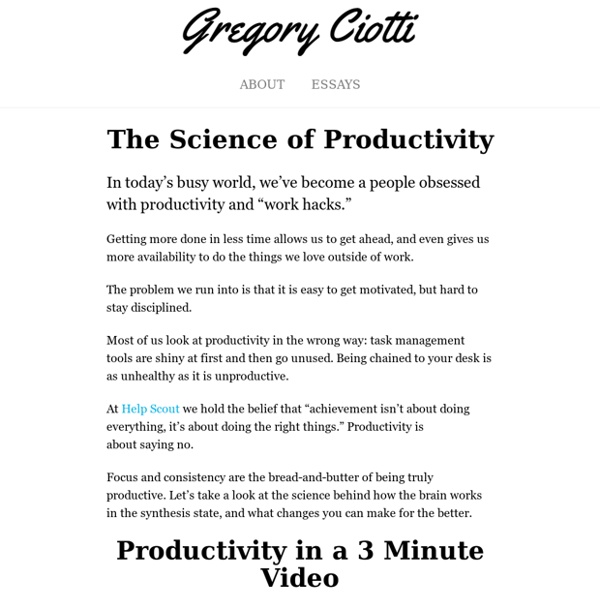 In today’s busy world, we’ve become a people obsessed with productivity and “work hacks.” Getting more done in less time allows us to get ahead, and even gives us more availability to do the things we love outside of work. The problem we run into is that it is easy to get motivated, but hard to stay disciplined. Most of us look at productivity in the wrong way: task management tools are shiny at first and then go unused. At Help Scout we hold the belief that “achievement isn’t about doing everything, it’s about doing the right things.” Focus and consistency are the bread-and-butter of being truly productive. Productivity in a 3 Minute Video I collaborated with Mitchell Moffit of the ASAPscience team to create the above video. Click play to learn… Why worrying about having “more willpower” is a fool’s game.How world class experts stay productive… and what they do differently.The reason why better energy management = a more productive you.Big pitfalls that lead to busywork and procrastination. Related:  Food for thought

Rarity of Quiet | Corned Beef Hashtag It starts at 6 a.m. with the alarms that wake us up. Then the television goes on for the news, because so much has probably changed in the four or five hours that, maybe, I’ve been asleep. The coffee maker gurgles and burps in the background. The toaster pops and the skillet sizzles. The car rumbles to a start, the heater roars as it blows the still cold air through the vents. The traffic of the morning rush is heavy and the other drivers whoosh past me in their vehicles. Turning into the residential area that the school is in and the birds are chirping amid the thrum of cars riding over speed humps. I arrive back at the house, greeted by the barking of the dogs. My evening is spent yelling to be heard over the clanking of pans, the rattle of plates being stacked and unstacked, and the calls of the other cooks; beyond it all is the incessant, maddening, rhythmic throb of the exhaust hood. Finally at home, things are still. The silence rolls in. Like this: Like Loading...

How to Be Happy (Research) While happiness is defined by the individual, I’ve always felt it foolish to declare that nothing can be learned from observing the happiness of others. Examining how to be happy is benefitted from observing the patterns of others, and then taking only what you find useful. Inspiration is the goal, not rigid rules on being happy. I’ve gone over dozens of research papers in the pursuit of learning more about the subject — happiness in work and life is a topic to take seriously, so I’m always on the hunt for inspiration and insight. Below I’ll cover a few of my favorite studies. 1. Humility is not thinking less of yourself, but thinking of yourself less. Thoughtful words from C.S. For instance, a variety of research suggests that self-esteem that is bound to external success can be a fickle beast — certain students who tied their self-esteem to their grades experienced small boosts when they received an acceptance letter (grad school), but harsh drops in self-esteem when they were rejected.

How do you find the best mentor for you? Mentors have been essential for me. No matter how many books you read or how much time you spend researching on the web, mentors are still a crucial part of learning in any arena. So how do you find a great one? Daniel Coyle goes through the research in his excellent book The Little Book of Talent: 52 Tips for Improving Your Skills and pulls together five points: 1) Avoid Someone Who Reminds You of a Courteous Waiter …one who focuses his efforts on keeping you comfortable and happy, on making things go smoothly, with a minimum of effort… This is a good person to have as your waiter in a restaurant, but a terrible person to have as your teacher, coach, or mentor. 2) Seek Someone Who Scares You a Little Look for someone who: Watches you closely: He is interested in figuring you out— what you want, where you’re coming from, what motivates you. Is honest, sometimes unnervingly so: He will tell you the truth about your performance in clear language. 3) Seek Someone Who Gives Short, Clear Directions

ohdeardrea: How To Have A Great Life Without Spending A Lot Of Money + Saving Some Too I'd like to think I might be an expert in this category, but I'm not sure what gives anyone expert status on these things. I mean, I'm not a financial or money expert of any sort. In reality, I don't like to talk about money--- so this really is not a post on how to get rich in money, but how we live our good (great) life. We're a middle class family with two incomes. We're not rich. Don't buy disposable products. Don't buy cheap crap. Invest in expensive things (sometimes). Invest in classic things (always) I have four, six, and eight+ year old pairs of shoes that still look good--- and not because they've been sitting in a closet--because believe me they've been danced in, ran in, partied in, played in, etc. Buy some things second hand.I wrote about this before. Buy a house. You don't need a big one (a house that is). If you don't have money, don't spend it. Make stuff. Eat leftovers + meal plan. Don't buy processed foods. Drink water. Love your home. Plant a garden. Don't rush.

Handbook for Life: 52 Tips for Happiness and Productivity By Leo Babauta This is something I’ve been wanting to write for some time — a Handbook for Life. Now, is there any handbook that can be a guide to every single person? Of course not. This is just a list of tips that I think will help many people in life — some of them common-sense tips that we often forget about. Consider this guide a reminder. It’ll also become apparent from the links in this handbook that I’ve written about this stuff before. How to use this handbook This handbook is not meant to be a step-by-step guide, nor should you adopt all the tips below. Pick and choose the tips that will be most useful to you. 52 Tips for Happiness and Productivity Try rising early. 6 Ways to Get Me to Email You Back

The High Cost Of Acting Happy List of English-language idioms This is a list of notable idioms in the English language. An idiom is a common word or phrase with a culturally understood meaning that differs from what its composite words' denotations would suggest. For example, an English speaker would understand the phrase "kick the bucket" to mean "to die" – and also to actually kick a bucket. Furthermore, they would understand when each meaning is being used in context. Visit Wiktionary's Category for over eight thousand idioms. See also[edit] References[edit] Jump up ^ "A bitter pill". Notes[edit] Jump up ^ Originally a hunting term.Jump up ^ Originally a British slang term for a quadruple amputee during World War I.Jump up ^ Originating with the English writer Francis Quarles who wrote:"Wee spend our mid-day sweat, or mid-night oyle;Wee tyre the night in thought; the day in toyle."

How to network They say networking is vital but nobody explains how to network How to network is the real question. But first, in case you’re a doubter, some quick proof that networking is essential: Research shows networking is essential to staying employed, salary growth and job satisfaction.It makes you more likely to get a job. Via Malcolm Gladwell’s The Tipping Point: How Little Things Can Make a Big Difference: In his classic 1974 study Getting a Job, Granovetter…found that 56 percent of those he talked to found their job through a personal connection. More likely to be successful in a job. Via The Happiness Advantage: The Seven Principles of Positive Psychology That Fuel Success and Performance at Work: MIT researchers…found that the more socially connected the IBM employees were, the better they performed. And more likely to be creative on the job. Via Imagine: How Creativity Works: So why aren’t there any good resources on the nitty gritty of how to network? 1. 2. 3. 4. 5) Just be a friend Tags:

18 Things Highly Creative People Do Differently This list has been expanded into the new book, “Wired to Create: Unravelling the Mysteries of the Creative Mind,” by Carolyn Gregoire and Scott Barry Kaufman. Creativity works in mysterious and often paradoxical ways. Creative thinking is a stable, defining characteristic in some personalities, but it may also change based on situation and context. Neuroscience paints a complicated picture of creativity. And psychologically speaking, creative personality types are difficult to pin down, largely because they’re complex, paradoxical and tend to avoid habit or routine. “It’s actually hard for creative people to know themselves because the creative self is more complex than the non-creative self,” Scott Barry Kaufman, a psychologist at New York University who has spent years researching creativity, told The Huffington Post. While there’s no “typical” creative type, there are some tell-tale characteristics and behaviors of highly creative people. They daydream. They observe everything.

31 Low-Cost Ways To Promote Your Business by Janet Attard Starting a business on a shoestring? Looking for ways to stretch your small business marketing budget? Here are 32 low-cost, high-impact methods to advertise and promote your business. What's the best way to promote your business? Promoting a business is an ongoing challenge for small businesses. Plan your attack. Set your business profile or page up on LinkedIn, Facebook, Google Plus and Twitter. Find dozens of additional small business marketing ideas in our marketing channel. © 2015 Attard Communications, Inc. *Business Know-How is a Solution Provider and Authorized Local Expert for Constant Contact

The science behind optimizing a productive work environment 1.9K Flares Filament.io 1.9K Flares × I’ve written about how creativity works in the brain before, and I found it really useful to understand this process. Or, I should say, multiple processes. There’s so much going on in the brain during creativity that science is still trying to pin down exactly how it all works. What we do know is which three parts of the brain work together to help us create and come up with new ideas: The Attentional Control Network helps us with laser focus on a particular task. The Imagination Network as you might have guessed, is used for things like imagining future scenarios and remembering things that happened in the past. The Attentional Flexibility Network has the important role of monitoring what’s going on around us, as well as inside our brains, and switching between the Imagination Network and Attentional Control for us. You can see the Attentional Control Network (in green) and the Imagination Network (in red) in the image below.

Freelancing an Art or Commodity? There’s a debate online (and probably offline too) that divides writers, designers and more into two camps: those who consider their work a trade, and those who consider their work an art form. Now, for those of you who know me or have read older posts on this site, you’ll know that I firmly sit in the “writing is a trade” camp and disdain calling what I do for a living an art. It’s a career. It brings me income. It’s a business. It’s not William Shakespeare or Leonardo DaVinci. I don’t make a point of fighting to convince those that call themselves artists that they aren’t. One such discussion can be found right here: Are Freelancers a Commodity or a Profession? The post debated whether job auction sites like Elance devalue professional work. I won’t repeat them here. The majority of comments reflected a pretentious, arrogant mindset. Let me clue these people into some very important facts: More importantly, buyers don’t CARE. They want results. Let’s be realistic here. Alright, thinks Joe.