How to Get Startup Ideas 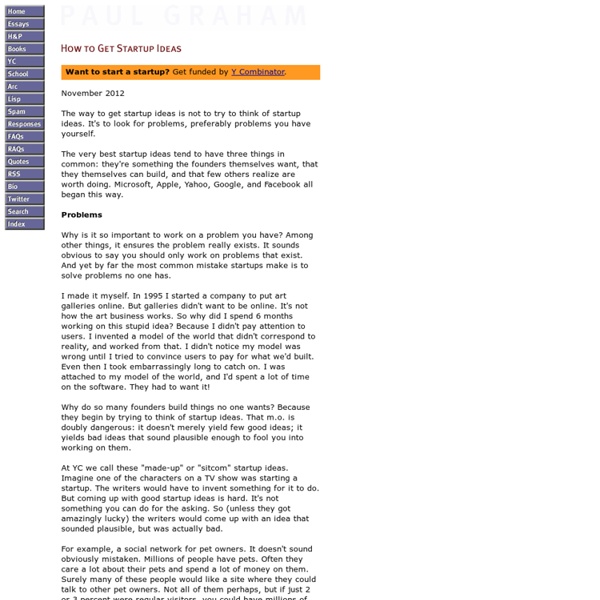 November 2012 The way to get startup ideas is not to try to think of startup ideas. It's to look for problems, preferably problems you have yourself. The very best startup ideas tend to have three things in common: they're something the founders themselves want, that they themselves can build, and that few others realize are worth doing. Microsoft, Apple, Yahoo, Google, and Facebook all began this way. Problems Why is it so important to work on a problem you have? I made it myself. Why do so many founders build things no one wants? At YC we call these "made-up" or "sitcom" startup ideas. For example, a social network for pet owners. The danger of an idea like this is that when you run it by your friends with pets, they don't say "I would never use this." Well When a startup launches, there have to be at least some users who really need what they're making—not just people who could see themselves using it one day, but who want it urgently. You don't need the narrowness of the well per se.

The Games Startups Play Every startup plays two complementary games–the air game and the ground game. The air game is always more romantic. It is the emotional narrative of how your startup revolutionizes a market. Viral marketing is not a marketing strategy Many times, viral marketing is seen as a “marketing strategy” that is interchangeable with other methods of acquiring users. That is, you go through three steps: Develop your productThink through a plan on how to make people use itDeclare viral marketing is one of N approaches (along with SEO, SEM, PR, etc.) Or perhaps you already have an existing product, and you have gotten interested in using a Facebook widget or something like that to make it “viral.”

The Strategy Trap “They were worried that I would get bogged down in wanting to do things, not just create strategy.”- David Polinchock / @lbbinc One of the topics covered during the #LikeMinds Summit this past weekend was precisely this: The chasm between strategy and execution, especially as businesses struggle to understand how to leverage, integrate and operationalize Social Communications (what you do with social media platforms) in the coming 6-24 months. Unfortunately, because the C-suite tends to look to itself when it comes to “strategic masterminding,” the focus too often shifts from execution at the customer level (the most important thing a business should be focusing on on) to… being the guy who came up with the game-changing strategy that will secure more funding and increase influence within the organization. When this happens, strategy becomes a product, and that’s bad.

Paul Graham on Building Companies for Fast Growth Paul Graham's appetite for small talk is waning. "Are we starting yet? Is this the interview?" he stops midsentence to ask on a hot summer afternoon in June. It's hard to blame Graham, an angel investor known for being brusque, for placing a premium on his time. If there's one thing he values, it's speed. Here's What The Average Tech Startup Looks Like Between reading GeekWire every day, watching the Tech Stars Seattle Demo Day pitches, seeing the latest infographic from Gist, talking to Angels and VCs, and discussions with fellow venture backed entrepeneurs, I have lately been wondering what the “average” tech startup looks like today. It is a lot smaller than I had thought. To help answer this question, I turned to the detailed information published on the Tech Stars web site. This is a treasure trove of statistics, listing 104 graduate startups, from the initial 2007 class in Boulder to the Spring 2011 classes in Boulder, Boston, and New York (including 2010 Seattle, but not the Fall 2011 Seattle graduates). Unfortunately, YCombinator and 500 Startups do not post equivalent data on their 350+ similar graduates, but 104 is quite a good sample size. First to note, is that although Tech Stars is five years old, 84 of the 104 companies listed are less than three years old.

Startup advice, briefly This is a very short summary with lots left out—here is the long version: You should start with an idea, not a company. When it’s just an idea or project, the stakes are lower and you’re more willing to entertain outlandish-sounding but potentially huge ideas. Why Wesabe Lost to Mint - Marc Hedlund's Blog A number of people have asked and speculated about why the company I co-founded, Wesabe, shut down earlier this summer. Some of the claims or guesses about it are just factually wrong; others seem misinformed to me; others seem to have some truth. I thought I’d add my own opinion. In November 2006, Wesabe launched as a site to help people manage their personal finances. We certainly weren’t the first to try to tackle this problem through a web app, but we were the first of a new wave of companies that came out in the months that followed, characterized but what some would call a Web 2.0 approach to the problem. Even before we launched, we heard about other people working on similar ideas, and a slew of companies soon launched in our wake.

Lean Startup Lean startup is a methodology for developing businesses and products. The methodology aims to shorten product development cycles by adopting a combination of business-hypothesis-driven experimentation, iterative product releases, and validated learning. The central hypothesis of the lean startup methodology is that if startup companies invest their time into iteratively building products or services to meet the needs of early customers, they can reduce the market risks and sidestep the need for large amounts of initial project funding and expensive product launches and failures.[1][2] History[edit] Although the lost money differed by orders of magnitude, Ries concluded that the failures of There, Inc. and Catalyst Recruiting shared similar origins: "it was working forward from the technology instead of working backward from the business results you're trying to achieve.

Why Startups Fail « vcdave An entrepreneur recently asked me why startups fail. Startups fail because they run out of money. You’re probably thinking, “Tell me something I don’t already know!” Play by your own rules. — Work & Education In January of 2008 some friends and I launched PackRat, an early social game on Facebook. Eight months later, in August, we gave PackRat a cash-backed virtual currency. By December we were turning over $200,000 in monthly revenue. Not too shabby for a team of eight. About the same time we began exploring themes for other game-like experiences to build. How To Build a Web Startup – Lean LaunchPad Edition If you’re an experienced coder and user interface designer you think nothing is easier than diving into Ruby on Rails, Node.js and Balsamiq and throwing together a web site. (Heck, in Silicon Valley even the waiters can do it.) But for the rest of us mortals whose eyes glaze over at the buzzwords, the questions are, “How do I get my great idea on the web? What are the steps in building a web site?” And the most important question is, “How do I use the business model canvas and Customer Development to test whether this is a real business?”