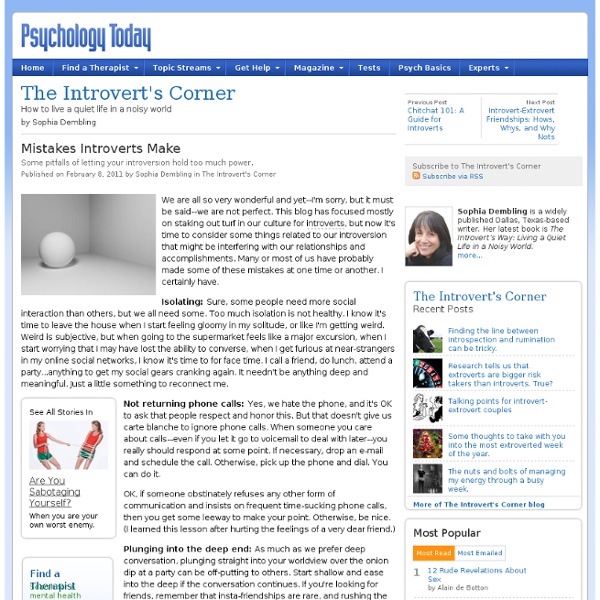 We are all so very wonderful and yet--I'm sorry, but it must be said--we are not perfect. This blog has focused mostly on staking out turf in our culture for introverts , but now it's time to consider some things related to our introversion that might be interfering with our relationships and accomplishments. Many or most of us have probably made some of these mistakes at one time or another. Sure, some people need more social interaction than others, but we all need some. Yes, we hate the phone, and it's OK to ask that people respect and honor this. OK, if someone obstinately refuses any other form of communication and insists on frequent time-sucking phone calls, then you get some leeway to make your point. As much as we prefer deep conversation, plunging straight into your worldview over the onion dip at a party can be off-putting to others. Ah, the dreaded babble. If you suddenly realize you've careened into a long monologue, take a breath and look around.

12. How Your Greatest Insecurities Reveal Your Deepest Gifts In my decades of practice as a psychotherapist, this is the insight that has inspired me most: Our deepest wounds surround our greatest gifts. I've found that the very qualities we're most ashamed of, the ones we keep trying to reshape or hide, are in fact the key to finding real love. It's so easy to get lost in the quest for self-improvement. Over the years, I realized that the characteristics of my clients which I found most inspiring, most essentially them, were the ones which frequently caused them the most suffering. Some clients would complain of feeling like they were "too much"; too intense, too angry, or too demanding. Other clients said they felt that they felt like they were "not enough"; too weak, too quiet, too ineffective. Clients would describe lives devastated by codependency, and I would see an immense generosity with no healthy limits. Again and again, where my clients saw their greatest wounds, I also saw their most defining gifts! © 2011 Ken Page,LCSW.

A Lesson on Forgiveness The Buddha was sitting under a tree talking to his disciples when a man came and spit on his face. He wiped it off, and he asked the man, “What next? What do you want to say next?” The man was a little puzzled because he himself never expected that when you spit on somebody’s face, he will ask, “What next?” He had no such experience in his past. Buddha’s disciples became angry, they reacted. Buddha said, “You keep silent. “If you think on it deeply,” Buddha said, “he has spit on his own mind. The man was even more puzzled! Puzzled, confused, the man returned home. The next morning he was back there. The man looked at Buddha and said, “Forgive me for what I did yesterday.” Buddha said, “Forgive? “And you also are new.

The Benjamin Franklin Effect The Misconception: You do nice things for the people you like and bad things to the people you hate. The Truth: You grow to like people for whom you do nice things and hate people you harm. Benjamin Franklin knew how to deal with haters. Born in 1706 as the eighth of 17 children to a Massachusetts soap and candlestick maker, the chances Benjamin would go on to become a gentleman, scholar, scientist, statesman, musician, author, publisher and all-around general bad-ass were astronomically low, yet he did just that and more because he was a master of the game of personal politics. Like many people full of drive and intelligence born into a low station, Franklin developed strong people skills and social powers. Franklin’s prospects were dim. At 17, Franklin left Boston and started his own printing business In Philadelphia. As clerk, he could step into a waterfall of data coming out of the nascent government. What exactly happened here? Let’s start with your attitudes. By Fernando Botero

Your Music, Your Personality Just as a glimpse inside a bedroom or office provides clues about someone's character, so too can a peek at his music collection. The question "What kind of music do you like?" is so revealing, it is the number one topic of conversation among young adults who are getting to know each other, according to psychologists Jason Rentfrow of the University of Cambridge in the U.K., and Sam Gosling at the University of Texas at Austin. Knowing whether a person prefers John Coltrane to Mariah Carey, or Puccini to Prince allows for remarkably accurate personality predictions, their research has found. What do your tunes say about you? PT faces the music. Get Into Their Groove Strangers can accurately assess another person's level of creativity, open-mindedness and extroversion after listening to his or her top 10 favorite songs. Smart Sounds Fans of jazz, classical and other "complex" music typically have above-average IQ scores. Easy Listeners Drama Queens Parental Advisory Boom Town Brain Invasion

1. Get Anyone to Like You, Instantly Get anyone to like you - Instantly - Guaranteed If you want people to like you, make them feel good about themselves. This golden rule of friendship works every time - guaranteed! The principle is straightforward. If I meet you and make you feel good about yourself, you will like me and seek every opportunity to see me again to reconstitute the same good feeling you felt the first time we met. The simple communication techniques that follow will help you keep the focus of the conversation on the person you are talking to and make them feel good about themselves. The Big Three Our brains continually scan the environment for friend or foe signals. Eyebrow Flash The eyebrow flash is a quick up and down movement of the eyebrows. Head Tilt The head tilt is a slight tilt of the head to one side or the other. Smile A smile sends the message "I like you." Empathic Statements Empathic statements keep the focus on the other person. Example 1 George : I've been really busy this week. Example 2 Flattery

6 Questions That Will Make You Fee Peaceful and Complete “The best place to find a helping hand is at the end of your own arm.” ~Swedish Proverb When I was in my mid-twenties an unhealthy relationship with an unhealthy guy sent me packing off to the corner of New Mexico to find myself. In a new age, self-discovery kind of world—a hubbub of a town filled with people in transition—I was graced to meet many powerful healers, gurus, shamans, and teachers. I became a workshop junkie. I got rolfed, (and got more intense body-work by thick-boned Maoris) and rebirthed with conscious breath work. I went on vision quests in the desert, called leading psychics, mapped my astrological chart, figured out my Enneagram number, dreamed lucidly for nights in an upright chair, and drew down the moon in Wiccan circles. I know. I was a perpetual seeker. Even though my unhealthy relationship was dysfunctional, that man gave me a gift that I wouldn’t discover for years. Whether he meant it or not, he would say: What’s not to love about you? 1. 2. 3. 4. 5. 6.

The Mysterious Power of Small Talk - DYSKE.COM “Small talk” has been a bane of my existence all my life. I could never figure out why small talk has such a critical role in socializing with others. Why is it that trying to talk about particle physics at a party is looked down on? In fact, why are parties necessary in the first place? Why can’t we just meet with one another, sit down in a quiet place and exchange our knowledge and insights? As silly as it may sound, this question has baffled me all my life. The British anthropologist and evolutionary psychologist, Robin Ian MacDonald Dunbar, has a possible answer: What we call “small talk” or even “gossip” is what our language was originally intended for. When we humans work as a team, the combined effect can be greater than the sum of its parts. This is an incredible theory. Assuming that Dunbar’s theory is correct, we can now answer my lifelong questions mentioned above. But what if your goal in life is to be as independent and self-sufficient as possible?

10 Frisson-Inducing Songs (And the Definition of Frisson) Email Frisson is a word that comes from French meaning “a sudden, passing sensation of excitement; a shudder of emotion;” It can often be felt when listening to particularly moving songs, or emotionally fraught moments in movies. Also real life, but it’s hard to link to real life. Of course, frisson is hard to explain, but easy to demonstrate. For that purpose, here’s a list of 10 songs, in no particular order, that are likely to cause frisson. 1. An ethereal-sounding post-rock band from Iceland, Sigur Ros exemplify why people are rightfully enthralled and terrified by Iceland. 2. Jeff Buckley recorded this Leonard Cohen cover in 1994. 3. Steven Sharp Nelson is a cello performer who has recorded a number of popular covers of songs using solely or principally cellos. 4. “What are you tryin’ to tell me here, little man? 5. This piece, composed in 1910, is scored to resemble an organ in sound by dividing the orchestra into three separate sections. 6. 7. 8. 9. 10. Bonus Video: Miracle (2004)

13. Six Clues to Character Seconds after Tamara was ushered into his office, Michael knew she was right for the creative staff of the advertising team he ran. Within a year, they were not only a productive duo professionally, they were dating. She soon jumped to another agency largely so they could live together openly. A year later, they were married and enacting their plan to start a boutique agency together. The harder she worked, the more Michael's praise got under Tamara's skin; she grew to hate being viewed as indefatigable. It's taken over two rocky years for the shame , the anger , and the disappointment to subside. Does any one of us know who our lovers, our friends, our business partners, our children—and even we ourselves— will become, especially when tossed into a new set of circumstances? Even with children, development is not a mystery, says Susan Engel, a psychologist at Williams College. Some are traits, more or less wired into personality—such as basic level of interest in others.