How to Think Like Sherlock Holmes: Lessons in Mindfulness and Creativity from the Great Detective 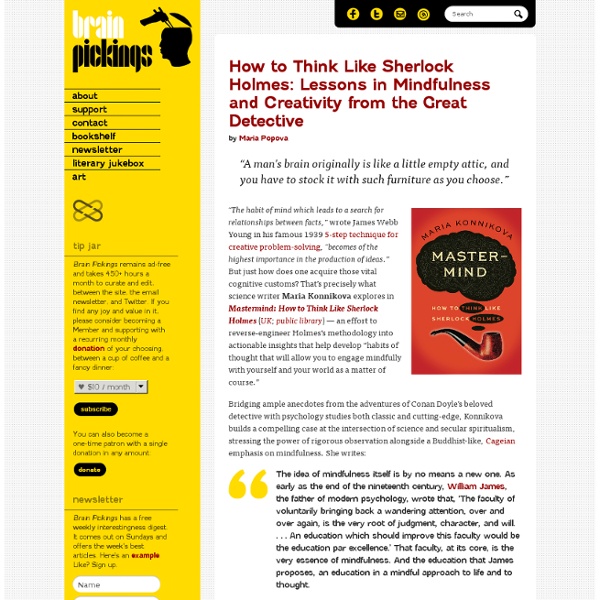 by Maria Popova “A man’s brain originally is like a little empty attic, and you have to stock it with such furniture as you choose.” “The habit of mind which leads to a search for relationships between facts,” wrote James Webb Young in his famous 1939 5-step technique for creative problem-solving, “becomes of the highest importance in the production of ideas.” But just how does one acquire those vital cognitive customs? That’s precisely what science writer Maria Konnikova explores in Mastermind: How to Think Like Sherlock Holmes (UK; public library) — an effort to reverse-engineer Holmes’s methodology into actionable insights that help develop “habits of thought that will allow you to engage mindfully with yourself and your world as a matter of course.” The idea of mindfulness itself is by no means a new one. It is most difficult to apply Holmes’s logic in those moments that matter the most. Our intuition is shaped by context, and that context is deeply informed by the world we live in.

[A team of neurobiologists found that] “if social... [A team of neurobiologists found that] “if social conformity resulted from conscious decision-making, this would be associated with functional changes in prefrontal cortex, whereas if social conformity was more perceptually based, then activity changes would be seen in occipital and parietal regions.” Their study suggested that non-conformity produced an associated “pain of independence.” In the study subjects the amygdala became most active in times of non-conformity, suggesting that non-conformity—doing exactly what we didn’t evolve to do—produced emotional distress. From an evolutionary perspective, of course, this makes sense.

Brian Eno’s Reading List: 20 Essential Books for Sustaining Civilization by Maria Popova Deconstructing a magnificent mind through his reading diet for intellectual survival. UPDATE: The folks from the Long Now have kindly asked me to contribute to the Manual for Civilization library — here is my own reading list. There is something inescapably alluring about the reading lists of cultural icons, perhaps because in recognizing that creativity is combinatorial and fueled by networked knowledge, we intuitively long to emulate the greatness of an admired mind by replicating the bits and pieces, in this case the ideas found in beloved books, that went into constructing it. After the reading lists of Carl Sagan, Alan Turing, Nick Cave, and David Bowie, now comes one from Brian Eno — pioneering musician, wise diarist, oblique strategist of creativity — compiled for the Long Now Foundation’s Manual for Civilization, a collaboratively curated library for long-term thinking.

Leo Tolstoy on Finding Meaning in a Meaningless World by Maria Popova “For man to be able to live he must either not see the infinite, or have such an explanation of the meaning of life as will connect the finite with the infinite.” Shortly after turning fifty, Leo Tolstoy succumbed to a profound spiritual crisis. With his greatest works behind him, he found his sense of purpose dwindling as his celebrity and public acclaim billowed, sinking into a state of deep depression and melancholia despite having a large estate, good health for his age, a wife who had born him fourteen children, and the promise of eternal literary fame.

Ernest Hemingway’s reading list for a young writer, 1934 In 1934, a young student Arnold Samuelson read Ernest Hemingway’s short story “One Trip Across.” Inspired by what he had read, the 22-year-old decided to travel across America to visit the author and ask his advice about writing. Samuelson had just finished a journalism course at the University of Minnesota and had ambitions to become a writer. He packed a bag and hitch-hiked his way down to Key West. When he arrived, he found the place, like the rest of America, in the grip of the Depression. He spent his first night sleeping rough on a dock, and was woken during the night by a policeman who invited Samuelson to sleep in the local jail.

only the gods are real Hello! A few notes: first off... if you have not read American Gods... well, you definitely should! But you also probably should not read this website until you have done so, because there are some plot spoilers involved here. Sorry. Psychoanalyst Adam Phillips on Our Capacity for “Fertile Solitude” by Maria Popova From teenage rebellion to self-reliance, how we learn to be alone. “All of humanity’s problems,” the French scientist and philosopher Blaise Pascal wrote in 1654, “stem from man’s inability to sit quietly in a room alone.” Three centuries later, the great Russian filmmaker Andrei Tarkovsky shared his single most urgent piece of advice to the young: learn to enjoy your own company. And yet today, in the golden age of solo living, Pascal’s words ring all the more urgently true and Tarkovsky’s counsel seems all the more unattainable.

How to Find Yourself by Maria Popova “Little triumphs are the pennies of self-esteem.” At the age of twenty-one, artist and writer James Harmon chanced upon a copy of Rilke’s Letters to a Young Poet and found himself mesmerized. Rilke’s elegant exploration of the deepest human concerns — love, fear, art, doubt, sex — prompted young Harmon to wonder what the best advice to young people might be a century after Rilke — something that stood as an antidote to the “toxic cloud of tepid-broth wisdom” found in books “with the shelf life of a banana” that the contemporary publishing world peddled, so he reached out to some of the most “outspoken provocateurs, funky philosophers, cunning cultural critics, social gadflies, cyberpunks, raconteurs, radical academics, literary outlaws, and obscure but wildly talented poets. One of the most refreshing letters in the anthology comes from the American novelist, essayist, and journalist Florence King (b. 1936). King writes:

The Universe, “Branes,” and the Science of Multiple Dimensions by Maria Popova How a needle, a shower curtain, and a New England clam explain the possibility of parallel universes. “The mystery of being is a permanent mystery,” John Updike once observed in pondering why the universe exists, and yet of equal permanence is the allure this mystery exerts upon the scientists, philosophers, and artists of any given era. The Universe: Leading Scientists Explore the Origin, Mysteries, and Future of the Cosmos (public library) collects twenty-one illuminating, mind-expanding meditations on various aspects of that mystery, from multiple dimensions to quantum monkeys to why the universe looks the way it does, by some of the greatest scientific thinkers of our time. It is the fourth installment in an ongoing series by Edge editor John Brockman, following Thinking (2013), Culture (2011), and The Mind (2011).

The Best Brain Pickings Articles of the Year by Maria Popova The psychology of the perfect daily routine, how to criticize with kindness, the creative purpose of boredom, Kafka on what books do for the soul, and more. After the annual reading list of the year’s best books overall, it’s time for the annual summation of the best Brain Pickings articles of the year — “best” meaning those most read and shared by you, as well as those I took the most pleasure in writing. Please (re)enjoy and have an inspired, stimulating, infinitely rewarding new year.